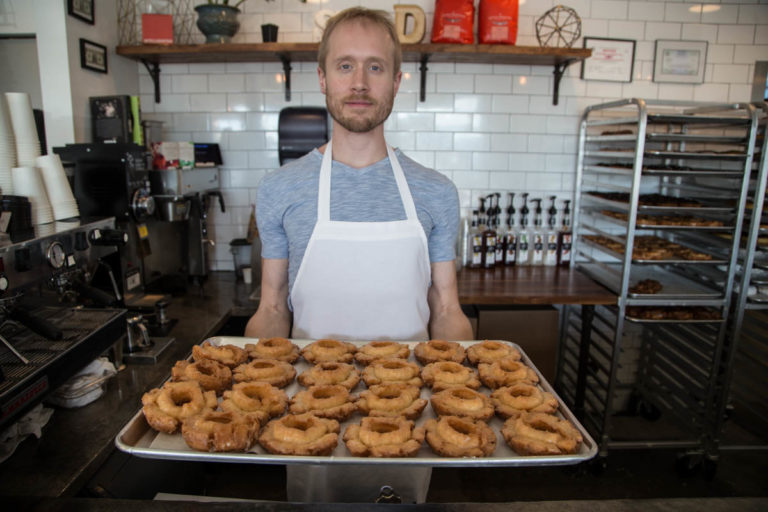 A homegrown Knoxville business is opening its second location in the city at 418 South Gay Street, former home of Downtown Grind. Once more you’ll be able to get a full line of coffee drinks in the spot but, unlike before, you’ll have a range of choices in gourmet doughnuts.

Status Dough is owned by Jimmy and Karen Wooten and Joe Seiber. The team brings a range of complementary skills to the business and that combination has provided a strong start for their company at the Bearden location. I met with Jimmy to talk about the team, the business and the new location.

Jimmy is from Knoxville, while Karen grew up in Oak Ridge and Joe has family roots in the area. Jimmy attended Karns High School and UT from which he graduated in 2003 with a degree in Business Administration and Spanish with a focus in Marketing. He worked for the Regas family while in college, helping them open Riverside Tavern in 1999.

He was friends with Joe (who also graduated from UT) in college and the two eventually worked together at Riverside Tavern. Jimmy worked his way up to bartender in 2004 and moved to Parkside Tavern where he stayed until 2007. For a time it seemed they would leave the culinary world. Joe moved to Nebraska and Jimmy worked in Real Estate, though he says he remained connected to the restaurant business. Karen had gotten her English degree from UT and, while the three kept in touch, it didn’t appear likely they would ever again live in the same city, let alone work together.

Joe eventually landed back in Chicago where he has family. He learned the family recipes for doughnuts and worked on the craft of making the doughnuts at various Chicago restaurants. Jimmy says, “Whether we knew it or not, the restaurant industry is in our blood and we wanted to get back to it.”

In March of 2016 Jimmy and Karen visited Joe in Chicago and learned he wanted to move back to Knoxville. They began talking about opening a business and became convinced that Joe’s new doughnut skills were a perfect match for Jimmy’s marketing and business background. Karen would utilize her background and skills to manage both social media and front-of-house, working with baristas. They felt Knoxville was under-served with craft doughnuts at the time.

Jimmy and Karen had lived in the Bearden area for a dozen or so years and felt it had new energy around Bearden Hill. “I saw a lot of vitality pumped back into the area and had a gut feeling it was a good time.” In 2016, the group signed a lease and opened in March 2017 to a rousing response. “For the first month we had lines wrapped around the block.” He notes that they feel a part of that community, just as they hope to become a part of the downtown community. He takes pride in the fact that seventy-to-eighty percent of their business comes from repeat customers.

According to Jimmy, a second location was always in his plans. “We always knew we would open a second location. It had to be the right time and place.” As it happens, the connection that would lead them to their second location was already in place. They had only one wholesale customer and that was Nolan Sherrill, co-owner and operator of the Phoenix Pharmacy and Fountain. He uses their doughnuts to make his sundaes and the occasional bread pudding.

In late 2017, Nolan approached them about opening a second location in the space which was the former Downtown Grind — a space his father acquired from Eddie Mannis. They continued the conversation for nearly a year and by the fall of this year became convinced they should move ahead.

“People I know who live downtown don’t want to leave to drive. It’s also a destination: Local tourists maybe come here to eat, walk to the park, see a movie. We all like the downtown vibe and want to be a part of this community.” He said he feels like the two locations will help each other by increasing the number of people who know the brand.

It’s also not as if they don’t know downtown. Karen worked for some time as a grant writer for Dogwood Arts and is currently on the board at Blount Mansion. She also worked for a time at Cafe Four. Jimmy says they know many of the downtown restaurateurs and, as mentioned, have an ongoing relationship with the Sherrills.

The new shop will be similar to the one out west, which you see pictured here, though he says it will adapt and change as it goes to suit the new location and customer base. He says you’ll find that they really care about both the coffee and the confections. (In the interest of professional journalism, I felt obligated to sample both the coffee and the doughnuts while taking photographs. Both were excellent and you are welcome!)

The coffee is Intelligentsia out of Chicago. They feel strongly it was the best coffee on the market and insisted that too much work went into the doughnuts to pair it with a lesser coffee. You can get the full range of lattes, cappucinos, espressos and more, as well as a good, simple cup of coffee.

The doughnuts are based on Joe’s family recipes and they offer a wide range of yeast doughnuts, cake doughnuts, fritters and the full range you’d hope to see. When they say everything is made from scratch, that’s what they mean. Whether it is the ganache, the vanilla icing, the Boston cream or any of the other glazes and fillings, they do it all in house “just like it’s been done for years. You’ll taste the ingredients, not just sugar.

The new space will be re-arranged to allow for more seating all along the front beside the windows. Integrity Construction, who built out the other space, is handling this job, as well. You’ll also be able to mix-and-match between Status Dough and Phoenix Pharmacy and Fountain. Say your party is arguing over ice cream or doughnuts, everybody can get what they want and meet on either side. They will start with inside seating, but will probably add outside seating as the weather warms.

The shop should be open early in the new year, most likely sometime in January. You can find the full menu and prices here.