The Crozier Reaches the Finish Line: A Look Inside 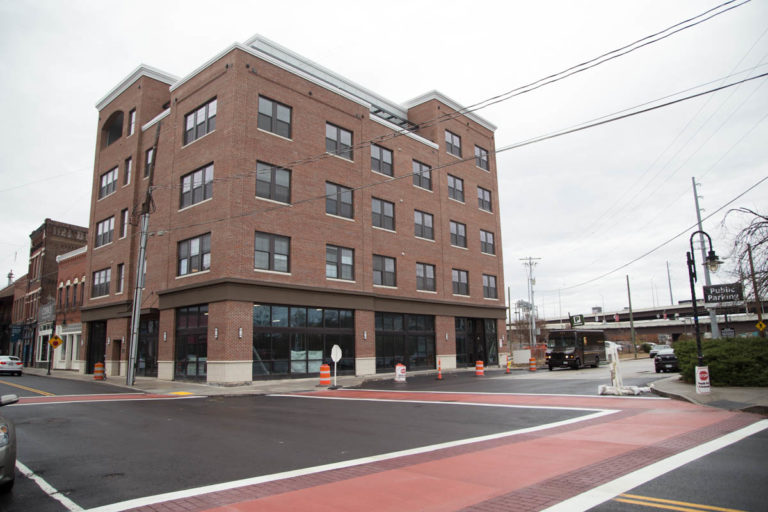 The Crozier, Corner of Central and Willow, Knoxville, December 2018

It was November 2015 when I first reported that a building on the corner of Willow and Central would be demolished for a much larger (and nicer) building which would host both commercial and residential space. By October 2016, challenges had been encountered on the site and the building had been redesigned to be taller. It’s been a journey.

I met with Daniel Smith last week to walk through the new building, which is still in the process of finishes to see what the response has been and where the development stands. We entered through the commercial space, which faces both Willow and Jackson, on the ground floor.

There will be two businesses on the ground floor of the building. Neither have been officially announced, but one will have a large corner space with exposure to both streets. The other will have, perhaps, the most interesting footprint of any business on the city, with entrances on both Willow and Jackson in a space shaped like an L and wrapping around the other business.

As a result of geological realities, the original building plans were changed to include a basement. Once that decision was made, the developers were able to increase the height of the building as they’d already had to assume the cost of a deeper foundation. The result is two sections in the basement. One will be devoted to storage for residents and the other is currently planned for office space, though that use is still fluid.

Of the residential units, there are a total of nineteen ranging from one bedroom to a single three-bedroom unit. Sixteen of the homes are under contract and owners have begun moving in their belongings. Buyers have represented a range, from people who are moving locally to some from outside Knoxville. Some owners purchased their unit for a second home and some purchased to rent until they can retire to Knoxville in the coming years.

The units were sold from the top down and we started our tour in the penthouse. Some of the owners have waited for as much as a year to take possession. Larger than the other units, it features upgraded finishes and a wrap-around balcony. I didn’t shoot much inside because work was continuing, but the views from the balcony are enough to sell it.

There are four units on the top floor and five on each of the three floors below it. Some homeowners, including those on the top floor, have made substantial upgrades to their homes, meaning the sales price will not reflect what the homes will be worth on resale. The one-bedroom condos each have small balconies.

One of the units available, 201, features a second-floor view of Central Street that I loved, and at just over 1300 square feet, it felt spacious. The realtor representing the development is Kimberly Dixon Hamilton at Downtown Realty, Inc. If you are interested in learning more about one of the remaining units, you may contact her by clicking the ad at the top of this page or by calling 865-588-5535.

One final note: I couldn’t resist the chance to ask about Stockyard Lofts which is scheduled to be constructed adjacent to the Crozier and shares some of the same developers. The current schedule calls for breaking ground February 1 with a projected completion timeline of nineteen months, meaning the apartments would be ready for occupancy in the fall of 2020.