A New Downtown Building Gets Taller 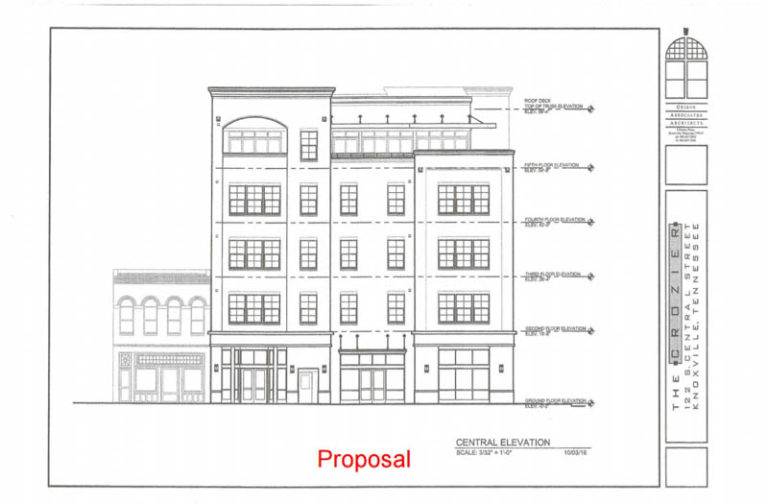 The Crozier, a building proposed for the Old City just got a bit taller, which might seem odd since it is currently an oft-remarked hole in the Old City where Big Don’s used to reside at the corner of Willow and Central. When I first reported the pending development, almost a year ago, plans called for an attractive four-story building. Follow that link to details regarding the units and retail. Most of those remain the same.

What has changed is the structure required the deep footings and substructure visible on the site. Testing prior to construction revealed the structure would need more support given what lay underneath the top soil. Once done, that presented a clear opportunity and an option that made the project more economically viable. A basement became the obvious opportunity and the use for that hasn’t been established. It could be retail, though basement-level retail is difficult and bowling alleys are hard to come by. More likely might be storage for units above, whether for lease or deeded. The opportunity presented by the more extensive foundation was the addition of a fifth floor. Hence the new proposal.

The Downtown Design Review Board approved the new design at its meeting last Wednesday, but not without some discussion. For those of us with no urban design or architectural educational background, the conversations there are often instructional. The setbacks on the roof, where there is both a private (under the arch) and public roof-top patio were discussed thoroughly, as were materials. The building will have brick on all its street-facing sides. Also discussed: Scale and density, two sometimes conflicting values in the urban environment. The arch itself was also discussed and may be removed. The appendage on the left side of the building (facing it) includes required stairway access. The private balcony comes off a three-bedroom unit with 1800 square feet. Units facing Willow are two bedroom and the fourth, and final, unit is a one-bedroom on the back. Plans have called for selling the units, though downtown real estate prices have moved sharply upward in the last year, so the price previously reported are probably low. Prices will probably range from the 200’s to the 300’s for most of the units.

The street level is being constructed for maximum flexibility, to allow one large retailer or several smaller ones facing Central and Willow. One additional tidbit mentioned in the meeting: the same group has purchased the parking lot on the opposite corner, though no plans have been announced for it at this time. Despite extensive delays and the absence of any discernible activity on the there for some time, assurances were given that construction will start right away, with a hoped-for completion of mid-to-late 2017.