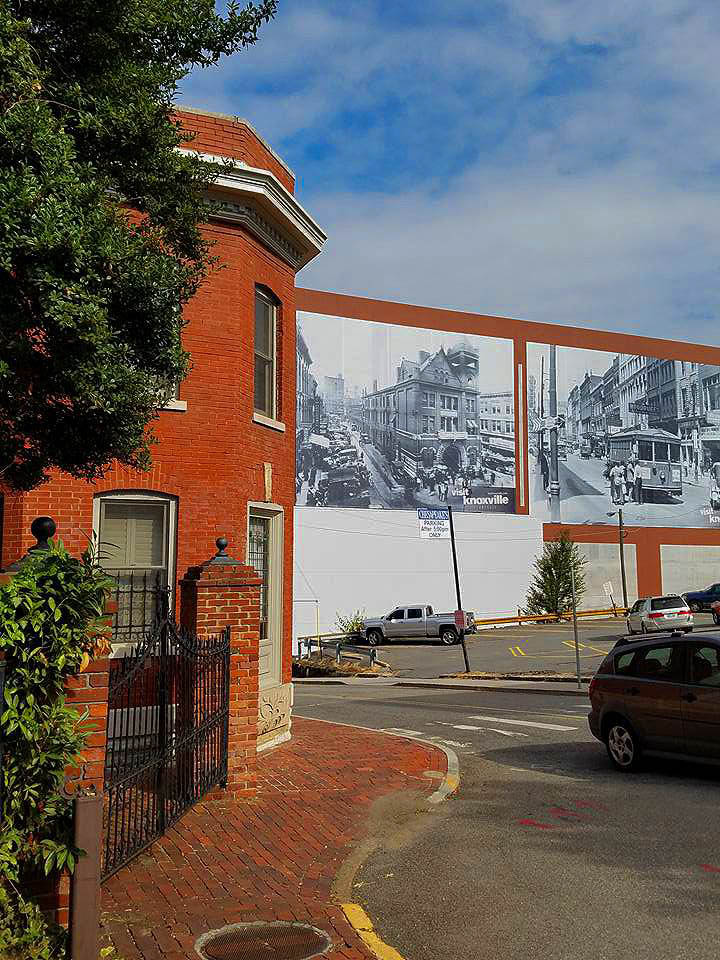 David Denton, who has written on this site  a number of times, offered a column on his opinion of the historic murals on the Walnut Street Garage. My observation is that visitors and residents alike have been interested, amazed, pleased and impressed. I often have conversations with pedestrians stopped beside the current photographs viewing the old. It’s quite striking. Here’s David’s take on the topic (along with his photographs):

Congratulations to Bill Lyons of the Mayor’s office and others who assisted in bringing about those spectacular photo murals on the Walnut Street Garage.  What started out presumably as an oversight resulted in a block long concrete blank wall with no fenestration and minor attempted decoration by way of some painted stripes.  The resulting, massive wall certainly got a lot of attention.

But now that attention is praise and appreciation.  I haven’t gotten tired of looking at the murals, constantly seeing them from different angles peeking between buildings beckoning attention.  It was a very wise decision to hang these banner murals of historic downtown Knoxville.  Those of us who live downtown love the old buildings with all the rich detail.

The Walnut Street Garage was somewhat lacking, at least on this back wall, of architecture. So, the best thing for a building that has no architecture is to give it architecture.  But, of course, for cost reasons anything substantial was probably out of the question.  So, a very good solution was to hang these murals of buildings that did have architecture.  In fact, the problem wall has ended up being the most interesting of the four garage facades.

When I first moved back to Knoxville a few years ago I noticed seemingly everywhere photographs of historic downtown Knoxville especially in waiting rooms and businesses along with the ubiquitous watercolor of a babbling brook set among misty mountains.  Although I enjoy looking at these historic photos, they are pale in comparison to seeing them blown up to almost full size, which makes them so much more immersive particularly set in their original urban context.

It’s not possible to stand back and see all three of them in their entirety.  And this is part of what makes them so intriguing.  Mostly they are viewed as partial vignettes.  They are neither the color of real buildings nor in correct perspective with the real world.  But they transcend these expectations.  This has the wonderful effect from certain angles of transforming the cityscape into an art form.

I walk up and down Clinch Avenue every day and I always look at the part of the murals that can be seen hovering above the Daylight Building.  If any subject other than buildings were selected it would perhaps be written off as just looking like a giant billboard.  But there’s not a message here, no one selling us anything.  It’s just a mirror of ourselves through the prism of history.

The mural as seen from Clinch actually appears to be a larger than real and the perspective of the photo makes it look like it’s actually tilting into the building.  The painted dark red frame above then starts to look like a free span steel beam holding up the top two floors of the office building behind.  This little bit of incongruence turns the whole view into a collage that appears to have more aesthetic intention.

The vignettes of the real surrounding buildings become elements in this far more interesting collage. Where seen from other angles the same phenomenon happens. Looking north on Walnut approaching Union the perspective of the photo appears to be a continuation of the perspective of the Locust Street garage.  It can also be seen from the bridge to the convention center.  It’s subtle but just enough unreal to get one’s attention and add a bit of interest.

The murals make a nice new companion to Kendrick Place connecting it back to the historic core.  No doubt the residents of Kendrick Place must be thrilled to see that blank wall gone and replaced with symbols of appreciation in preserving older buildings.

I don’t know what the lifespan of these murals will be as many of them tend to fade and turn a yellowish color.  Fortunately, since these are old photographs that might not be so bad.  Whenever they need to be replaced, I hope will be in the same spirit.  The only drawback I see to these wonderful murals is now there needs to be more of them around the downtown.  They add interest to the cityscape, connecting us to our historic past and could become a signature for downtown Knoxville.  There are plenty of blank walls ready and waiting.