One New Mural and an Old Mural That Needs Your Help 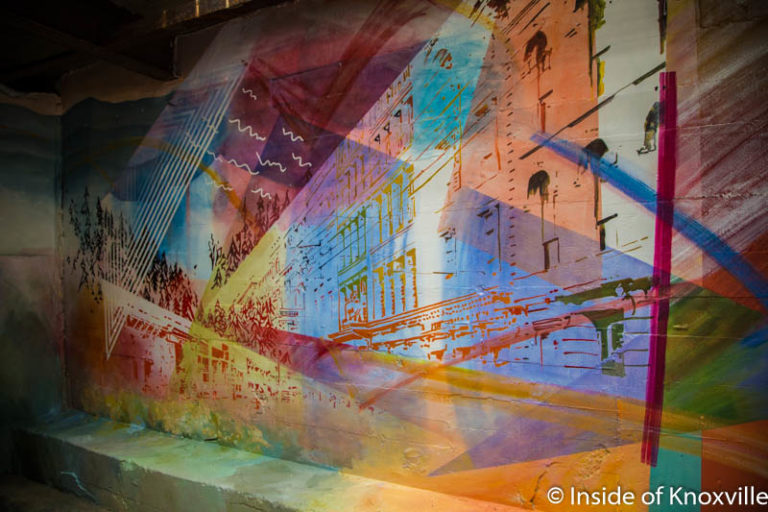 After David’s mural article yesterday, it put me in mind of our other murals. We have a number around town and I’ve written about them before, but it’s been six years. A lot has changed since then. I also learned we have a new one and one that needs our help. Of course, one has disappeared since that first article.

One mural which has been added since that article is that on the side of the Visit Knoxville, Visitor’s Center Building. Designed and painted by local artists Bobbie Crews, Ken Britton, Curtis Glover, Randall Starnes and Walt Fieldsa in 2013, I’ve heard very little but good things said about it. I can also say it has served as an attraction on its own as I’ve observed numerous visitors to the city photographing that side of the building.

I didn’t mention a couple in that first article, though they were already present. G. Byron Peck’s excellent 2000 rendition of a building face in the courtyard between Tomato Head and the Square Room is much less visible now than it was then. Previously visible from across the square, it is now obscured by trees except for the view from the foot of the mural. It’s unfortunate, in that it was designed to provide an optical illusion of a building directly through that space.

Another I didn’t mention at the time, was the mural – or more accurately series of murals – on the back side of the Conley Building. The “Knoxville Music” mural, in four parts, was created by Kathy Wilder Brown and students in 2007. Intended as a commentary on historic segregation in Knoxville, you’ll notice the balcony filled with dark faces over the bluegrass musician.

The London Streetscape designed and painted by Frederick Gardner in 2008 is quite exceptional. I’ve never studied it until now and it’s quite difficult to photograph due to its size and the proximity to the Crown and Goose (so you can’t get distance). I’ve included a number of photographs here so it might be seen in detail. It’s quite exceptional, but it will likely need some love in the not-so-distant future to continue to hold its color.

The Knoxville Music History (Walt Fieldsa, 2000), of course, has been lost since that article. Illustrating so many prominent figures from Knoxville music history, it was a real treasure which, unfortunately, was lost when Leigh Burch (who had since purchased the building) had it painted over.

The most recent addition to our downtown mural stock is less visible from the street. Completed in August of this year by artists Sofia Lacin and Hennessy Christophel, it is quite different from others you’ll see around town. Depicting an abstract collage of urban images, at once universal and rooted in Knoxville, the mural is located on the lowest floor of the Emporium and utilizes not only a large underground concrete surface, but incorporates the columns framing the space.

I spoke to Liza Zenni, Executive Director of the Arts and Culture Alliance, who expressed hopes that when the Jackson Avenue viaduct work is complete, perhaps this underground corridor beneath Gay Street will be more accessible and the mural might be enjoyed by larger numbers of downtown residents and visitors. As it stands, you can see it by entering the Emporium and walking down and under the steps. It’s definitely worth the walk and, I can assure you, my photographs don’t really capture it the way it can be seen in person.

Finally, in the 2010 article, I included the Old City Train Mural (Walt Fieldsa, 2001) located in the courtyard behind what is now Lonesome Dove. If you follow the link to the previous article, you’ll see that the subsequent six years have not been kind to the mural. Considerably faded, it clearly needs help if it is to be sustained.

Patience Melnik, Executive Director of Keep Knoxville Beautiful, is spearheading an effort to restore the mural at an estimated cost of $4,500. On the Indiegogo site, she specifically references the loss of the History of Knoxville Music Mural as an impetus for saving this one, expressing the shock felt at the loss of the other mural.

In an interesting parallel, the building ownership of this mural has also changed since it was first installed. The difference is that these owners, Laura and Shawn Lyke, who have lovingly restored their Old City Building, are very interested in retaining the mural. Kudos to them for their stewardship.

So, can you help? It’s needed badly and it’s a great cause to keep an Old City icon looking great for another fifteen years. Please follow this link and donate as you able. If everyone reading this gave $25, we could fund it today. Please consider it.