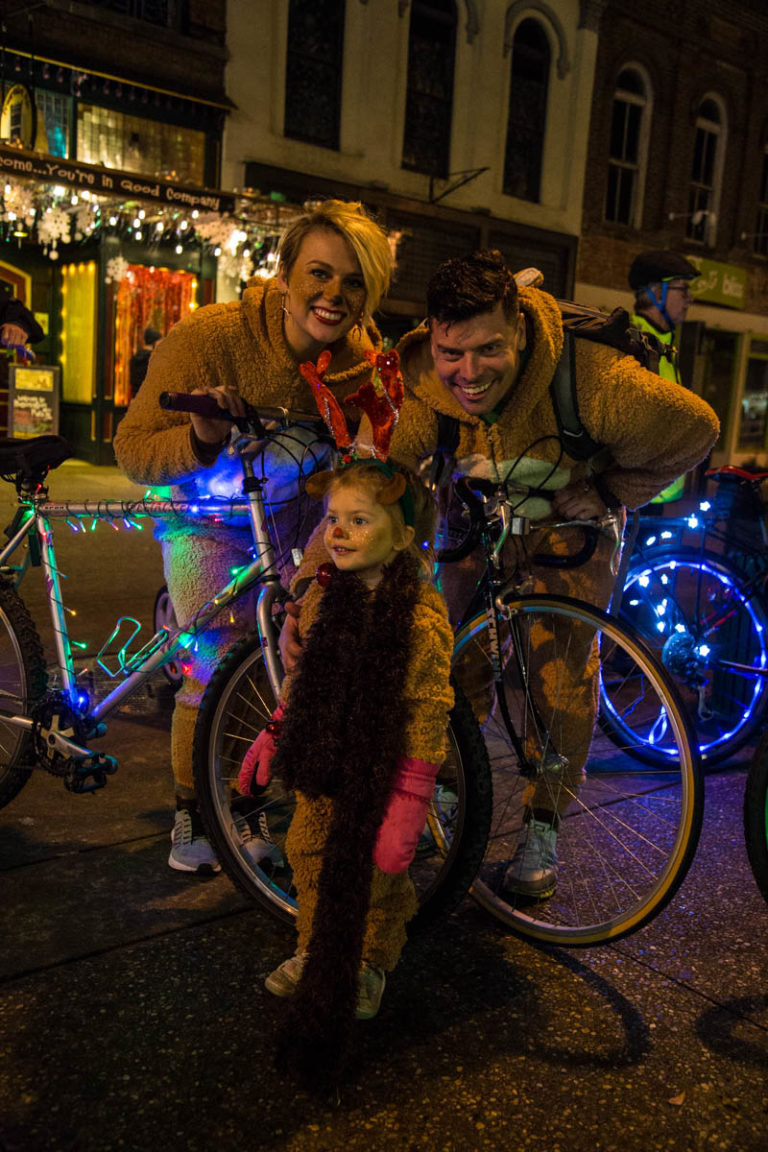 It was a mild, but rainy night that awaited the tricked out bikes and riders for this year’s Tour de Lights. Sponsored by I Bike Knx, this is the twelfth year for the event that has steadily grown with each rendition.

The guesstimate for last year’s ride was “over one thousand,” and early indications were the threat of rain might keep the numbers lower this year. As it turns out, people simply showed up a bit later and, from my vantage, the crowd probably matched last year’s by the time the bikes rolled down Gay Street to start the journey.

There were two staging spots this year, one for families and beginners and another for the experienced riders. During the time I walked around, I didn’t see very many people gathering on Krutch Park in the beginner area. I wasn’t there when they started, so maybe they sorted out by the zero hour. I’m not sure if people didn’t get the word, or simply wanted to be where they’d always been.

I watched this year’s ride on the 100 block. It’s really too bad that it doesn’t draw a bigger crowd of spectators because it’s about as fun as any parade we have through the year. There’s always a surprise or two and even the costumes and decorations used the year before are delightful.

It’s also an eclectic crowd, which is nice for any activity. From children to the elderly, from the fit to the not-so-fit, male and female, everyone joins in the fun. Look closely at the photographs and you’ll see lots of smiles. It’s hard not to smile when you are riding a bike, especially if it’s with a group.

One of the new things I noticed in this year’s event was a significant number of the share bikes being used in the parade. They made their debut last winter and this was the first year they could be used. It was kind of nice to think that you don’t have to own a bike to ride

The children, as always for me, stole the show. Many were being pulled, of course, but more than a few took to the street independently and seemed to be having a good time. The little one on the skateboard blew my mind a little bit. Maybe she got scooped up for part of the journey. I got tired just watching her, though she seemed just fine.

As always, the event showcases the increasing bike ridership in the city and that is a good thing. Every bike ride represents an investment in the environment and one less car parked in the garages and parking lots. If you hate bikes, consider how much easier they make it for you to park.

Serious subjects aside, the event is mostly just good fun and delights not only the people who join in, but those of us who watch, including what I understand was a big crowd where the route crosses Broadway. Vienna Coffee provided warm drinks and a good night was had by all. If you missed it this year, don’t make the same mistake next year.