OneBeat Comes to Knoxville Next Week: Not to Be Missed 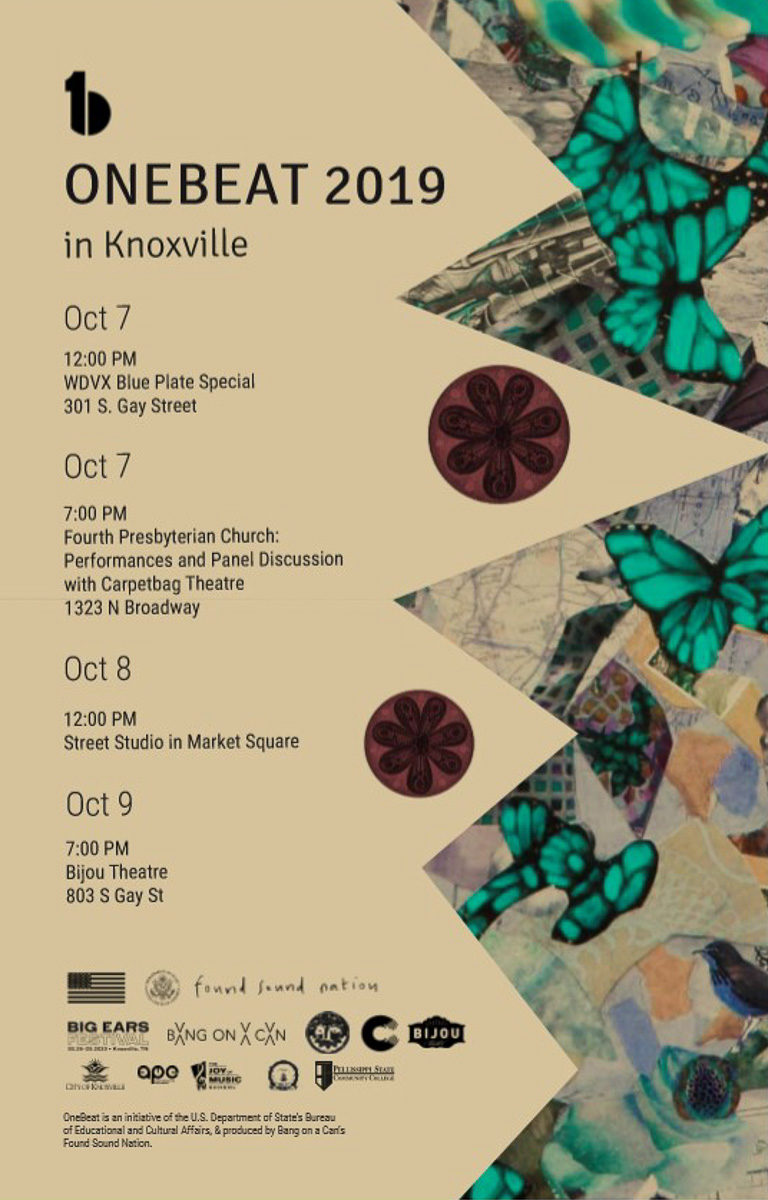 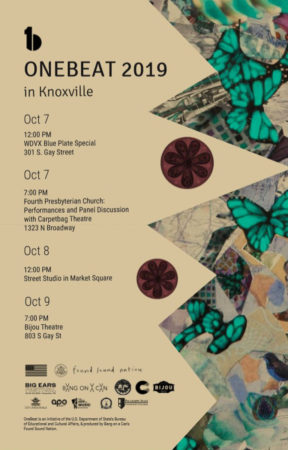 You might be forgiven if scenes around the city next week put you in mind of Big Ears. Big Ears is partnering with OneBeat for a series of events around the city that promise to be fresh and exciting. Each fall, OneBeat brings musicians from around the world to join together in a creative union, making original music and presenting it to select audiences across the U.S. The pairings of musicians, instruments, and musical genres makes for a unique and fascinating journey, and this year Knoxville was chosen as the final stop for the production.

This year marks the eighth iteration of the annual project. According to Elena Moon Park, a co-Director for Found Sound Nation, which designs and produces the program, there are now over two hundred alumni from nearly fifty countries. A few OneBeat alumni collaborated with Found Sound Nation for Mosaic Interactive, which was featured at Big Ears 2019. It proved to be one of the most riveting and powerful performances I witnessed. Elena is originally from Oak Ridge and is excited to bring the group to her East Tennessee home.

The musicians are all accomplished and often they are well known in their home countries. Some perform on traditional instruments that are little known outside their homeland, while others adopt modern instruments, sometimes from other parts of the world. They came together just a few weeks ago, having never met before, and were charged with creating music and assembling a concert through ensembles and solo performances. The result is magical as instruments and genres from opposite sides of the world blend in such a way as to make their connection seem inevitable.

A sample of featured musicians includes:

The list continues with world-class vocalists, DJs, two accomplished oud players, violinists, saxophonists, percussionists, and more. Justin Harrington (AKA Demeanor), Rhiannon Giddens’ nephew, will bring his banjo. Many of these musicians are considered among the best in their country and their combination will be nothing less than spectacular.

On Tuesday, October 8, starting at noon, the group will be on Market Square for a public pop-up recording studio. Passersby will be given the opportunity to contribute sounds, songs, beats, and more as a creative work is compiled in the center of downtown. It’s part performance, part spontaneous composition, and should be fascinating.

The grand finale will take place at the Bijou Theatre at 7:00 p.m. on Wednesday night and will feature the entire lineup in their final performance together before returning to their homes. Elena said we may expect a range of ensembles of musicians, each performing their own compositions as well as solo/duo performances and some scored artistic video.

Tickets are limited to this free event and may be secured here. A $10 donation is suggested at the door, where admission will be first-come, first-served, with the exception of those who secure their tickets in advance. The performance is a one-time opportunity to see these musicians together and, for those who may not have attended Big Ears, it’s an inexpensive opportunity to see the kind of performances you’ve been missing.

The group will also engage students at UT, Pellissippi State, and the Joy of Music School while they are in town spreading the word of interconnectedness through art. Look for an opportunity to join them at one or more of these stops along the way.