“People Where They Are” Speaks to the Past and the Present 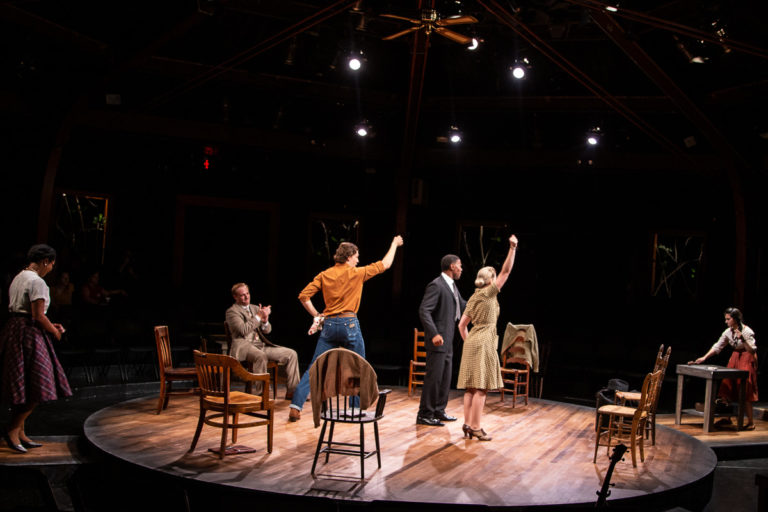 People Where They Are, Clarence Brown Theatre, Knovxville, October 2019

Set in a very divisive time in history, six people gather and explore their shared and different experiences. On the surface, they should be on the same side. But they each believe so strongly in their own reality that initially they can’t see the commonality. Each maintains their own stereotypes and generalizations even as they accuse others of doing the same. Does it sound familiar? A contemporary American drama?

It could be, but it’s not. Set in the 1950s, “People Where They Are,” directed by Calvin MacLean and Dee Dee Batteast, and written by Anthony Clarvoe, focuses on the Highlander Folk Center (later the Highlander Research and Education Center) and its transformation from a focus on organizing workers to a powerful voice in the civil rights movement.

Initially formed in Grundy County, Tennessee, in the 1930s, the center was shut down by the state in 1961 because of its involvement in the Civil Rights Movement. The center was responsible for training many of the leaders of that movement, including Dr. Martin Luther King, Jr. They were involved in the Montgomery Bus Boycott and contributed the song “We Shall Overcome” to the movement via Guy Carawan. (Until his death in 2015, Guy was a presence in the East Tennessee folk music scene, and he and his wife Candie performed at several of the local Bob Dylan Birthday celebrations.)

After being shut down in Grundy County, the center re-organized under the new name and moved to Knoxville. They were here for about a decade before moving to their home in New Market, Tennessee, in 1972, where they are still in operation. Ironically, during the planning for this production, the center was victim to a fire that destroyed decades of historical documents. White supremacy graffiti was found near the site of the fire, underscoring that this production isn’t just about history, but is about an on-going struggle.

Presented in the Carousel Theatre in the round, the set is simple. The production includes only six roles: Collin Andrews as Ned, Jade Arnold as John, Brenda Orellana as Emma, Brittany Marie Pirozzoli as May, Owen Squire Smith as Mr. Carawan, and Aleah Vassell as Mrs. Clark. Based on historic characters, the group assembles for an illegal interracial gathering to share their perspectives on the front lines of their various causes: civil rights, unions, workers rights, and more.

The tension of the times, juxtaposed with the divisions currently being experienced in our country, make for a powerful and provocative theatrical experience. The cast, writer, and directors have crafted a work that pulled me in quickly and put me firmly in that place and time. Issues of racial equality, women’s rights, worker’s rights, and the exploitation of the working class feel very current.

A number of the performances in the run are paired with relevant discussions. Tonight’s performance is “Pay What You Can”, and half the proceeds will go to the Highlander Center. Donations for the center will be taken at the end of each performance for the run, which extends from tonight through October 20. Tickets may be purchased here.