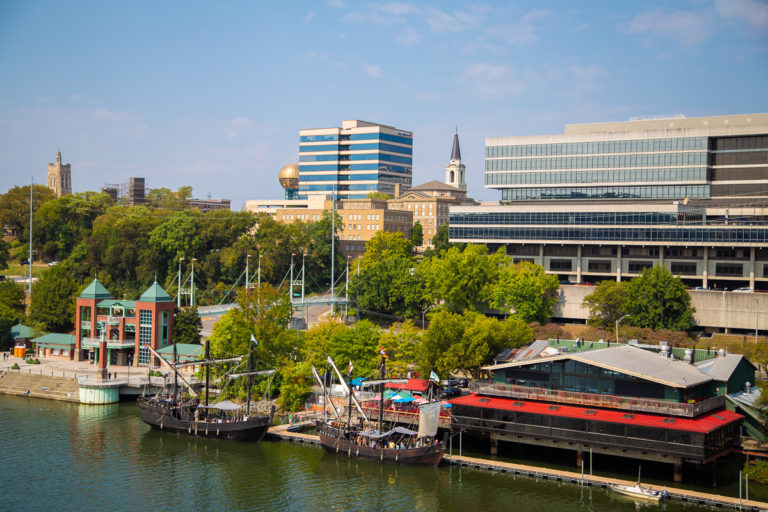 I realize you don’t come here for your weather report but I can’t help myself. The heat is more a personal enemy as I try to walk as much as possible to the places I need or want to go. It hasn’t gotten easier as I’ve gotten older and the temperatures have gotten higher. Thankfully I don’t have a lawn to worry about anymore.

High temperatures in Knoxville, according to Weatherspark.com, should be 85° at the beginning of the month and 76° by month’s end. We ended the month of September in the mid 90s. Enough said. So last Saturday was hot but it was also filled with great activities — albeit with subtexts related to the heat.

The Nina and the Pinta were docked at Calhoun’s on the River where they’d been tied for just over a week. They offered tours of the replica ships and were available for parties. They’ve since slipped down the river to Chattanooga, so you’ll have to travel if you want to catch them. My measure of heat? I first photographed them in the fall of 2013. Notice the colorful leaves in the background. Not so in this year’s picture.

I grabbed a Matt Robb’s biscuit and coffee at the foot of Market Street and enjoyed it in a doorway along the way. Matt was kind enough to fry an egg for my biscuit, and I enjoyed a little conversation with Matt and Nancy while I waited. I sat in a doorway along Market to eat one of what has to be the best biscuits in the city and chatted with a couple about the Pryor Brown Garage across the street.

The annual Over the Edge event was held atop the First Century Bank Building (General Building) at 625 Market Street. Benefiting Restoration House, participants raise money for the opportunity to rappel down the side of the sixteen-story building. A small festival is held at the base with activities for children and a viewing area for the less adventurous well-wishers among us.

I watched the Chick-fil-A cow rappel and couldn’t help but worry at how hot it must have been for that poor person inside that hot suit on top of the building. It was extremely hot for the appropriately dressed, so wearing the cow suit had to be miserable. The event raised almost $92,000 for Restoration House, which is a home for single-mother families.

Next I walked to the Market Square Farmers’ Market, which was surprisingly slow for a non-football Saturday. I met Urban Woman there, and we picked up food and coffee. This is one of the best times of the year for the market. A wide range of fruits and vegetables are in as summer and fall crops blend together. Maybe the heat kept people away.

One good thing I can say about the heat? Okra. Yes, that most perfect vegetable, which I love fried, boiled, or grilled. It needs hot weather to be happy and this is, I believe, the second most joyous September ever in East Tennessee for my friend the okra plant. I’m pretty partial to John Ledbetter’s okra from Hines Valley (organic) Farm. He always slips me a few extra when Urban Woman (who is sick of okra by this time of year) isn’t looking. Thanks, John!

Finally, I took a couple of turns at Oktoberfest in the Old City. The event was held in the shade (thankfully) of the James White Parkway overpass. Walking down from Gay Street, I took the colorful stairwell from the Gay Street viaduct for the first time since the Jackson Avenue ramps were closed. Signs all along the corridor at the bottom of the steps played the same refrain: The Old City is open for business. Please support them. The ramps will be closed for a year, and they need your support to get through what promises to be a difficult stretch.

I came and went from the festival, trading air-conditioning and football for the outdoor heat at intervals. Oktoberfest in the Old City appeared to be a success, with crowds building later in the day. German music, beer, and food were available and, despite the heat (did I mention heat in this article?), people seemed to have a good time.

You might wonder why there were so many events in one weekend, or perhaps why Oktoberfest would be scheduled for the last weekend in September. For your answer to all of the above, you might consult the UT football schedule. As much as East Tennesseans loves them some Vols, their schedule makes things difficult for event planners and brides. I’m not sure if funerals are planned around the open dates, but it wouldn’t come as much of a surprise.

The best news? Temperatures will drop by about 15° this weekend, putting our highs in line with what they should have been a month earlier. Pretty cool, huh? Or at least less hot. So, that’s it for weather, now for your local sports report . . .