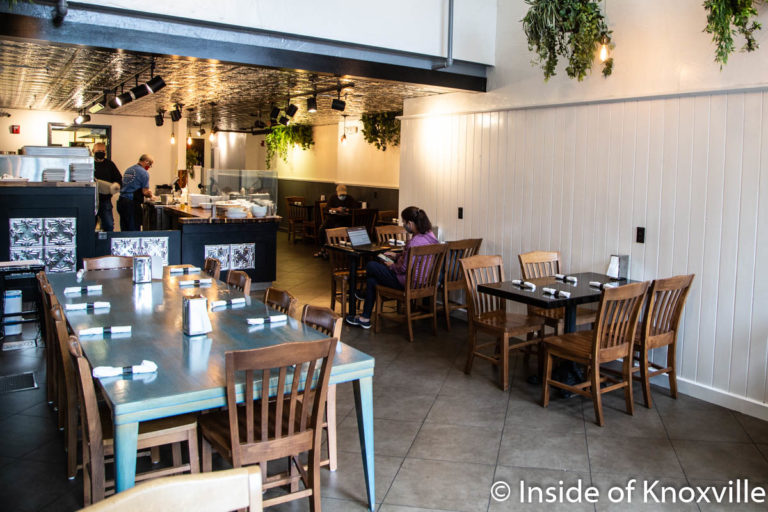 Kopita Meat, companion restaurant to Kopita (and two doors down) becomes the latest business to chart its course by opening during a pandemic. His Kopita vegan restaurant, serving middle-eastern dishes has been very well received and, when he saw an opportunity to expand the concept, just two doors down, he took the chance. Just a few weeks after announcing the plans, the business has opened for breakfast, lunch and dinner.

The new restaurant opened last week, and Avi said the customers who have tried it, have really enjoyed the food. The difficulty is that, other than larger crowds on the weekend, the streets are sparsely populated during the week. Many office workers have not returned, which impacts lunch business. Others continue to be unwilling to dine out.

The new place is simple, but warm, with plants and lots of wood and metal ceiling tiles as decoration. Pictures of Avi and Ilana on trips to Moroco and other favorite culinary destinations are displayed. Dishes and silverware await on the surfaces of tables as Middle Eastern music plays in the background.

The star, of course, is the food. Avi describes it as Middle Eastern, European and North African cuisine. The food is similar to Kopita but, as the name suggests, with meat. A special emphasis is placed on lamb, but you’ll also notice beef and chicken on the menu. Soft drinks and juice are available as is a small selection of craft beer, including Blackberry Farm, Yee Haw, Highland, Gypsy Cider and Truly Spiked Seltzer.

The menu is simple: pitas, plates, sides and dessert. I had a classic kebob pita which includes “juicy lamb and beef kebab, sumac onion, eggplant, white cabbage and tahina in a pita.” It is usually served with fries. The pita alone is a hearty meal and it is delicious. Avi describes some of the dishes, such as the chicken liver pita, “nostalgic,” and wants to offer comfort foods, such as soups.

You might try the shakshuka for breakfast: eggs (2 or 3) poached in a sauce of tomatoes, olive oil, peppers, onion, garlic and spices and the premium dish is slow roasted lamb shoulder served with a veggie salad, tahini, fries and a roll or pita. The bread is house-made and Avi strives to get fresh, local meat.

Dessert currently includes baklava and The Knafe (shredded pastry, soaked in a sweet syrup over a white cheese). He has plans to expand the menu generally and the desserts particularly as time allows. He’s currently hiring dishwashers, prep cooks and a sous chef.