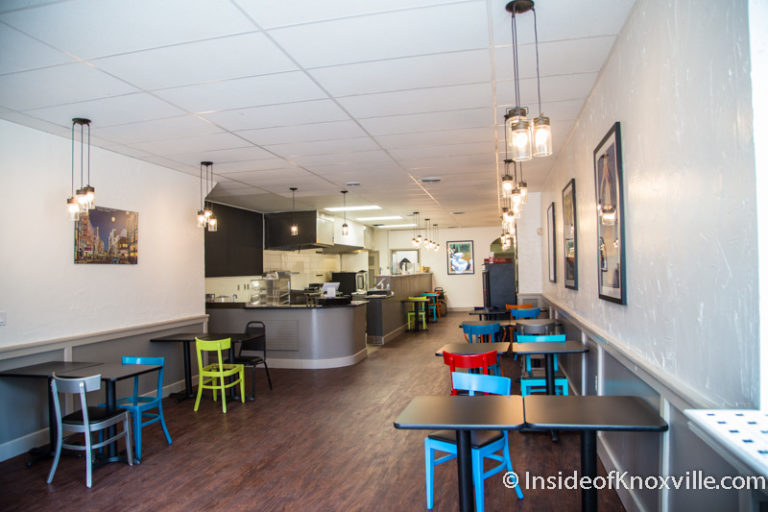 It seemed likely that there would be businesses which simply could not hang on during months of shutdowns, illness of employees and the discomfort many feel venturing out. Other variables also impact particular businesses in ways we might not expect. Some of the closures we’ll see in coming months were likely coming for other reasons. It doesn’t make them any less painful after a long run of downtown businesses opening in rapid succession.

We’ve already seen the announcement that Babalu would close, followed by the excellent news that they will reopen under new ownership. Next we saw the closure of Kybra Athletics. Now three additional businesses have made it clear they will not return. Two are restaurants, which most people are keenly aware is an area that has been hit particularly hard. The third is a service business that would not be immediately so obvious.

Frussies, which moved downtown in April 2015, has announced it will not reopen. The sandwich shop which served very fresh salads, soups and more, posted to its Facebook Page and Instagram, that it would cease operation at the brick and mortar location and hoped to re-emerge as a Food Truck. They are liquidating everything in the restaurant. Here’s the statement as posted to Facebook on June 18:

Well……tomorrow is Frussie Friday, and it will be the last one for a few months. Suffice it to say, the pandemic has been especially unkind to small business, especially restaurants!! Ours is no exception, unfortunately. Being in the “business district” of Gay Street was the perfect location for a lunch time deli. But with a majority of office and courthouse workers telecommuting now, we’ve seen a considerable drop in sales.

Further complicating things has been the 400% increase in the cost of beef and pork, items we use a lot of. Tomorrow we will be OPEN 11am-2pm for sandwiches and such. After that we will be closed as we vacate our current space. Keep your eyes peeled for a Frussies Deli & Provisions food truck coming to a road or neighborhood near you.

We will miss you guys and our little corner deli!!! Special thanks to my current staff and honorable mentions to those that came before them and helped me along the way. It’s truly been the work of many to pull this off every day, and I’m blessed to have known all of you!

I followed up with owner Jay Brandon to ask if he had anything to add. This is what he had to say:

It was a hard call to make, but I won’t be the last restaurant owner to make that call, unfortunately. With SO much of our business generated from downtown office workers looking for a quick and wholesome lunch, sales were down 80%. Combine that with inflated beef and pork prices due to covid shutdowns, and the timing of my lease expiring in May….it was a perfect storm of factors that were going to be insurmountable in the coming months and possibly year.

While we will miss the space on the 700 block, in the end the overhead is just too much to justify remaining open and taking on debt for the sake of to-go food. As you know, the Frussies space is a long and narrow building with an open kitchen concept. And myself and my crew working underneath commercial hood vents would be exposed to any air particles from patrons.

We are making a shift to a mobile unit so that we can keep providing Knoxville with fresh made bread and house cured meats. Certainly a change from the business model that has always worked for us, but I believe the future is in outdoor socially distanced food parks and neighborhood dinners/delivery.

So, you can look for Frussies out and about. It underscores variables those of us not in the industry might not have appreciated: Increased costs in food and working from home as a long-term issue for downtown businesses reliant on the workers. On that last issue, it is one being discussed from New York City downward. Workers who are home are less likely to go out for lunch.

I also got a call from Rosie at Viet Bread and Tea. Rosie opened the restaurant just a year before the pandemic struck and never really had the time to get her feet under her and get established. I had my first pho there (I know, I was late to the party) and Urban Girl was crazy about the place. The spring roll there was amazing and one of my go-to lunches when I needed something quick to kill my hunger on the way to the next stop.

Rosie had initially hoped she might sell the restaurant, but that ran into complications. She’d hoped to introduce me to the new owner. I spoke to her again and that seemed less likely, though there may still be hope. She simply said that a combination of personal issues in her family and the shut-down due to the pandemic was too much for her to carry forward.

Finally, very long term downtown business, Prestige Cleaners will not reopen their downtown location. This hits particularly hard to me because the business had been in that building for sixteen years, once also operating a coffee shop on Gay Street. It also hurts because this is a service for downtown that we’ll no longer have in brick-and-mortar form.

I spoke to owner Eddie Mannis who at one time owned two floors of the building, but eventually sold to Ron Sherrill. Eddie operates not only dry cleaners, but tuxedo rentals across the city. Each end of the business has been hit for reasons those of us not in the industry might not consider.

He said that the tuxedo business brings in 70% of its profits between March 15 and May 15 due primarily to rentals for proms. Proms largely didn’t happen this year and, while he said they’ve had a little business from the unofficial proms that have sprung up, it has really been very little. With that side of the income reduced dramatically, those stores are operating limited hours and by appointment only. They are taking the random small weddings, but mostly are hanging on until the 2021 prom season when they hope to recover.

As for the dry cleaning portion of the business, he pointed out that with employees working from home, the need to have clothes dry cleaned has been severely reduced. He also feels strongly that as employers become accustomed to their employees working from home, they will not return to the pre-pandemic mode of operation. He thinks corporate foot-prints will diminish and it will impact, among other things, the need to have clothes drycleaned.

With all of the above considerations, and the more general struggle of his businesses during this time, he began to look at the bottom line of all his stores and felt this was the appropriate course. If you, like me, used Prestige Cleaners’ downtown location, Eddie hopes you’ll now use the pickup and delivery option which is a free service. You will find a link, in red, at the top of the Prestige Cleaners website to set up the system and they will come to your door.

So, there are very particular reasons that led to each of these closures, from the price of food, to personal family issues and to the current absence of downtown office workers, as they work from home. We will most certainly see more closures as the pandemic and its fallout continues. Support the businesses you can support and help them hang on as we work our way through this difficult time.