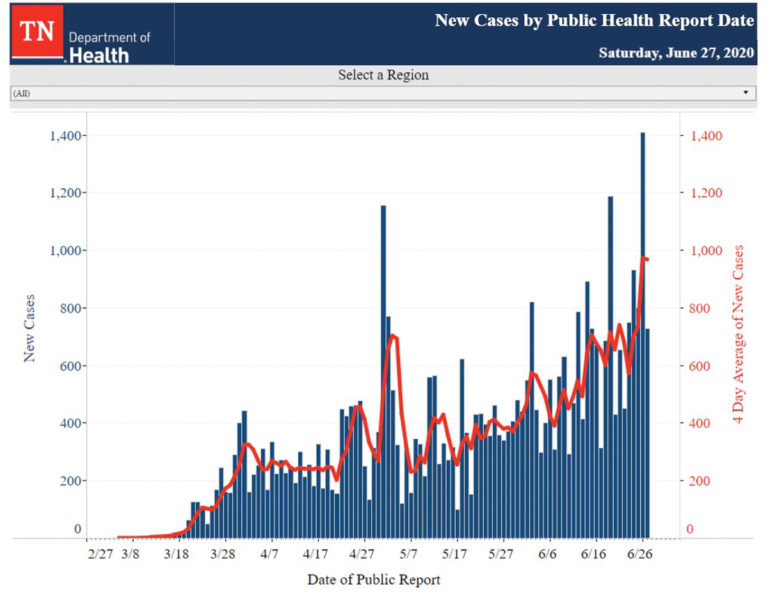 I hope you had a good and safe weekend. As we enter another week, there are a number of interesting story lines from the weekend. Let’s take a look.

There are currently 10,296,143 confirmed cases of COVID-19 since the beginning of the pandemic. 505,478 deaths have been attributed to the illness. As the pace of the diagnosed daily cases has escalated recently, the number of days required to reach the next million has, of course, dropped. The tenth million was added in just five days, the shortest period since the first million took about 2 1/2 months.

Friday saw the single highest worldwide one-day surge since the pandemic began, with 194,190 new cases. It broke a one-week old record of 182,209 cases. Yesterday, there were 163,172 new cases reported and 3,454 additional deaths.

Worldwide deaths seem to have leveled off, perhaps with a slight rise. On average, there are just over 4,600 deaths reported each day. If deaths are going to follow the pattern of sharp increase seen in cases, it should happen right away. If not, perhaps treatment has gotten better, the most vulnerable populations are being protected better, or more of the new cases being reported are among healthier, younger people. Likely all of the above.

The Americas, the Middle East and Southest Asia continue to be the drivers in the pandemic. The countries at the top are contributing disproportionately to the spread, with the top three countries contributing well over half of the new cases yesterday: the U.S. (40,540), Brazil (29,313) and India (19,620).  It is very likely the numbers in both Brazil and India are much higher, as their testing programs continue to lag ours and much of the world by wide margins. The three countries were joined by Mexico to top the number of deaths in the world for yesterday.

It is important to note, these are not the only countries in trouble. There were twenty-two different countries recording at least 1,000 new cases yesterday. Outside of the geographic regions mentioned earlier, South Africa stands out as having an alarming rate of increase, adding 6,334 new cases yesterday to what have been relatively low numbers.

China continues to impose new lockdowns. The pandemic may be starting to gather strength as has been feared in Africa. Central and South America are now considered “intense zones” for transmission of COVID-19.

As noted above, the U.S. continues to lead the world in total and newly diagnosed cases of COVID-19. Whereas the U.S. represents a bit over 4% of the world’s population, it represents over a quarter of both cases and deaths reported across the world. There are currently 2,648,487 confirmed cases and 128,503 deaths in the country.

On Friday the U.S. set a new single-day record with over 47,000 new cases. This broke the old record set one day earlier. Yesterday there were 40,540 new cases, though there were actually more (additional info on that under the “state” news below) and 285 additional deaths were reported. Deaths continue to drop and yesterday’s total was the second lowest day since March.

Perhaps the most discouraging news from the weekend came in the form of an interview with Dr. Fauci who said he fears even a vaccine will not give the U.S. the herd immunity required to resume activity as normal. This because he feels the vaccine will likely have a 75% effectiveness rate and over 30% of Americans say they will not take the vaccine. The combination is not enough to protect us. Vice President Pence does seem to now be encouraging the use of masks and is now sometimes seen wearing one. President Trump continues to decline to do so.

Americans continue to be divided over not only wearing masks, but whether the disease posts a serious threat. Some are now arguing that high case rates don’t matter as long as hospitals are not overwhelmed and the death rate remains low. The difficulty of opening up an economy with about 1.3 million people ill and quarantined is now becoming apparent to many businesses.

We have to start with the data issues that prompted the state of Tennessee yesterday to not to report any of the daily information to which we’ve become accustomed. The state reported an “unplanned shutdown” of data systems due to “an overload of lab results.” To this point, it does not seem to be impacting numbers reported locally for Knox County, as they use a separate system, though one set of data (testing) It does, however, impact national numbers when Tennessee does not report.

What we do know is that, at least as reported, Tennessee added 5,726 new cases last week for a one week record, surpassing the record set the previous week of 4,907 by almost 20%. All data, including that in the graph above stops on Saturday due to the outage. The state set a single-day record of 1,410 new cases on Friday, about 20% higher than the record set a week earlier.

The testing data maintained by Johns Hopkins University stopped with the end of data flow from the state, but I felt the above graph, while not including the last two days’ numbers was important. As testing continues at about the same pace, with perhaps some increase (we need seven-day moving averages), the rate of positive tests for the virus continue to rise to concerning levels. With a target of 5% or below in positive tests, the state is showing a 8.1% positive return, meaning the increases are not a result of increased testing.

Both Nashville and Memphis have now joined a number of cities across the nation in requiring the use of masks in public. The Nashville order took effect today. Memphis started their requirement last week. Governor Lee is watchful but not overly concerned about increases in the state while pleased with our economic recovery.

Locally, Knox County also had its largest single-week increase last week, with 202 new cases reported. This is about 117% higher than the previous record set two weeks earlier and reflects about a 140% week-over-week increase.

53 new cases were reported today, for a new record. It surpasses the record set just four days earlier by 39% and brings the total cases since the beginning of the pandemic to 912. There are 265 active cases in the county, of which 15 are currently hospitalized. As a week-over-week comparison, one week ago today there were 135 active cases and 4 hospitalized patients, essentially doubling the active cases in one week and quadrupling the number of hospitalizations, though the numbers started low and are, therefore, more easily increased by dramatic percentages.

No additional deaths have been reported and there are currently 29 probable cases. Almost 45% of all cases now fall into the 20 – 40 age range.

Dr. Buchanan started today’s briefing by thanking which are following guidelines. Testing for this week from 8 – 2 Monday through Thursday. She said the high volume is producing waits and that results may now take 5 – 7 days. She re-iterated that people with a positive diagnosis should not report to work, contradicting what she said last week. She said if a person has been exposed, but not tested positive, they should only work and otherwise stay at home. She apologized for the confusion.

She addressed the confusion at the state level and said it may have impacted the low number from yesterday and the higher number today. She confirmed the above numbers. Noting that new cases have increased over 100 over the last several days and active cases have increased substantially, she asked that people please maintain the behaviors requested over the holiday weekend.