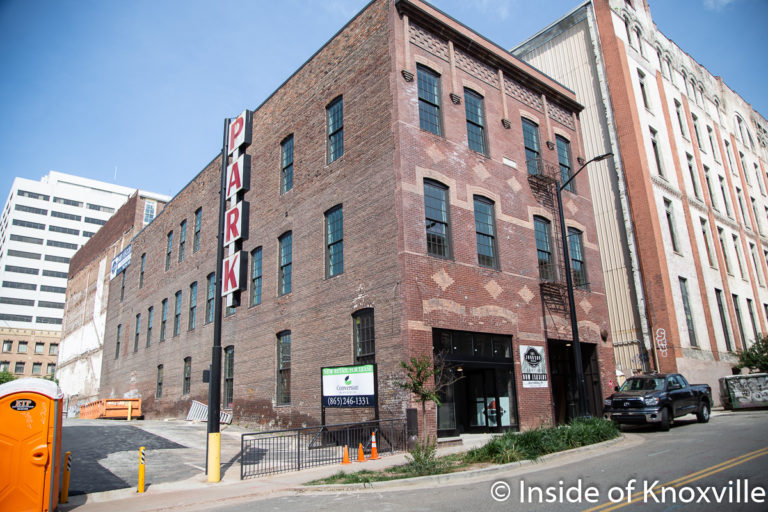 The journey for the Cal Johnson Building has been a long one, with surprising twists and turns along the way. Noted by Knox Heritage as a part of its Fragile Fifteen for years, the building has finally found new life, opening this week with eight urban apartments sitting over a commercial space for an as-yet-determined business. The units are available starting Wednesday and seven of the eight are already spoken for.

According to a written record compiled by Jack Neely and Paul James of the Knoxville History Project, the building, dating to 1898, was constructed by Cal Johnson. Born into slavery just a couple of blocks to the south of this building around the current location of the Hyatt Place Hotel, he started his life as property of the McClung family, but died a free and very wealthy man in  his small home directly adjacent to the Cal Johnson Building. The building is one of the last he constructed and the only one he owned which still remains.

After being freed, Cal and his brother Jack got work exhuming soldiers from the battlefield and delivering them to the new Federal Cemetery just off Broadway. They saved and reinvested the money, purchasing a wide range of property along State Street and elsewhere. Cal established saloons around the city and built two race tracks, and in the process likely became Knoxville’s first black millionaire.

The Cal Johnson Building, which bears his name in an original marble inset on its facade, was home to numerous businesses in its early years. It was the home of Knoxville’s first auto company, which later evolved into Rodgers Cadillac and also to a later car company which would evolved into Reeder Chevrolet. In between, it hosted a number of clothing manufacturers who would grow their businesses in larger facilities after leaving the building. It would eventually become a warehouse for Bacon and Company under the ownership of Jack Dance, Sr. and, currently, Jed Dance and his son Jack Dance.

The push to redevelop the building began several years ago with concern regarding its condition and the city and the family at odds over the best course to proceed. Joe Petre and Daniel Oldle with Conversion Properties began working with the family and a plan was approved to convert the building into eight apartments and a first floor commercial space.

After a plan was approved by all parties, the complex financing work began. The building has benefited from Historic Tax Credits, a grant from the CBID, Private Equity from the family, Bank Loans and a $150,000 Historic Preservation Grant from the City of Knoxville. The city also awarded a PILOT to the project. With the complicated and numerous sources of funding came strict guidance on how the building could be renovated.

Joe Petre, Daniel Odle and Robert Finley of Conversion Properties along with Jed and Jack Dance gave me a tour of the nearly completed building. Joe said there was some water damage in one corner of the building, but otherwise, the roof was intact and the structure was mostly sound. The exterior bricks on the top floor had to be removed and re-laid as the mortar had disintegrated. They had to be meticulously placed back onto the building with the same side facing outward, as a requirement of the National Park Service whose regulations are in place when a project uses historic tax credits.

Additionally, while the building was sound and held up by its original beams, which still remain, the structure did not meet current codes as a free-standing building and additional interior steel structural frame had to be put in place. True to an industrial design, the beautiful wooden beams, as well as the new metal structure and duct work are all visible throughout the building.

Joe said work moved along well even after office staff began working from home. Now all that remains are details like a large wrap featuring a photograph of Cal Johnson, which will be placed on the wall in the residential lobby beside the newly install elevator. It’s one of a number of details paying homage to the man and the building.

From major features such as the stairwell in the penthouse suite being fashioned from wood in the building to a bottle of Cal Johnson Rum given to each new resident, the story is ever present. Most prominently, the units were each given names related to the story, from the McClung Home where he was born, his Lone Tree Saloon, his racetrack at Speedway Circle and others. The penthouse itself is named after the man, himself.

The photos included here are from various units, with those from the three-bedroom, three bath penthouse labeled as such. The apartments feature 13 to 16 foot ceilings, lots of exposed brick, sliding barn doors and upscale kitchen and bathroom finishes. The penthouse features two levels of interior space with a main and mezzanine level and a stairwell reaching a private rooftop patio with great views of the city. Seven of the units are taken and Jack Dance said there is a waiting list should any of the one-bedroom units come open in the future.

Strong interest has been expressed in the commercial space, which is just over 4,000 square feet. It is wired and has duct work  for a commercial kitchen. It also has a grease trap. The likelihood is it will become a restaurant and/or bar, though no lease has been signed at this time. There would be some allowance for customized build-out of the space to suit a tenant.