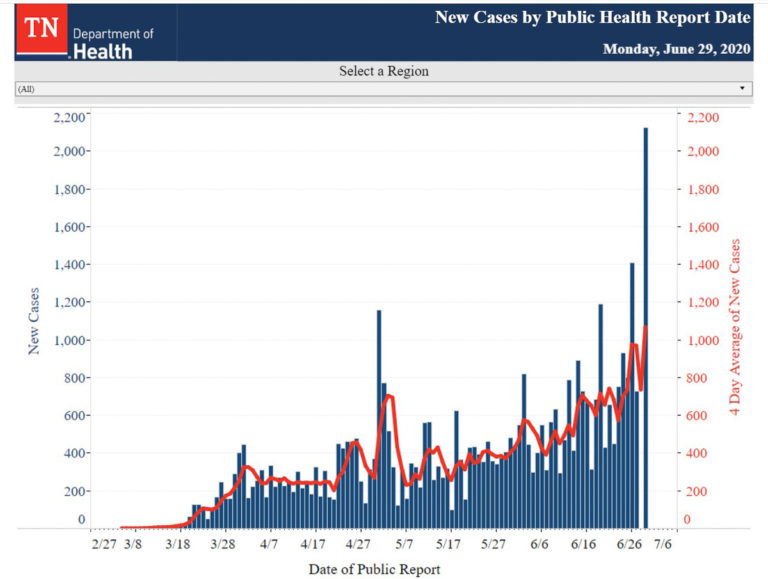 As the pandemic continues and the crisis manifests itself in different ways, please remember to be kind to others. Many of us now do know people who have or have had the virus. Many of us have lost income from being sick or having our businesses closed. Some people have lost even more. As you rail against leaders you feel could have done better or against an illness that has caused so much turmoil, please remember to be kind to your neighbors. No one likes this. We may believe differently, but we all want the same things. Your kindness could make a difference for someone in a way you can’t imagine.

As of this writing, there are a total of 10,449,330 confirmed and acknowledged cases of COVID-19 worldwide since the beginning of the pandemic. 509,113 deaths have been attributed to the disease. Over 5.7 million people have recovered and just over 4.2 million cases remain active. Yesterday there were 160,985 new cases reported and 3,415 additional deaths.

This marks seven consecutive days of more than 160,000 new cases across the world, a number that had only been reached once before, and that the previous week. Deaths over the last week averaged 4,562 per day, down slightly from a week earlier, but continuing a gradual slope upward since falling to an average of just over 4,000 a month ago.

New cases continue to be concentrated in the same regions of the world, the Americas, the Middle East and Southeastern Asia. The top three countries continue to diagnose over half of the daily cases: The U.S. (44,734), Brazil (25,234) and India (18,339). That said, there were 20 different countries with 1,000 or more new cases for the day.

South Africa continues to have one of the highest increases by percentage, adding over 6,000 to their daily total. The Philippines may be worth watching. It finished just out of the top group, but is seeing an increasing rate of new cases. No European countries were in the top group yesterday.

The European Union went through with the move that had been expected for a few days and banned travel from the U.S. The move also included travel from Brazil and Russia. It opened travel from the rest of the world for the first time in months. While death rates across the world have dropped, the BBC graphs how they continue to increase in certain countries. While the countries with rising death rates might not contain surprises to those who have been closely following, several countries with second peaks in cases does contain a few. In addition to the U.S., Israel, Iran and Algeria are all experiencing second peaks.

2,684,266 Americans have been diagnosed with COVID-19 since the beginning of the pandemic and 128,857 deaths have been attributed to the illness. Yesterday, the country added 44,724 new cases and 346 deaths. The country leads the world in total number of cases and deaths and continues to lead most days in new cases. It has fallen behind India and Brazil and sometimes Mexico in new deaths.

The best news for the country has been that deaths in the U.S. have continued a gentle slope downward. The current seven-day moving average sits at 593 deaths per day. That is the lowest it has been since March 30, exactly three months ago today. It’s the most hopeful sign that we may be able to determine a balance between public safety and maintaining an operable economy.

Health officials will testify before congress today, focusing on returning to school and work. The hearings started today with Tennessee Senator Lamar Alexander calling on President Trump to occasionally wear a mask so that his supporters might follow his example. Jacksonville, Florida became one of the latest cities to require masks.

Bars are increasingly being identified as major spreading points for the virus. One bar in East Lansing, Michigan is linked to over 100 new cases, for example. California has called them a hot spot, Arizona’s governor has shut them down for a second time, and over 100 cases were connected to a bar district outside the LSU campus in Baton Rouge, Louisiana. In Texas, where Governor Abbot was among the most aggressive governors re-opening his state, he has now ordered that bars be closed for a second time and, as a result, he has been hit by a law suit from a group of bar owners saying they have been unfairly targeted. The governor has acknowledged reopening bars too quickly.

The Paycheck Protection Program ends tomorrow with $130,000,000,000 of unused money. Only two states in the U.S., Connecticut and Rhode Island, are showing decline numbers of new cases of COVID-19.

After a day of a broken reporting system, the state of Tennessee reports a total of 42,297 cases of COVID-19 since the beginning of the pandemic and a total of 592 deaths. The numbers for yesterday, as a result of the system issues, include a two day total and are therefore difficult to compare. The two-day numbers reported yesterday were 2,125 new cases, 8 new deaths and 35 new hospitalizations. It is worth noting that the number of new cases represents the biggest two day total since the beginning of the pandemic.

There are 14,743 active cases in the state, which includes an increase of just over 1,200 from the number two days earlier. Over the two day period, the state reports just under 29,000 new tests were administered, bringing the testing total to about 777,000 since the beginning of the testing program.

A concern is the continued rise in positive test results, a number that should be trailing downward if we are testing adequately. With the new two day data set included, the rate of positive tests rose to 8.7%. Epidemiologists suggest it should be below 5%. This is a clear indicator of community spread.

In other state news, yesterday Governor Lee extended the State of Emergency through August 29. This is important locally, as we are set to join the state plan tomorrow. He issued two other executive orders continuing to allow for digital governmental meetings and for digital notarization of documents. You can see the three orders here. Hamilton County continues to consider requiring masks and Chattanooga Mayor Berke says he would have already required it in the city had the state given him any power to manage the crisis.

Locally, the numbers are somewhat better today. It is unclear whether the state’s data glitch impacted the daily numbers presented here. After yesterday’s spike to the highest number reported, at 53, today the health department reported 15 new cases. There are currently 234 active cases and 14 people hospitalized. There are no additional deaths and 29 probable cases.

The percentage of young people continues to grow across the county, with 26% of all cases now among people in their twenties. 31% of cases are among our Hispanic population. Mayor Kincannon announced yesterday that, starting Wednesday, masks will be required for anyone entering city government buildings will be required to wear a mask.