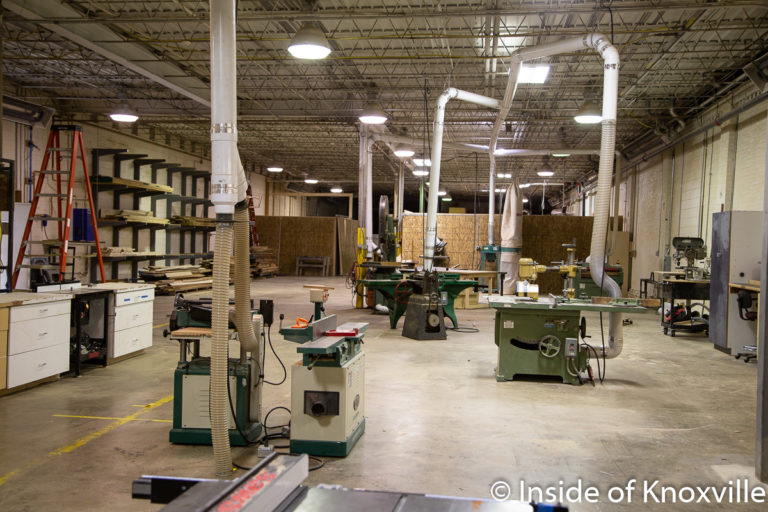 For Spencer Ratliff, necessity met opportunity in a strange season. While many businesses are facing daunting challenges, he’s taken his growing business and shaped a new venture at 203 West Jackson Avenue at the western end of the Jackson Terminal Building. Able Trade has opened for business and they are hosting an open house this Friday night.

Spencer, originally from Knoxville, graduated from Farragut High School and attended UT, but decided college wasn’t for him. He describes his next years as wandering in the wilderness, or at least living in it. He lived in the mountains for a couple of years before spending a couple of others in Africa.

When he returned to Knoxville, he married and took up wood working. His father is a commercial contractor and had the equipment, which is where Spencer got his start. He had a job at the airport working for a company that announced it would cease operation. His wife encouraged him to give woodworking a go as a career. He says he spent years trying to figure out how to market his work. Most of his work currently is with Black Berry Mountain.

He started his Old North Designs woodworking company ten years ago in a basement shop. As the business grew, he moved to his father’s barn and, later to a building on Cherry Street. It was there, sharing the building with other wood and metal workers that he came up with the vision of having a shared space designed for the kind of work they were all pursuing. He looked  for a building that would work and really didn’t consider downtown, which he assumed would be too expensive.

Then the landlord announced the building would no longer be available after the end of the current lease. He had to get out and, on a hope, contacted his friend Eric Ohlgren who operated Heuristic Workshops at 203 West Jackson. That business closed and the building was available. It had been a woodworking shop, so the space was perfect and a deal was struck. Able Trade was born.

Spencer describes himself as “a fan of communal working” and “not a big fan of going it alone.” He says that just makes things harder. Over the years in making small talk with people he found a lot of interest in wood and metal working, but it is a hard interest to pursue. The learning curve is steep if you are doing it alone. The price of tools and equipment makes for a pricey entry point.

“I thought it would be cool just to have a place for people to try it out. It is hard to get a good client base. A lot of us want to stay small, but make a profit. This helps ease the burden of some of the expense with starting a new business.” He also feels it helps to be around other people doing similar work. It’s easier to pick up skills from others, as well as a better understanding of operating a business.

The new business offers different plans to suit the needs of anyone who might be interested. A basic membership allows use of the equipment during day time hours. Others may want a dedicated space and they may use the space whenever they like. There is currently space for seven businesses. Five are filled and the others will be soon. Spencer has plans to expand to as many as twenty additional spaces.

Whereas the building on Cherry Street had 3,000 square feet, the new facility has 16,000 square feet, as it was previously a wood working shop, it had a perfect layout. For members, there is a kitchen, a machine shop, a wood shop, a photography studio, a conference room and space for storage. The machines include an array of top-of-the-line saws, planers, routers, lathes and more.

If you are interested in learning more about memberships, you can find details on the Able Trade website. You can also follow the new company on Instagram. All skill levels and hobbyists are welcome. Spencer wants to help skilled artisans build a business. Join them for their open house from 5:00 pm to 7:00 pm. I’ll leave you with Spencer’s Top Five Reasons to Come to the Able Trade Open House: