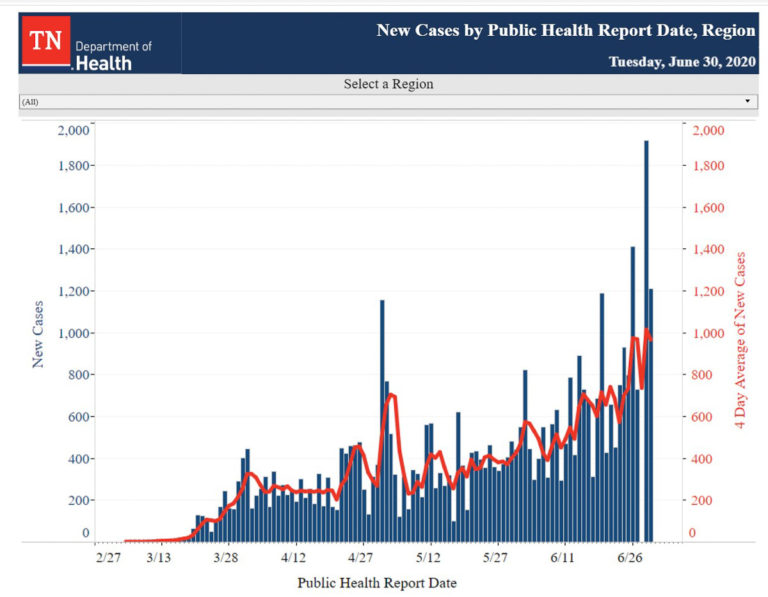 It’s Wednesday. It’s July. Time keeps moving along. It’s hard for me to grasp that this state of semi-weirdness is entering its fourth month. One consensus that is growing is that wearing masks when in groups would help us get back toward the semi-normal side of all this more quickly. Wearing a mask seems to be a bridge too far for some of us. It isn’t really a major ask. Our generation hasn’t been asked to storm the beaches of Normandy, just to cover our faces. If we don’t do it more widely, semi-weirdness will just roll on and on and on. I hate masks and I wear them. I hope you will, too.

As of this writing there have been 10,631,689 cases of COVID-19 diagnosed since the beginning of the pandemic. 515,021 deaths have been attributed to the illness worldwide. There are currently about 4.3 million active cases around the world. Yesterday, 174,264 new cases were added and an additional 5,072 deaths were reported.

New cases continue to increase at a fairly steep rate, with an average of just over 175,000 new cases confirmed each day. This is likely the result of increased spread, as well as increased testing. Some parts of the world are just now being tested with any serious depth. Deaths, at the same time, have plateaued for about the last four weeks. The average number of daily deaths now sits at just over 4,500.

Most of the recent trends remain steady. The U.S. (46,042), Brazil (37,977) and India (18,256) contributed well over half of the world’s new cases. This is the case even as Brazil and India have not approached comprehensive testing programs, meaning their numbers are necessarily much higher. Brazil reported the most deaths at 1,271, followed by the U.S. and India.

Twenty different countries reported at least 1,000 new cases yesterday. The regions of the world most adversely impacted continue to be the Americas (7), the Middle East (6) and Southeast Asia (4). The country which continues to have the most rapid rate of reported spread, however, is South Africa, which is adding near 5% daily to its totals. No European countries were in the top twenty countries for numerical increase for the day.

The U.S. has purchased 90% of the world stock of remdesivir for at least the next three months, which has displeased other countries who have expressed concern that a similar move could happen with a vaccine. The U.N. estimates world tourism losses will be about $3.3 trillion, with the U.S. suffering the biggest loses. Australia, which has taken an aggressive, central government shut down an additional 36 suburbs in reaction to 73 new cases, knocking on doors and sending postcards to all impacted residences.

As of this writing, there have been 2,737,609 cases of COVID-19 diagnosed in the U.S. since the beginning of the pandemic and 130,284 deaths have been attributed to the disease. Yesterday there were 46,042 new cases reported and 764 deaths across the country. There are currently over 1.4 million active cases in the U.S.

As new cases continue an increasingly sharp trajectory, deaths, after a sharp decline are now decline more slowly. Over the last seven days, the U.S has averaged 584 deaths each day, the lowest that number has been since March 30.

Out of concern regarding the holiday weekend’s potential to be a major spreading event many locations are urging residents to celebrate at home. South Florida has closed beaches for the weekend, along with others, such as California. New York City, which was set to open restaurants to indoor dining on Monday, has announced they will delay that until further notice. Two companies have announced encouraging vaccine news. The Senate has voted to extend the deadline for applying for PPP funds.

The state of Tennessee reported 1,212 new cases of COVID-19 yesterday, to bring the pandemic total to 43,509. There were 12 deaths reported yesterday, bringing that total up to 604 and 637 people were reported to have recovered, giving a net increase in active cases for the day of 563 cases statewide. There are now 15,306 active cases in the state.

Worldometers has now included state specific information for Tennessee, which includes a graph detailing death trends. I’ve included it today and will keep doing so, if it seems useful to people, though I may not have it every day. There’s a limit to how many graphs I can handle each day and, I think, a limit to how many are useful before they start blending together. The seven day average has moved up pretty steadily in Tennessee since late May, but is no higher than it was in early April or Mid May. It does stand in contrast to the national trend, though the numbers have been so small, it’s hard to read too much into that.

Data from testing in Tennessee has suffered a number of glitches, making the graphs less than perfect, but the above chart from Johns Hopkins shows that Tennessee continues to test at a relatively high rate. There is some small encouragement from yesterday to today in that the rate of positive tests dropped from 8.7% to 8.2%. This leaves us far above the mark of 5% that is considered the line between acceptable and not.

Locally, Knox County reported 50 new cases today, marking the second time we’ve hit 50 or higher for a day. It is only the second time we’ve been over 40, as well. Both days are this week. Our new total of cases since the beginning of the pandemic is 977. The number of active cases sits at 271. For reference, one week ago, we had 136. Two weeks ago, the number was 104.

There are currently 13 hospitalized Knox County Covid-19 patients, there have been no further deaths and there are 29 probable cases. Benchmarks were updated today and data reflects increases in numbers of hospitalized patients, as well as those in ICU and on ventilators. The hospital data is regional and includes 19 hospitals in the immediate area. Patients are often hospitalized outside their county of residence.

There is a Board of Health meeting schedule for 5:00 pm today and it is in-person and open to the public on a limited basis, though they are requesting that people watch it remotely as space, due to distancing will be limited. It will be available on Community Television which you can also watch via computer. There will be no Health Department briefing on Friday due to the holiday.

Charity Menefee chaired the meeting thanking those who would maintain safe practices as they celebrate this weekend. She confirmed the above data and then looked at the benchmarks, which are now updated on Wednesdays due to the Board of Health Meeting scheduled for that day.

Regarding the benchmark related to new cases, she says there have been several days of alarming increases in cases and this traffic light will remain red. She pleaded with the public to follow guidance. Regarding testing, they examine number of tests given and time of return. She said there were red flags regarding tests, though over all it is ok. Lab result time has stabilized. They moved that light to yellow from red last week.

The third benchmark measures the effectiveness of contact tracing. It remains in good shape, but they are bringing in others to help. There are 70 people working on that at least part time. The fourth benchmark regarding hospital resources regionally. They feel they continue to be in good shape in this regard and the light remains green, though positive patients, ICU and ventilator each increased during the time period. The numbers are trending upward. The fifth benchmark reflecting deaths remains green as there have been no new deaths.