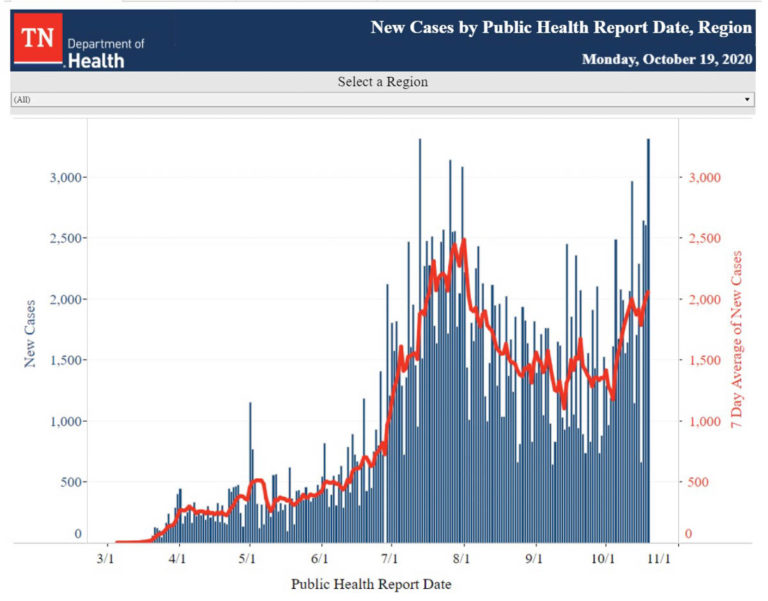 Welcome to another beautiful day. We enjoyed a gorgeous sunrise this morning, the sun shimmering through the fog over the Tennessee River as the mountains loomed in the distance. The fog moved into the city, encircling us. It was easy to imagine for a few minutes that all was well in the small cocoon it formed. It’s important to have some of those moments. I hope you find yours.

The state of Tennessee reported 3,317 new cases of COVID-19, yesterday, setting a new single-day high since the beginning of the pandemic. Reported testing, as you might expect, also surged. Total counts now include 220,566 confirmed cases, 11,495 probable cases. 205,832 people have recovered and 11,812 Tennesseans remain ill.

The state reported 13 additional deaths, bringing the total to 2,922 who have died in the state from COVID-19. The seven-day average for cases is 2,055 per day, the highest it has been since August 2. Yesterday’s case number ranked fourth in the country for the day. The average number of daily deaths in the state is now 22.

41 COVID-positive Tennesseans were admitted to the hospital, yesterday, bringing the pandemic total to 9,618 hospitalizations. After a single day drop, the hospital census resumed its climb to its highest recent point, with 1,259 hospitalized, 377 of these in ICUs, and 173 on ventilators. Hospitals are now operating at 83% capacity for rooms, 88% capacity for ICU beds, and 31% capacity for ventilators.

The number of reported tests surged in the state, yesterday, to over 42,000, the fifth highest daily total since the beginning of the pandemic which, to some degree, explains the higher daily number. Even with the larger pool of tests, however, the state reported an increase in positive test result rates to 8.31%. Johns Hopkins is reporting an 8.4% average rate over the last seven days.

The Knox County Health Department reported 143 new cases today, likely reflecting in part the increase testing reported yesterday by the state. It marks the third consecutive day over 100 cases and is the second highest daily total for the month to this point. Totals for cases in the county have now reached 11,857 confirmed cases, 561 probable cases and 10,952 recovered.

The numbers of concern for the county include 1,371 active cases, easily the highest that number has been since the most recent adjustment of the calculation for the number. Also of concern, Knox County resident, COVID-positive hospitalizations increased to 68 and have remained near the largest number reported for the last week. The current high mark for a single day was 70, set a week ago today.

For the second consecutive day, no additional deaths were reported.

Also in the local news, in their work session yesterday the Knox County Commission took up two resolutions impacting the Board of Health. One would require the body to meet in person and to  have an unlimited public forum each time. That resolution moved forward to a possible vote next week, with the in-person meeting requirement removed.

The second proposed formation of advisory committee on health and well-being. Commissioner Larson questioned whether making government larger was the best path forward, while Dr. Buchanan delivered a statement saying she felt it would duplicate the function of the Board of Health and noted she had not been contacted by a number of Commission members for any advice and she would welcome that.

The topic of dissolving the Board of Health was also discussed and seemed to have some support. The representative from the law office noted that this would mean that control of the Knox County response to the pandemic would revert to Dr. Buchanan, from whom it was removed by an opinion from the same law office.

Dr. Buchanan led today’s briefing, expressing gratitude to those engaged in health education. She reported the above numbers and said hospitalizations were a concern. She reminded everyone that regional numbers are critical and that those will be reported tomorrow. She asked that everyone continue following the core actions and get a flu shot.

The University is reporting 40 active cases, including 36 students and 4 employees. There were ten new cases reported this morning. Isolation/quarantine numbers remain low relative to previous highs at 286. Of these, 28 are employees, 77 are on-campus students and 181 are off-campus students. No additional clusters were reported.

The Knox County School System returned to reporting after fall break and the initial report noted 69 active cases, including 49 students and 20 staff members. It marks a significant increase in the number of currently positive students, as 33 were reported before break. The number of ill staff remained the same.

423 students and staff have recovered, while 518 are in isolation or quarantine. Of the 518, 452 are students and 66 are staff. This reflects a significant drop from the 815 in quarantine or isolation going into the break. Metrics for student and faculty attendance, plus cafeteria and bus staff attendance are reported as green, while custodial staff is reported as yellow and substitute availability remains red, as it has since the beginning of the year.

All schools are currently open to in-person learning.