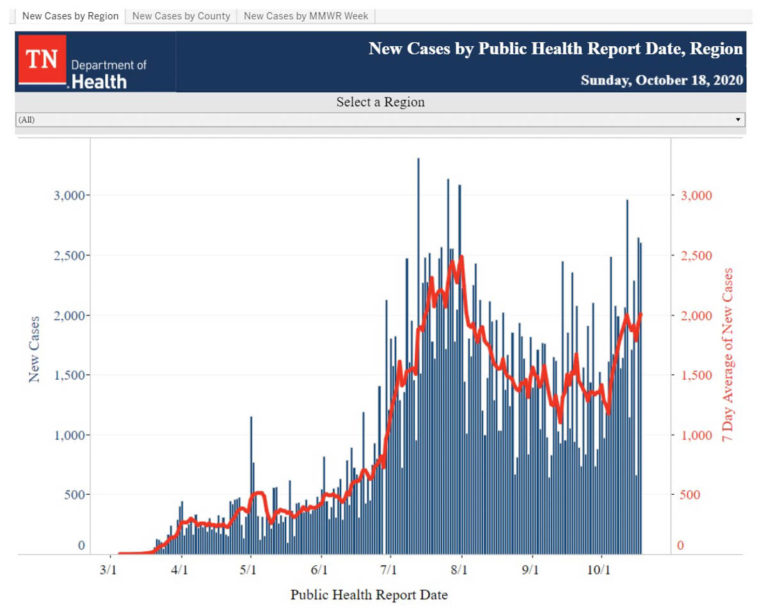 Welcome to a new week. I hope you all had a restful weekend and got outside to enjoy the cooler air. The leaves are starting to change and one of our area’s most beautiful times of year is looming. Be sure to really see it! We had our weekly family movie night during which Urban Boy (5), thankfully, spared us Frozen 2 for the millionth time and shifted to Tim Burton’s “The Nightmare Before Christmas,” which I had never seen (I know, I know). That was followed by the final two Harry Potter movies, chosen by Urban Girl (11). Not terrible and it was a cozy time for all.

Close to 40.4 million people across the world have been diagnosed with COVID-19. Of these, over 1.1 million have died of the illness, close to 30.2 million have recovered and about 9.1 million remain ill. In the last week, roughly 2.6 million people have been diagnosed with the illness and almost 37,000 people have died. Last week, those numbers were 2.3 million and 40,000.

Countries leading in deaths continue to be familiar, though it is worth noting that after a long and horrible outbreak, Brazil is experiencing a drop in cases and deaths. France has rejoined the top ten in deaths, while Russia is experiencing a massive resurgence of cases and deaths. The top five countries in deaths in the world yesterday were India (578), the U.S. (448), Mexico (355), Iran (252), and Brazil (215).

The spread is not only deep, it is very wide. In previous weeks, the number of countries reporting at least 1,000 new cases, has risen each week, from 28 five weeks ago, to 41, yesterday. Perhaps due to seasonal shifts, the countries north of the equator are now seeing the increases. Of the 41, 16 are European, 15 are Asian (includes the middle east), 5 are in South America, while only 2 are in Africa.

New lockdowns are being imposed across Europe as cases surge and deaths begin to rise. The Chinese economy is surging as the country reports the virus is under control there. A top Palestinian official has the illness and is on a ventilator. The Czech Republic currently leads the world in per capita case growth.

Just under 8.4 million Americans have been diagnosed with COVID-19, an increase of about 400,000 in one week. Almost 5.5 million have recovered and just over 2.7 million people remain ill. 224,757 Americans have died of the illness, including 5,031 in the last week. Cases are increasing, while deaths have continued an extremely slow decline.

The U.S. continues to lead the world in total cases and, with the new surge, looks to keep that unfortunate ranking. New cases are now averaging 56,322 per day, up from 50,014 a week ago. Friday’s total of 71,689 new cases was the highest daily total since July 31 and is the eighth highest daily increase of the pandemic. The U.S. remains 8th in cases per capita in the world (excluding countries with fewer than 1 million residents) and 8th in per capita deaths in the world.

Deaths are now averaging 718 per day in the U.S., down from 736 per day a week earlier. The impact of the recent surge in cases in the mid-west is beginning to show in deaths, as Missouri led the country in deaths, yesterday. The states with the most deaths were Missouri (61), Florida (48), California (36) and Georgia (31).

The rise in cases continues to be reflected in depth and breadth. Last week I reported five states with multiple thousands for the day and sixteen with 1,000 or more. This week, on the same day,  five states reported multiple thousand and sixteen states reported at least 1,000 new cases. The states with multiple thousands included Illinois (4,245), Tennessee (2,605), Texas (2,577), Florida (2,539) and North Carolina (2,303). Despite the fact that southern states largely topped the list, the full sixteen includes about an even split between the mid-west (6) and the south (5), with a mix of others.

President Trump appears to have recovered from the virus and is traveling the country hosting large rallies, as has been his campaign style. The White House Task Force seems to be under the primary influence of Dr. Scott Atlas, a neurobiologist who tweeted this week “Masks work? NO!” The tweet was subsequently removed by Twitter as misleading. In good news, NYC found only 18 positive tests among 10,000 students tested in its schools. Only two states are trending downward for new COVID-19 cases: Vermont and Hawaii.

For the weekend (Friday through Sunday), the state of Tennessee reported just over 5,900 new cases (666, 2,646, 2,605). Friday’s abnormally low number came with the lowest number of tests reported (5,850) for a single day since July. The other two days represented the fifth and sixth highest single-day totals since the beginning of the pandemic.

For the same three days, Tennessee reported a total of 45 deaths (7, 32, 6). The current seven-day averages for deaths is 20 per day, which compares to 27 per day a week ago. Deaths from the illness now total 2,909 for the state since March.

The pace of new hospital admissions has slowed slightly over the last few days, with 22 admitted yesterday, bringing the total number of Tennesseans hospitalized since the beginning of the pandemic to 9,577. The slower pace of admissions has resulting in a dropping census for yesterday, the first such drop since the beginning of the month. The current number of Tennesseans in the hospital with COVID-19 is 1,188, up from 846 a week ago. Of these, 371 are in ICU and 171 are on ventilators. Each of the latter two numbers represent highs for the last six week and are up from 283 and 144, respectively, from a week ago.

The number of tests reported each day continues to be erratic, likely due to reporting schedules. After Friday’s extremely low total, Saturday and Sunday rebounded to a more normal-to-high level for the state. For yesterday, the state reported a 7.52% positive test rate. Johns Hopkins reports the seven-day average as 8.3%, the highest it has been since early September.

In state news, Governor Lee is now in quarantine after a member of his security detail tested positive. He reports having no symptoms and testing negative, thus far. WUOT was the first to break the news that the White House Task Force report issued to the state last week included, “a statewide mask mandate must be implemented to stop the increasing spread among residents in rural and urban areas of Tennessee.” The report was not released, and was only gained via a Freedom of Information request from the station. The governor said he had not released the report because, “Multiple streams of data from multiple places is not helpful to people.”

It’s hard for states to know what to do when conflicting messages regarding masks are given from the President, members of the task force, like that above from Dr. Atlas, and a recommendation from the same group that not only contradicts them on the efficacy of mask wearing, but also strikes directly at the heart of the controversy of mandates, saying we “must” institute a state-wide mandate.

Asked for a response to the report, Governor Lee issued a statement that said, “The governor’s view has not changed based upon non-binding recommendations from the federal government. Previous White House reports dating back to the summer have included similar recommendations, so the inclusion here is not novel.”

The impact of reported state testing levels continues to be a predictor for local case numbers. On Saturday, the day after the state reported its lowest total tests for a single day in months, Knox County reported 44 cases, its lowest daily total in over a month. Sunday that number went up to 110 and to 125 today. Case totals for the county now stand at 11,714 confirmed cases and 555 probable cases. 10,949 people have recovered and 1,225 remain ill.

There are currently 64 in the hospital (up two from Friday, down two from a week ago), to bring the total hospitalized since the beginning of the pandemic to 429. Three additional deaths were reported over the weekend, bringing that total to 95. The three who died were all over 75 years of age. Nine people in the county have died of COVID-19 over the last seven days, while only two had died the previous twelve days.

The University of Tennessee continues to report extremely low numbers of student and staff infections with the virus. At this time, they are reporting 39 active cases, compared to 59 a week ago. 1,618 students and staff have been reported positive since the beginning of the pandemic. 13 new cases were reported over the weekend, including 9, yesterday. The number of quarantines/isolations has also dropped, and is currently 269. A week ago the number was 293.

As of the time of the publication of this report, the Knox County School System had not updated their numbers since prior to fall break. New numbers should be released this afternoon.