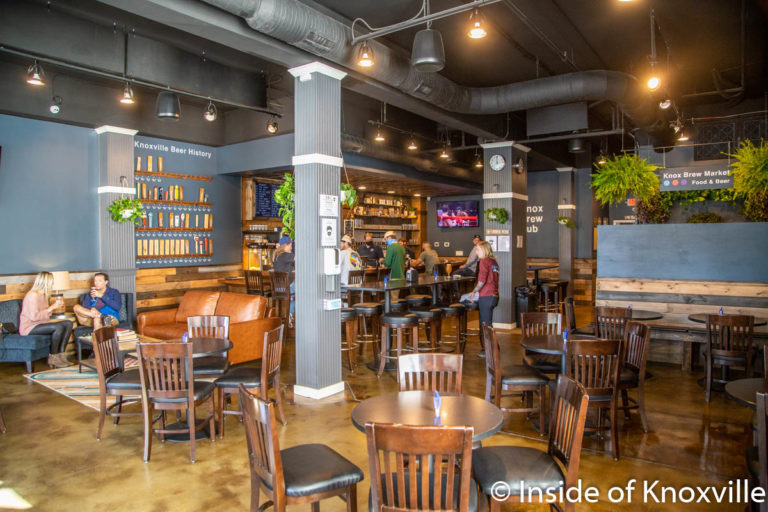 Zack Roskop officially opened Knox Brew Hub this past weekend and will host a ribbon cutting today. It was only two months ago that I wrote about the plans for the bar with Zack ambitiously targeting the first week in October for opening. It took an extra week or so to get the details right, but the results speak for themselves in the beautiful space.

For those who remember the location as Casual Pint, you’ll notice large changes upon entering, including a reduction in coolers, leaving more space for seating. Capacity will increase later, but is limited to 50 out of concern for safety during the pandemic. The space is nicely divided into sections, making the entire space feel cozy and warm.

The front end features directional signs listing local breweries, and the transportation theme is carried through once you enter. The front corner features maps for patrons to pin their hometowns and also serves as the departure point for Knox Brew Tours, which is also owned by Zack.

A map of the downtown and larger Knoxville area, featuring locations of local breweries, adorns one wall. It’s one of the touches you’ll find inside by local artist Lauren Lazarus. As I looked around the new space, the map was being photographed with cell phones. The opposite wall hosts a history of local beer starting in the 19th century, moving through prohibition, and ending with the current golden age of Knoxville brewing.

A bit further back, past the comfy seating and small tables, you’ll find the Knox Brew Market, with plenty of cans of local beer to go, as well as other beverages. Featured are sandwiches lovingly made at Holly’s Gourmets Market, chips, dip and other sundries. It’s a great place to grab lunch on the run or to take to a table and enjoy with a great beer.

And beer is the main feature. Behind the bar, you’ll find twenty-two taps, probably featuring a wider range of local beers than you’ll find anywhere else you might want to look. In addition to the wide spectrum of beer-styles, you’ll find cider and the currently popular seltzers. They also have sodas and even kombucha. Plans call for bringing in a couple of wine choices in the near future.

Additional food served at the bar includes four different popcorns paired with just the right beer, a ploughman’s lunch, and a charcuterie board. You can also enjoy a delicious hummus with your beverage.

After a series of soft openings, Zack threw open the doors this past weekend to a great reception. The ribbon cutting is today and the hours for now are Noon to 11pm Monday through Saturday and Noon to 10pm on Sundays

As Zack said, “I can’t wait for people to see what we’ve done with the place! It’s always been my dream to open a bar where people can gather with friends and family for a good time and great beer. Now that that dream is becoming a reality, I can’t wait to see people’s reactions! We really wanted to create something unique yet familiar with the space and we think we’ve accomplished that goal!”