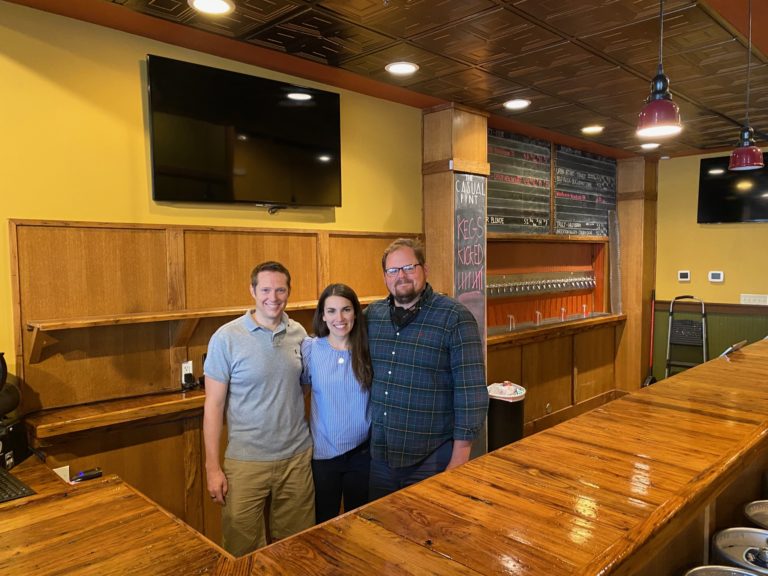 Less than a month after announcing the closure of downtown’s location of Casual Pint, comes the announcement that well-known local beer personality, Zack Roskop, will open a bar at the location. Knox Brew Hub, AKA “The Hub,” should open the first week in October at 421 Union Avenue and promises to live up to its name in becoming a downtown hub for the craft beer scene in the area.

Appropriately, I first met Zack at the address as Casual Pint has recently changed hands and he had just launched Knox Brew Tours. It’s only fitting that nearly six years later we met in the same location to discuss his vision for the new bar and how it fits into his various endeavors, particularly Knox Brew Tours.

Zack said that just a few short months ago he had no intention of opening a bar at the location. Alan Knauth, co-owner of the former Casual Pint at the location, and good friends with Zack, called him and told him that he and Natalie were closing the bar and they wondered if Zack might be interested in developing a concept there. He said, “no.” 2020 was to be his year to continue to expand Knox Brew Tours. Already running three buses, he felt the time had finally come for the company to blossom.

Meanwhile, with the pandemic ongoing, Knox Brew Tours had to look for new methods of doing business. No regular tours have run since March. The company did food and beer deliveries and Celebration buses (blasting music for hire) for special events. They did Cul De Sac Concerts in conjunction with Born and Raised Productions, to help local musicians have work and they offered Adventure Shuttles for small, private groups. He is very grateful to Grayson Subaru which continued a sponsorship throughout.

In June he asked to look over sales reports and other data, along with his Dad and brother. He met with Alan and Natalie, and then landlord Tim Zitzman who, acknowledging the difficulties at this time, offered a generous lease. He reached a deal for the contents of the former business and signed a lease at the beginning of August.

Zack has big plans for the space. The interior will have a similar design to a train, subway or bus station. He intends to make it “The Hub” for everything craft beer in the city. Zack has been extensively involved with the formation of the Knoxville Area Brewer’s Association, along with its Ale Trail, and currently serves as President of the Board of Directors. His Brew Tours helped highly an industry that was just beginning to take off when it started and it has served as a connecting point ever since.

His intention is to do for craft beer what Visit Knoxville has done for downtown, to be an ambassador and likely the first interaction many visitors to the city and some residents will have with the craft beer scene. The changes he will make  to the interior will highlight everything that he has been touting for years.

He plans to open the space up dramatically, with the removal of a number of the shelves which have been a fixture of the space. He’s keeping the two coolers, albeit with the noisy generators moved outside the bar area, and they’ll be facing each other in the rear, forming a sort of bodega with newspapers, merchandise, snacks and cold six packs of the most popular beers carried by the former business. Thus, take out will be preserved, but the emphasis will be on in-house sales and consumption. Bathrooms will be updated and warm colors will be incorporated throughout.

He wants the remainder of the space to feel warm and welcoming and the travel theme will emphasize the idea that patrons are embarking on an adventure. Two digital, split flip screens above the bar will contain the typical information about the available beers, but they will give the appearance of an arrivals and departures board. Also behind the bar will be a dispenser for growlers and a cooler with soda, seltzer, ciders and singles.

The 22 taps will feature local and regional beers and he hopes to have as many Knoxville breweries as possible represented. He’s lining up collaborations for beers that will only be available at his bar or at the brewery involved. He plans to release a firkin in conjunction with Alliance Brewing every First Friday.

Also behind the bar, the glassware will be a focus. “As a craft beer nerd, when I see a bar has paid attention to the glassware, it shows how much they love craft beer.” A bunch of industrial issue glasses simply say its another bar. His glasses will be prominently displayed around a mural that announces this is the “Union Avenue” stop. Above the display you’ll find an empty bottle of the Celebration Ale that he enjoyed with friends the night he signed the lease and you’ll see the dollar Johnny Miller paid for that “first round.”

Drinks will be served from behind the bar, but he hopes to have servers coming to tables and taking orders via mobile devices that read directly to the bartenders. Only, he wants the bartenders to be “guides” taking patrons on an adventure through local beer.

Some of the bartenders will also be drivers for Knox Brew Tours, so they can offer sign ups for tours from behind the bar, as well. Zack wants the entire vibe to be one of adventure and travel, a place where you might mingle with locals and visitors and you might discover the love for craft beer that is so important to him.

There will be a large television for sports, but there will be a very cool Lauren Lazarus mural coming out of the television and running around the entire bar. The mural will show stops along the routes to craft beer spots in the area. Other touches will include a long bench like you might find in a train station, facing tables just outside the bodega.

Zacks other businesses will have a presence. His Knox On Tap radio show (WUTK, 6 pm to 7 pm on Tuesdays) will be broadcast from a high-top table inside, with an “On Air” sign outside the front door lighted when they are broadcasting. He hopes to feature a beer connected to each guest and host a happy hour before and after the show in which patrons can interact with the guest. He frames it as a “Blue Plate Special of beer.”

The departure area for Knox Brew Tours will be outside and the spot to check in, make reservations and purchase merchandise will be in a small area to the right as you enter the front door. He pictures a map with pins marking where tour participants came from and he plans to have maps to all area breweries available to hand out.

Other touches inside include beer barrel end-tables, an analog clock mounted from a column like you might find at a train station and a 3-D display of tap handles that will tell the history of the local beer industry. It will cover bars and brewing from the 1800s, through prohibition and up to the current renaissance in local beer. He’s going for a classy, but not high brow vibe like you might find in an elegant station.

It’s early to consider hours and the state of the pandemic in October may have something to say about that, but he’s thinking noon to midnight sounds about right. He plans a Grand Opening, but realizes it will likely have to be planned to accommodate current guidelines. He’s imagining allowing groups of 30 by reservation for an hour-and-a-half, followed by cleaning before the next group enters.

Zack’s family has owned and operated restaurants and they’ve always been entrepreneurial, so this feels like a natural next step. His parents, Fred and Trish Roskop are helping him launch and his older brother, Dylan, is a minority partner and is providing help, as well.

In the end, Zack says, “We won’t serve beer, we’ll serve people. The goal and mission is to promote local beer.”