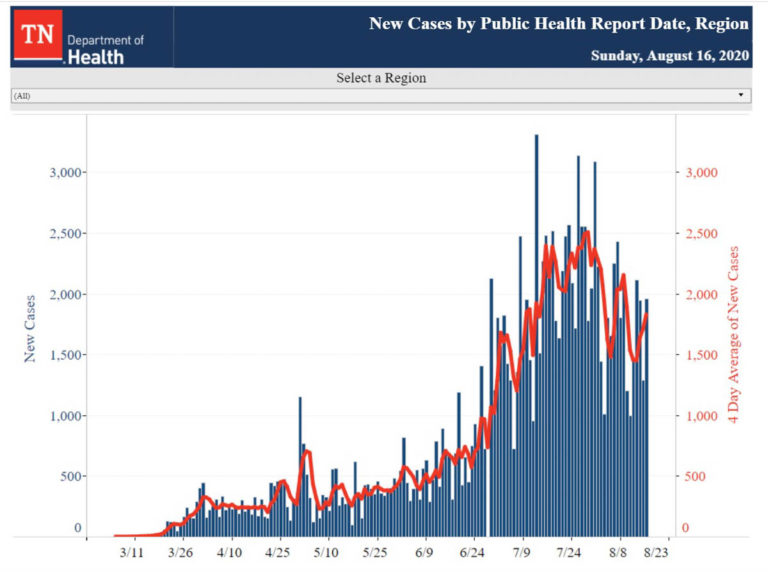 Welcome to a new week. Here’s hoping it is a good one for everyone. There are some good numbers being reported. On the upside, I am seeing more people wearing masks downtown, so hopefully that will help us continue to turn a corner in our eventual return to a more normal day-to-day. On the other hand, I drove past a soccer field this week and saw no masks and a huddle of about fifty coaches and players in the middle  of the field, so I’m not sure we’re all quite on the same page. Please be careful, friends.

21,876,707 people have been diagnosed and reported to have COVID-19 across the world and 773,850 deaths have been attributed to the illness. About 14.6 million people have recovered and another 6.5 million cases remain active. Yesterday saw 212,597 new cases and an additional 4,531 deaths.

The 212,597 cases reported yesterday is the lowest single-day total since August 3. Relative to the same day last week, it is about 7,000 fewer. As a result, the seven-day moving average dropped slightly from the day before and now sits at 258,372. The average peaked at 261,384 this past Friday and has remained in a narrow range, roughly between 254,000 and 261,000, for the last three weeks.

Notable from the list: Eight of the countries are in Central or South America. Iraq is experience its first true wave of the illness, which has been building since early June and reached a single day record for new cases yesterday at 4,348. France saw back-to-back days of over 3,000 new cases for the first time since April this past weekend.

In other news, it’s not as if Lebanon needed more to worry about, but a continuing spike in cases has a minister calling for a lock down. The virus has dealt a significant blow to India’s middle class. Fears are also rising in that country of large spread in rural areas. South Korea is seeing protests to its lock down efforts and one of the vocal supporters of the opposition has tested positive for the virus. He is a minister of a church that has been linked to over 300 infections.

Relative to a week ago, the number of new cases for the day is dramatically lower, with over 48,000 the same day last week and 49,000 the same day two weeks ago. It was the lowest single-day total reported since June 23. The seven-day moving average is now at 52,142 new cases per day, down from a high of over 69,000 about three weeks ago and down about 2,700 from a week ago. It remains about 2.5 times as high as the low we reached after our lock downs in April and May.

The 522 deaths reported yesterday is the lowest total reported in the last two weeks. The seven-day average for deaths is 1,065 per day, slightly higher than last week, but lower than the week before. Three states well out-paced the others in deaths yesterday: Florida (107), Texas (107) and Louisiana (74).

A comment on this blog recently noted that, after a certain point, the numbers become a blur. We become numb to the totals and they lose their impact. I feel some of that, myself. A couple of comparisons on the staggering and still rapidly increasing death toll of the illness in our country might help: About 3,000 people died in the 9/11/2001 attacks, about the same number of people who are currently dying every three days from this illness. About 57 times more people have died of this illness.

For additional perspective: In six months enough Americans have died from the illness to likely rank as the third leading cause of death for the year behind heart disease and cancer. The flu comparison, so popular early in the pandemic for those who wanted to diminish the severity of the issue, has also fallen apart: More people have died in six months from COVID-19 than the last four years combined of the flu. And this with over 1,000 a day continuing to die and a fall/winter that some experts feel will be even more severe than what we’ve seen so far.

Testing continues to be interesting and it got a lot of focus over the weekend, with numerous sources discussing the drop I’ve been mentioning for a while. Business Insider reported a 13% drop in tests in the U.S. in the past two weeks and said the system is broken. From that article:

The US performed about 708,000 daily tests, on average, over the past week, compared with nearly 818,000 at the end of July. Some states have seen even more dramatic declines: Texas’ weekly average of coronavirus tests administered has fallen 45% in the past month. Arizona’s has fallen by 36%, and Florida’s by 27%.

The New York Times also did a piece on the decline in tests, as did NPR. There are a number of reasons given for the decline, but no one is completely certain what has happened. Interestingly, there have been a couple of single-day surges recently in Texas, which have influenced the over-all numbers, but Texas reported small numbers of positive tests out of the massive test surges, dropping their positive-test result rate dramatically and suddenly.

New York’s infection rate is below 1% for the first time since the pandemic hit and, as a result, schools and gyms are opening. U.S. doctors are reporting that they regularly work with patients who believe social media posts more than the doctor’s professional advice. Some scientists are thinking a lower number may be required for herd immunity – perhaps as low as 50% and there may be places like some parts of London, New York City and Mumbai that are close to that level. The Institute of Health Metrics says that 31 states have not reached their peak with COVID-19 and it projects dates for when each state will do so.

A total of 133,708 residents of Tennessee have become ill with COVID-19 and 1,366 deaths have been attributed to the illness. About 92.6 thousand have recovered and About 39.7 thousand remain ill. Yesterday an additional 1,961 cases were added and 21 deaths were reported, along with 555 who recovered.

The four-day moving average of daily cases is at 1,829, significantly lower than its peak of over 2,500 at the end of July. While testing has not approached the peaks of over 40 and 50 thousand some days last month, it has increased over the last week and perhaps the most encouraging news is that the rate of positive tests has declined to 7.6%, the best it has been in over a month. 27.6 thousand new tests were reported yesterday.

A relatively small number of thirty-four people were hospitalized yesterday and the number of COVID-19 positive hospital patients has declined state-wide over the last two weeks to 959 from 1,103. ICU and Vent patients have also declined. There are 180 pending cases in the hospitals, another number that has declined. Average number of deaths have remained fairly steady recently, at one side or the other of 20, and currently are precisely that: 20.

Locally, the Knox County Health Department reports 5,429 total cases and 50 total deaths since the beginning of the pandemic. 3,255 people have recovered and 2,318 remain ill. The number of active cases is a new high. That said, there has been some slight recent improvement in daily case totals. The Health Department reported 111,73 and 111 cases from Saturday through today. Two additional deaths were reported over the weekend. 33 Knox County residents are currently hospitalized, perhaps on the low-end of the range we’ve seen recently.

In other state and local news, Bearden High School has suspended football for two weeks, including canceling its first two games. The Knox County Schools had previously reported two positive cases associated with the team, but said the players were not at risk. Days later they made this move. A state legislator from Ooltewah has been placed in an ICU as he battles COVID-19. Bars are re-opening today in Nashville.