Wither and Bloom Designs Opens Just Outside the Old City 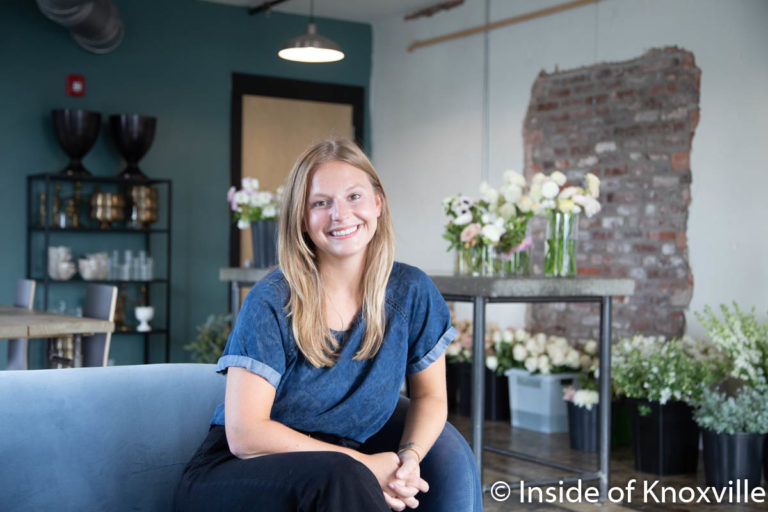 A new shop has opened at 1154 McCalla Avenue, just outside the Old City in the Electric Company Building. Wither and Bloom Designs is the new business started by Lauren Stovall. It reflects her life-long relationship with flowers and becomes the most recent business to set up a brick-and-mortar location around downtown.

Is it risky to start a business during a pandemic? Yes, but Lauren says taking risks has always been part of her personality. Born and raised in Memphis, when she graduated high school she didn’t want to simply follow one of the various paths chosen by her friends. Instead of attending a local or state school, she moved to New York City and studied musical theater at Mary Mount Manhattan College.

She was attracted to the school because it was an arts school, but also offered a full liberal arts education. She studied visual arts, musical theater, vocal performance and sculpture. She also fell in love with the flower markets, having always had a love for flowers. She started picking up flowers and doing designs as another creative outlet.

While she’d only visited New York City once before enrolling in college there, she loved the city and appreciated her time there, but near the end of her second year, she realized she didn’t want the grind of a career in musical theater. Her day started with a two hour dance class across town, a return to all-day classes. The trips were made carrying books, changes of clothes, food and more and it was exhausting. She watched friends doing auditions and realized they’d likely have to move to one location in the U.S. for several months, then another and another. It didn’t seem like a real life.

She remembered her visit to UTK and decided to return for her final years of college. She realized she longed to enjoy a less competitive atmosphere. She transferred to U.T. and fell in love with the school, the city and the surrounding natural landscape. She’d taken a course in Social Work in New York City and selected that major at U.T., while working part time at a floral shop. She somehow felt the two were connected and enjoyed them both, seeing them both as a service to make others happier. She spent hours at home working on floral design.

She planned to move straight from college into work in a floral shop, but was offered a job in the social work field, which she accepted. Looking back, she says it was probably a reflection of some fear of taking the leap into what she really wanted to do. After missing flowers for about a year, she followed her heart, quit the job and began working once more as a floral designer.

She worked the full-time job at the Cache Pot in Bearden for a year and feels it gave her a great spring-board into launching her own business. She said the owner, Natalie, was very helpful and while there she learned technical skills, mechanics and the details of operating a business.

She knew she wanted her own business and wanted to continue developing her own style. She set out on her own last spring and soon gained small clients and then a wedding for the fall. She began connecting to vendors, venues and wedding photographers. She offered to do freelance work with florists, developed an Instagram following and reached out to large floral business which do very large weddings and large installations. She got work with an Atlanta florist working on a large wedding and and through them connected to others.

She entered 2020 with a lot of momentum and events scheduled. In March, events began to be rescheduled, freelance work began to drop off. It did not look good. “I could go into a hole or I could pivot,” she said. She pivoted. Changing the business model, she offered contactless floral delivery and it went really well through April and May.

“So many people were sending flowers to others. People from other cities with touching stories,” sent flowers to those who they could not see. “I would drop them off, ring the doorbell, and get to the car as they came out. They often cried.” She said it was rewarding to be “visibly helping.” She said that was followed by “a little normal” in July. An August wedding was scheduled, others were postponed to next year.

And the risk-oriented part of her personality came out. She’d always wanted a space of her own and, determined to keep flowers relevant, she took the space from Dewhirst Properties. It will allow her to offer an array of services that she couldn’t easily offer working out of her own home. Whereas some might have seen the pandemic as the worst time to expand to a physical address, it seemed like perfect timing to her to take over an inspirational space

She’s starting with floral design classes, which will be virtual until it becomes safe to gather. Follow the link and you’ll be able to sign up for her centerpiece class which is offered Thursday, August 27. You’ll pick up everything you need at the shop and get a video teaching about the flowers and how to build your own centerpiece. She hopes to offer new classes each month and may offer a series, Floral Design 101, offering a creative outlet similar to pottery classes and others. She hopes to have Wine and Design classes in coming months.

She also continues to offer wedding and event floral design services. While she’s not a typical floral shop at this time, she’s leaving the door open for any direction in the future. For now, the shop is appointment only and she considers it purchasing an artistic experience. She hopes to introduce customers to flowers they’ve never seen. She also says she may consider pop-up hours.

She’s just launched a floral subscription which is available at the same link above or by clicking the “shop” tab on the website. In the spirit of the times, she’s offering the “Covid Special,” for brides and grooms with elopements on their minds. She’s also going to temporarily offer ala carte floral services with an eye toward returning to full-service only when the pandemic passes.