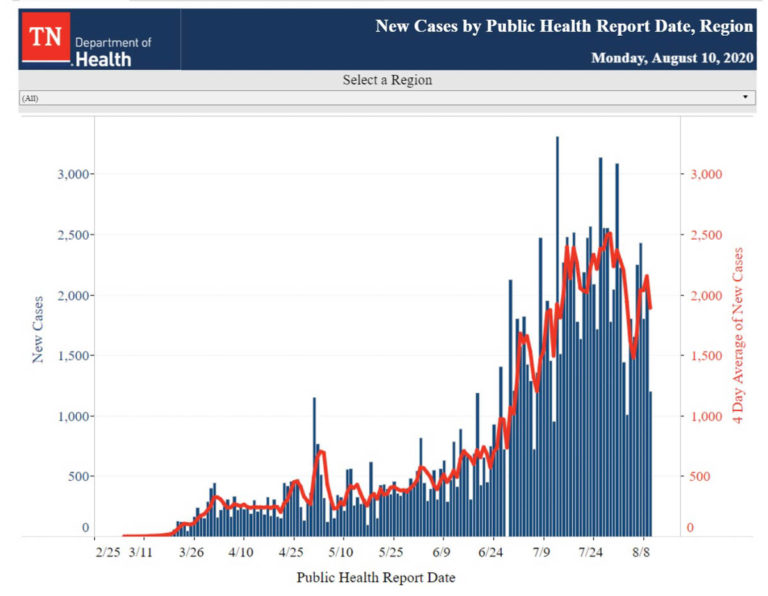 It’s a new day and a great day for beginnings. I was pleased to tell the story this morning of a new business opening in the downtown area. Lauren’s inspirational spirit during a difficult time was good for me to hear. Despite obstacles, whether international in scope or very personal, we all have the opportunity to find a new path forward, to pursue dreams and to and to work toward a better day. Today’s a good day to start the journey.

Yesterday’s new case total reflects an increase of more than 16,000 over the same day last week. Consequently, the seven-day average has shown an increase, reversing the slow downward trend in world cases over the previous two weeks, but remaining in the narrow range where it has remained for that period. The seven-day average now sits at 257,998 cases per day.

Yesterday’s 4,580 deaths compares to 4,397 the same day the previous week, or an increase of about 200. The seven-day average, continuing its slow upward trend, is now 5,886 deaths per day. This is roughly the same as the death rate at the end of April. Countries reporting the most deaths yesterday include India (887), Brazil (721) and the U.S. (569).

The flattening may be real in both Brazil and Colombia as they have improved their testing programs significantly. India is also increasing testing, but their massive population makes achieving desired levels difficult. The U.S. continues to lead the world in total testing, with over 66,000,000 tests given. In countries with over 1,000,000 in population, the United Arab Emirates (Population 9.9 million) leads the world in testing per million. In countries with over 10 million in population, the U.K. leads the world in per capita testing and the U.S. is third.

Mexico has started phase three trials for vaccines from China and the U.S. Amid international skepticism, Russia has registered the world’s first coronavirus vaccine, though testing continues. A Brazilian state has offered to manufacture the new Russian drug. New Zealand, which had reported over 100 days with no new cases of COVID-19, now has reported four new cases. As a result, Auckland, the country’s largest city, will begin a new lock down on Wednesday.

The seven-day average increased yesterday to 55,142 after a slight increase over same-day numbers from last week. It’s the most recent indication that the decline experienced over the last three weeks may be leveling off. It remains about 5,900 lower than a week ago, when the numbers were continuing to decline.

The 569 deaths reported yesterday corresponds closely to the 546 deaths reported the same day the previous week. The seven-day average sits at 1,038 and has remained within about 100 of that number since the beginning of August. The welcome leveling comes after a month of steady increases.

Both Florida and Texas are testing far few people than just a few weeks earlier even though each have an extremely high positive test result rate of one side or the other of 20%. The rate of U.S. homicides always increases in the summer, but this summer is seeing an unusually high spike which may or may not be related to emerging from lock downs. Amid reports the Big Ten may not have a football season this fall, President Trump is pushing for a season, noting the players are young and healthy and would not likely die if they caught the illness.

123,914 Tennesseans have been diagnosed with COVID-19 and 1,233 have died with the illness. 1,202 new cases were reported yesterday, along with 10 additional deaths. 2,173 people were moved to the recovered category, dropping the active case count to 39,511. 35 additional hospitalizations were reported last night and the current total of COVID-19 positive hospitalized patients across the state is 1,113, a number which has remained remarkably steady.

About 14.8 thousand test results were reported yesterday, bringing the state total to over 1.7 million. As it has in Texas and Florida, testing rates have declined in Tennessee, as seen in the chart above. The positive test-result rates have remained remarkably steady at around 8 to 9%. Given a steady rate, the number of tests given a date will dictate the number of new cases found.

To be more concrete: Yesterday’s test number was 27.6K and the state reported 2,154 new cases (7.8%) and today the test number reported dropped to 14.8K and new cases dropped to 1,202, which sounds like an improvement, when it is nearly identical to the day before in positive test result rates (8.1%). It’s actually slightly worse. This is why averages matter, but even the averages are not helpful if testing is declining or inclining.

The four-day average the state uses, now sits at 1,891, while the seven day average for new cases sits at 1897. To compare them to recent averages is hampered significantly by the decline in testing.

It raises the question of whether our local numbers are reflecting improvement or a reduction in testing, as well, since our local data is a part of the state total. Locally, case numbers have fallen in recent days to fewer than 100 each day, and the update on numbers of tests reported will be interesting to see tomorrow. Prior to recent days, the number was running consistently over 100. A hopeful thought would be that masking is helping. The numbers are only a fair comparison, however, if testing has remained consistent.

Today, Knox County is reporting 84 new cases, to bring the total number of Knox County residents testing positive to 4,868. 2,728 people have recovered and 2,261 remain ill. The number of active cases has steadily remained between 2,000 to 2,300 for nearly two weeks.

Twenty six Knox County residents are currently hospitalized with the illness, bringing that total to 223 since the beginning of the pandemic. This number also represents a decline in recent weeks, which is, perhaps, the best indication that we’ve truly improved. No additional deaths were reported today. Probable cases, contrary to all the other numbers, have been rising and now sit at 167.