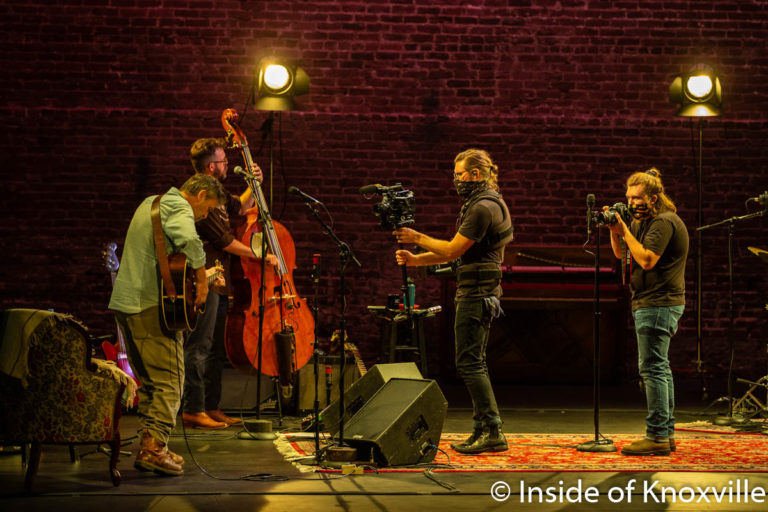 For many of us who passionately love music, one of the greatest losses of the current era is the loss of live music. Being in the presence of live musicians, watching the interplay between band members and being moved by a brilliant solo or incisive lyric is something we live for. One of the first local blows to our musical landscape was the loss of Big Ears.

While the range of live music and the opportunities to see it are not likely to re-emerge to the same degree in the  short-run, we search for alternatives. One of the most exciting alternatives is being presented by Big Ears. A series of streaming events, Sites & Sounds from Big Ears, featuring singular musicians in special surroundings will kick off Friday August 21 at 8:00 PM with RB Morris and his band playing on the stage of the Bijou Theatre.

R.B. Morris, Knoxville’s first Poet Laureate and a phenomenal songwriter makes a perfect launch for the series and the Bijou is Knoxville’s “little jewel box,” as I once heard Joan Baez describe it. He’ll be joined his full band including multi-instrumentalist Greg Horne, bassist Daniel Kimbro, and percussionist Hunter Deacon. The set list for the concert will be taken from his latest album, Going Back To The Sky.

I’ve talked about this album in a previous article and its been a big part of the soundtrack of the last several months in our home. You’ll find a proper review by my friend Steve Wildsmith, here. The album will be released to streaming services on Friday. R.B. is a Knoxville treasure, called “the greatest unknown songwriter in the country” by Lucinda Williams, he counted John Prine among his biggest supporters and Steve Earle said, “R. B. Morris is the reason I started writing poetry.”

The concert stream of R. B. Morris live from the Bijou will be available through NoonChorus. Tickets are priced at $10 (plus service fees) in advance, then $12 (plus service fees) on the day of performance. After the initial broadcast on Friday, August 21 at 7pm, there will be replays of the concert beginning at 9pm that evening and continuing until 12 midnight on Monday, August 24. For information and links to the stream go to the Big Ears website. Proceeds from the stream benefit the Big Ears Festival, the Bijou Theatre, and the artists.

And Big Ears promises more, saying, this “is the first program in a new initiative from Knoxville’s Big Ears Festival called Sites & Sounds from Big Ears. Collaborating with many of the world’s most exciting and groundbreaking musicians, artists, writers, and filmmakers, this new Big Ears initiative will encompass both full-length concerts and shorter vignettes from regular Big Ears venues as well as non-traditional locations throughout Knoxville, and further afield. The programs will also include talks, interviews films, readings, and more. The next programs in the initiative will be announced later this month.”

I hope you’ll buy tickets and support this new project. Nothing says the weekend like live music and this is a way to keep the flame alive until we can, once more, join together to celebrate the performing arts.