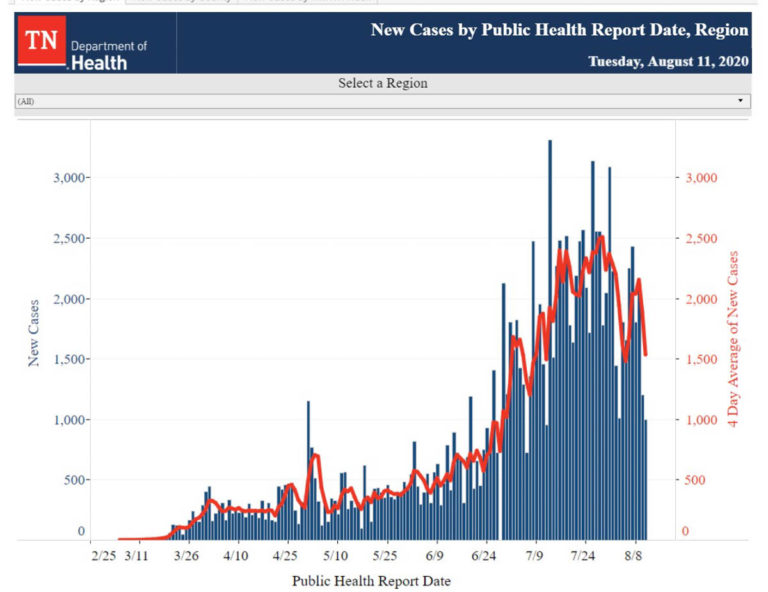 Good Wednesday! We’re halfway through another action-packed week. New benchmark information is provided below which should give us a glimpse of how we are doing locally. Recent numbers of hospitalizations seem to be better and deaths may be slowing, so that is encouraging. At tonight’s Board of Health meeting the board will consider reducing the number of people allowed to gather from 50 to 25. I’ll tune in and report, of course, but if you’d like to watch the drama unfold in real time, you can do so a number of places, including Knox County’s Youtube Channel or CTV (via your television or online).

The total number of reported cases of COVID-19 worldwide since the beginning of the pandemic is 20,602,936, with 747,455 deaths attributed to the illness. About 13.5 million people have recovered and 6.35 million people remain ill. Yesterday, an additional 266,160 people were reported to have the illness and 6,556 people died as a result of COVID-19.

Yesterday’s total of new cases is about 10,000 more than the same day the previous week, which moves the seven-day average from yesterday’s 258,027 to 259,422. The average is rising, once more, after dipping slightly for about a week.

The number of deaths yesterday is also above the same day last week, by about 260. Accordingly, the seven-day average increased very slightly to 5,918 deaths per day. The very slow upward trend has been in place for 2 1/2 months, with a small drop or two along the way. The current number of deaths per day remains about the same as that in the last week in April. Countries reporting the most deaths yesterday were in order, the U.S. (1,504), Brazil (1,242), India (835) and Mexico (705).

The same four countries continue to shuffle their order at the top of the number of new cases each day. At the top of yesterdays list were India (61,252), Brazil (54,923), the U.S. (54,519) and Colombia (12,830). Twenty-eight countries reported at least 1,000 new cases. Nine of the 28 are Central or South American countries. Germany, the U.K., and France have joined the group and Spain has now re-entered the top ten in new daily cases.

The top countries for total cases since the beginning of the pandemic has shifted in recent weeks. Early, hard hit countries like Italy and France are no longer in the top ten for cases, having been replaced by Latin-American countries. From Europe, only Spain remains in the top ten of total cases. The top ten totals for the virus in the world are found in these countries (in order): the U.S., Brazil, India, Russia, South Africa, Peru, Mexico, Colombia, Chile and Spain.

The average number of new cases continues to remain roughly even over the last five days after significant drops in the weeks before. The seven-day average now sits at 55,123, a drop of 19 from yesterday.

The 1,504 deaths reported yesterday is slightly higher than the number reported the same day last week (1362) and as a result the seven-day average moves up slightly to 1,059 deaths per day. States reporting more than 100 deaths yesterday include Florida (276), Texas (220), California (182) and Georgia (122).

U.S. testing rates continue to drop and trend is most clear if you examine particular states such as Texas where testing numbers have fallen off a cliff and their positive result rate is soaring, or in Florida, where testing has also cratered while their positive test rate remains in the high teens at 17.2%. The drop in testing necessarily impacts the decline in numbers of new cases. If positive test rates remain consistent and you test 25% fewer people, you will find 25% few cases. And spread will continue.

The state of Tennessee reported 1,001 new cases yesterday, its lowest number in a month. The number is almost identical to the 1,008 reported on August third and to the number reported July 12 (954). The other thing these three days have in common is that each of them included 10,000 to 12,000 tests in the results for the day. Tennessee has reported over 20,000 tests per day on 28 different days. Six of our last ten days have been under 20,000, including 12,785 yesterday. We continue to have roughly the same positive test rate we’ve had for months, currently at 8.4%.

A reader, J.J. Rochelle, helpfully put this chart together from the Tennessee State Data Center which illustrates the correlation perfectly:

Tennessee has reported a total of 124,915 cases of COVID-19, 85,313 recoveries and 1,271 deaths. Yesterday, along with the 1,0001 new cases, an additional 38 deaths were reported. Active cases dropped overnight by about 1,200 to 38,331. An additional 125 people were hospitalized with the illness, yesterday, but the total currently hospitalized dropped to 1,094, slightly lower than two weeks ago. ICU and ventilator use is also slightly lower.

Locally, 68 new cases were reported by the Knox County Health Department, continuing our trend toward lower numbers. As you’ll see, I asked a question in today’s press conference regarding testing and new cases locally. If the total state testing numbers are dropping, that number is derived from reports from all the counties, so it seems logical the same trend would be happening in some counties including, perhaps, our own.

Daily test numbers are not reported publicly for Knox County, so all we have are the weekly numbers supplied by the health department. For the last five weeks, the number of tests reported by our health department are as follows: 5,401, 5,994, 4,378, 4,204, 4,038. The final number is provisional. You can see the explanation given below.

You can also see on the chart below that our cases started dropping three weeks ago. The drop in testing is unfortunate for another reason: The drop happened about the same time we instituted a mask mandate. It becomes more difficult to know if the mandate has helped given the drop in testing.

Charity Menefee chaired today’s meeting. She said visiting a park can be a safe way to enjoy ourselves during the pandemic. She suggested avoiding crowded parks or crowded times, avoid high-touch surfaces and distance from others. Take your mask and don’t share food or utensils.

She mentioned tonight’s Board Meeting. She confirmed the above numbers. The total number of deaths dropped to 45, reflecting two people taken off the Knox County numbers, as they were duplicates. She reviewed the benchmarks.

For cases, the benchmark was moved to yellow from red as there was only one three-day period of concern in the last two weeks. She said there is a sign of stability, but they are concerned with schools opening, UT students returning and the Labor Day holiday looming. Testing remains green as they are pleased with the numbers there and the same with public health capacity. Hospital capacity remains yellow as determined by the hospitals. Deaths continue to increase and that benchmark remains red.