The Board of Heath met for their regularly scheduled meeting with an item on the agenda to consider reducing sizes of social gatherings which would be allowed under current regulations. The current limit was fifty and up for consideration was reducing that to 25.

Dr. Buchanan presented the benchmark and other data, as was reported in this morning’s meeting. As stated this morning and as displayed on the website, the benchmark for cases was moved from red to yellow and the others remained as they were: Testing (Green), Public Health (Green), Health Care Capacity (Yellow) and Deaths (Red).

Charity Menefee added a piece of information they did not know earlier today: They have determined that at least one case did not have contacts traced. It was a case assigned to the state, which has handled 229 cases over the last two weeks. As a result of the discovery, they have pulled all cases back from the state until they can investigate and determine what went wrong and if there are others not contacted.

Dr. Shamiyeh followed up on the contact tracing, stressing that it is essential to retain control of the illness. He expressed concern about the opening of schools and colleges. He acknowledged that some students will test positive and the concern then becomes the students in all their classes. He questioned how much of a jolt to the contact tracing system that will be.

Ms. Wagoner from Knox County Schools said 80 school nurses were trained today. They’ve built a team out as the Health Department has directed. She said they can move very quickly as soon as they know someone is positive. Charity Menefee said UT has a dedicated team, as well, of over 40, and that the Health Department can help either as needed.

Dr. Shamiyeh presented the slides you see shown throughout this article. He said the number of diagnoses producing hospitalizations is looking better. The data presented generally shows trends toward fewer hospitalizations and probably deaths. The projections are looking much better based simply on recent numbers. He noted that of all symptoms, shortness of breath is the most common among those who have not done well in the longer term. He reiterated concern about what is coming next and the impact that will have on progress made to this point. 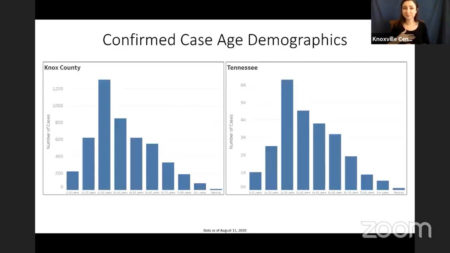 Dr. Buchanan said that Mayor Jacobs asked for a report from the Health Department regarding deaths. Roberta Sturm, the lead epidemiologist from the Knox County Health Department, gave a report saying our case mortality rate is .88. She said Tennessee’s rate is right around 1% and the country’s case mortality rate is around 3%. For people over 75, the rate is over 10%.

They discussed the mask mandate briefly. Dr. Buchanan said they are continuing to educate and work with businesses and individuals. There have been no citations. The board seemed to agree that it is helping and isn’t likely to change soon, so the report will be changed to every two weeks unless something changes.

The Social Group Transmission Suppression Order was briefly discussed next. Dr. O’Brien said he appreciates all the work that has been done on this order, but since progress is being made on cases and hospitalizations, he questions whether it should proceed at this time.

He suggested the board hold off on the new mandate unless it is needed. He said he’s heard from a number of people who are concerned about it. He hopes people can follow what has been requested so far and to avoid pursuing that. The board seemed to agree and no vote was taken.

He also asked whether the board could meet every other week since things are going well.

Dr. Gotcher alluded to a CDC document that said they have no final opinion regarding a numerical point considered safe for social meetings. He said in a large outdoor group wearing masks, for example,  spread would be unlikely, whereas a small in-door group without masks would make spread much more likely. He said the other behaviors, such as wearing masks and distancing, may be more critical.

Dr. Gotcher said he had spoken to UT and they are limiting sizes of groups to fifty and the rules apply to on or off campus meetings, sororities and fraternities, and all organizations. Dr. Hurt, with the UT College of Nursing, noted that UT has done a tremendous amount of work to prepare for students to be safely on campus.

The board agreed to meet next week and then to determine if they continue to meet weekly or if they might move to every other week. Dr. O’Brien thanked the public for all the input and said it has been very helpful. He implored everyone to follow the five core actions and continue the good trends.