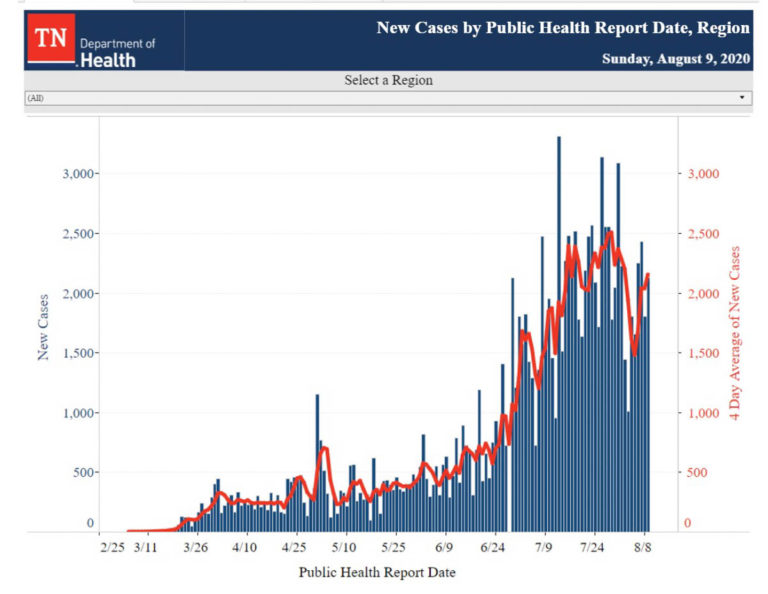 I hope you each had some happy time this weekend. We enjoyed some fresh Alabama gulf shrimp on the grill, thanks to Hen Hoc. This means so much to us. The Alabama gulf coast was home and we miss it. To have a little taste of that and to teach Urban Girl the fine art of shelling the shrimp was a delight. And we watched a bunch of bad kid movies. But, that’s OK. I hope yours was as filled with love.

The number of new cases peaked on July 31 at just over 260,000, but has remained basically in a steady pattern for more than two weeks. The number reported yesterday is about 1,300 higher than the number the week before. The current seven-day average is 254,176, a bit over 400 less than it was on Friday. The drop continues to be fueled by the drop in new U.S. cases.

The four countries with the most new cases yesterday each had more than 10,000 new cases: India (62,117), the U.S. (47,849), Brazil (22,213) and Colombia (10,611). Twenty-three countries reported 1,000 or more cases. New countries emerging in the pandemic include the Philippines which ranked tenth for most new cases, yesterday. The U.K. continues to see a steady rise in new cases and Japan is seeing its worst outbreak since the beginning of the pandemic.

Mexico is struggling with a high mortality rate, partially driven by a fear of going to the hospital which exposes family members, makes death more likely and is also fueling an under-count of infections and deaths there. Deaths topped 1,000 for a single day for the first time in India. Scientists are acknowledging what we’d already observed: Unlike what we’d hoped, COVID-19 does not seem to have (at this time) a seasonal pattern and heat does not seem to slow its spread.

To date, there have been 5,207,777 confirmed cases of COVID-19 in the United States and 165,748 Americans have died of the illness. About 2.67 million people have recovered and just under 2.4 million remain ill. Yesterday 47,849 new cases were reported and 535 additional deaths were reported.

The number of new cases continues to decline, though there seems to be a slowing in the rate of decline. The 47,849 cases reported yesterday compares to 49,636 a week earlier. The seven-day moving average of cases is now 54,882 new cases per day. That average peaked at just under 69,000 about three weeks ago and sat at 62,868 a week ago.

After rising for weeks, deaths in the U.S. declined slightly over the last week and may have stabilized at just over 1,000 deaths per day. The 535 deaths yesterday compares to 467 the same day the week before. The average daily deaths now sits at 1,036 and was 1,130 a week ago. The states reporting the most deaths included Texas (103), Florida (77), California (67) and Louisiana (56).

97,000 U.S. children have tested positive for COVID-19 in the last two weeks as schools begin to open. The Georgia school involved in the story I linked last week regarding the girl exposed for taking a video showing a lack of distance and masks has closed temporarily as nine students and staff have tested positive for COVID-19. Yesterday, Florida reported its lowest daily increase since June. New York announced a new low point for hospitalizations from the illness. President Trump signed four executive orders over the weekend related to jobless benefits, taxes and more. It is unclear if executive orders can be used as he intends.

A total of 122,712 Tennesseans have been diagnosed with COVID-19 since the beginning of the pandemic and 1,223 have died of the illness. An additional 2,127 cases were added yesterday and 8 additional people died. 80,997 have recovered, including 657 yesterday. There are currently 40,492 active cases in the state, about 400 more than the same day last week.

The number of cases reported continues to vary widely from day-to-day. Yesterday’s number was almost 700 more than the same day last week, but the four-day average, which sits at 2,154 was was actually higher a week ago at 2,201. The number of deaths also varies widely, with a low of 6 in the last week and a high of 42. The seven day average continues to remain over 20, currently sitting at 21.

Forty-two people with the illness were hospitalized across the state. The total hospitalized now sits at 970, about 100 fewer than two weeks ago. There are 197 pending cases in the hospitals, which is also about 100 lower than two weeks earlier. Testing numbers may have gone back up slightly, but remain below levels of about two weeks ago. Yesterday, the state reported about 27.6K tests to bring the total to about 1.7 million. The positive test result rate continues to remain stubbornly high at 8.7%.

Locally, the Knox County Health Department reported 92 new cases Saturday, 107 new cases for Sunday and 85 new cases for today. A pattern of alternating above and below 100 has emerged in recent days, which is an improvement from the streak of 100+ days prior to that pattern. Cases now total 4,784, of which 2,611 have recovered and 2,290 cases remain active. There are about 100 more active cases since Friday.

Across the state and county, the last two weeks have shown a stabilization or slight drop in cases. This is encouraging and may be a result of the spread several weeks ago of mask mandates. Challenges ahead include people becoming more lax, beginning in-person instruction in public schools and college students returning to campus.

Dr. Buchanan started by thanking the custodial staff at the health department for their extra work in recent weeks. She address sports, asking that parents keep six feet from other parents. She encouraged wearing a mask if you are closer or are in an enclosed space. She also asked that you miss a game if you or your child is ill.

She noted that while they are not testing today, they will do so again starting Wednesday. She also noted a small change in reporting of onset of symptoms. She confirmed the numbers above. She corrected information from last week: There was no death of a 29-year old, that person was 55. She also said the very low number of hospitalizations reported at the end of the week last week was an error. The numbers are now corrected.

She addressed clusters saying the numbers range from two to four. Community gatherings are the most common place for clusters: Like back-yard barbeques. She said clusters represent only a small portion of cases.