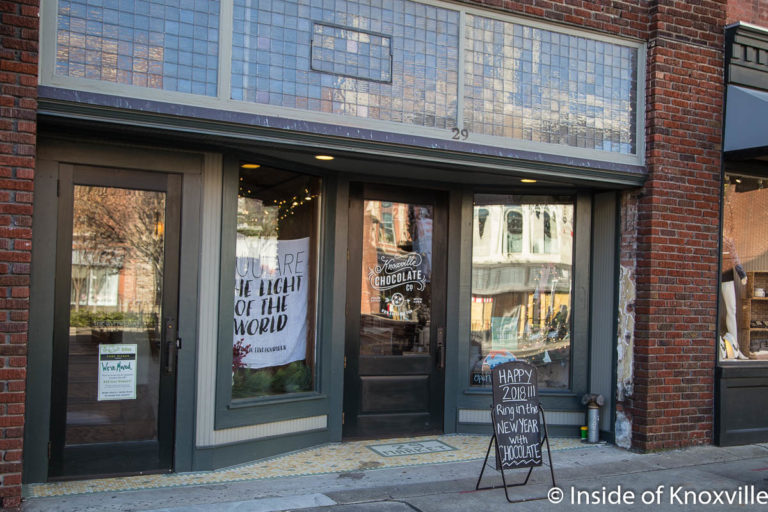 We knew there would be businesses which could not make it through this difficult stretch or simply decided it wasn’t wise to try. A number of the businesses which will shutter will have a range of reasons. For some a closure was coming in any event and the pandemic simply coincided with the closure or perhaps sped it up. Today we’ll look at two businesses closing during the pandemic, but under very different circumstance.

Knoxville Chocolate Company has closed its downtown location, which it opened in January 2018. In this case, the sister businesses will continue to operate at the west location of Bradley’s Gift and Home and online at shopbradleys.com. So, the business continues, though without the Market Square location.

I spoke to owner Brad Hammlet and asked him if he could tell us more about what led to the decision. He replied with the following (edited lightly):

When the shutdown occurred earlier in the year and as events began to be canceled we could see that downtown traffic was going to be greatly affected. For a store that’s dependent on volume, losing the farmers Market on Saturdays, restaurants going to half capacity  and all the other downtown events canceled was too difficult to overcome for an extended period of time.
We did apply for the PPP Loan and EIDL Loan, and received both. It was an extremely difficult process and took multiple attempts for both. Unfortunately, it was not enough to keep both our Market Square location and our west location, Bradley’s Gift and Home going. The cap on the EIDL loan forced us to choose between the two stores and Bradley’s is where we had to focus our business. Not only is our production facility located there, but the majority of our revenue comes from the west location.
We also realize, due to the growth at Bradley’s,  that we haven’t been able to give Market Square the attention required. Closing a business takes you on a rollercoaster of emotions. There’s sadness, embarrassment, and the constant thoughts of, “What could I have done differently?” Then there’s the moments of clarity, when you know that it’s the right thing . . . We (continue to) sell all of our chocolates at Bradley’s and online at shopbradleys.com. We’re creating a wholesale program for 2021 and have some other plans in development so it’s not the end, just a different path than we thought we would be on.
We have so many people to thank for making this journey amazing. We’re grateful for everyone that worked at our Market Square location. We appreciate Robin Thomas and Downtown Knoxville so much. Visit Knoxville was amazing,  Thank you Alan for the work you do to bring downtown the attention it deserves. We’re so grateful for every guest that came into Knoxville Chocolate Company over the past two years. We’ll miss the beautiful space we had at 29 Market Square and can’t wait to see who takes it over.

In the end, Brad made a simple, clear-eyed decision that he could only save part of his business and the loss of festivals and other events tipped the balance away from the Market Square location. It’s a reminder of how delicate an ecosystem this downtown renaissance has produced. It takes all the moving parts for some businesses to survive.
The other business which will not re-open is Myrtle’s Chicken + Beer. Speculation had been ongoing as to the fate of the downtown location of the restaurant after the west location was closed permanently. The good news, which confirms the bad news, is that a new lease with a different group has been signed for the space at 13 Market Square, which has been the location for Myrtle’s since March 2018.
Again, nothing is simple. This closure may have been pushed over the edge by the pandemic, but likely more significant to the story is the death of owner Gale Honeycutt, President and CEO of Volcue, LLC this past February. The company owns an array of businesses, including Puleo’s, Cru Bistro and Nama and others. With the death of Honeycutt, the company was forced to make decisions going forward and apparently Myrtle’s did not fit with their plan. Both Cru Bistro and Nama have reopened, but to this point, Puleo’s has not.