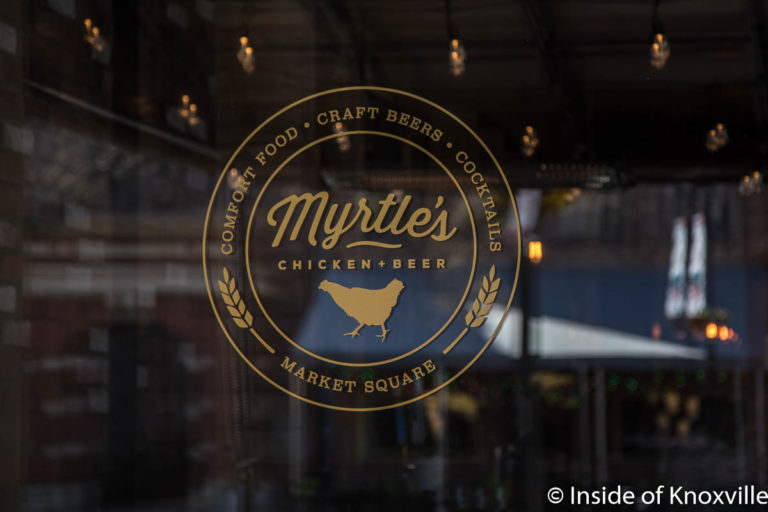 Myrtle’s Chicken and Beer officially opened yesterday at 13 Market Square. It’s taken the place of long-time Market Square business, Trio, and includes an overlap in ownership with that restaurant. Urban Brother, Urban Woman and myself set out to investigate and joined them for their first official meal in the new space.

Like Trio and many other downtown restaurants, they offer patio seating, but yesterday was just a bit too cool for comfortably sitting outside in the shade. We’re close, but not there. The interior features lots of wood, brick and Edison lighting. A few booths are available, but most of the seating is at wooden tables and chairs.

The goal of the restaurant is stated in their creed:

Not just a good meal, but food for the soul. Myrtle’s is a tribute to the heroes of Southern cooking who have created classic comfort food since the 1800’s. Like many folks in Southern kitchens over the years, Myrtle’s recipes elevated Southern cooking from simply providing meals for her family, to a culinary art form. We invite you to savor these classic Southern meals with a local craft beer or a signature cocktail and our genuine southern hospitality.

It’s southern comfort food, which isn’t hard to find in downtown, so it really needs to be good and well-priced to be competitive. After agreeing we would each order different menu items, we settled on Chicks in a Blanket ($9) as an appetizer. The chicken wrapped in waffle batter was good, but the candied bacon dipping sauce? That was magical. It was the one item we came away raving about.

I ordered the Myrtles Original Fried Chicken Sandwich ($10 – Fried Chicken Breast, Serrano Chile and Lime Slaw, Aoli and Pickles), with added cheese ($1) and bacon ($1.50). The chicken was tasty, and the taste combinations blended perfectly. And they brought lots of good, crispy bacon.

Urban Brother asked for a menu switch and got it without question. He wanted the wrap ($11, but they charged only $9), but wanted it filled with the Citrus Grilled Chicken Salad (citrus marinated chicken breast, avocado, bacon, pickled red onion, cherry tomato, apple cider vinaigrette). The wrap comes with a side and he ordered the pimento mac and cheese for which they charged ($5) as if it was an additional side. Maybe the switch in the wrap? Not sure. He said it was all very good.

Urban Brother had to cut out for an appointment, but Urban Woman and I lingered over Buttermilk Chess Pie ($5) and Over the Moon Chocolate Pie ($5.5). Both are made in-house and the crust was incredible. Heather, our very pleasant and attentive waitress, said her favorite is the Buttermilk Chess Pie, but I love chocolate, so we gave both a try. Both were very good, but Heather was right: The buttermilk chess pie is pretty amazing. We also had two cups of coffee ($4 total), as my long-term readers could have predicted.

Those of you who are good at math will have arrived at a total of $61 before tax and tip. That’s a lot to pay for three people at lunch in downtown Knoxville, but realistically, we wouldn’t eat this much if we weren’t trying to sample a wide range at a new restaurant. I could have eaten for $12.50 before tax and tip if I skipped the appetizer and dessert, which isn’t too bad by downtown standards. I’d also say don’t overlook coming in for pie and coffee. The pie is very good and the portion isn’t overwhelming if you want just a little something sweet.

The restaurant features an array of craft beers on tap and a full bar featuring select cocktails. If you like southern comfort food, stop by and give them a try. You can also follow them on FB.

Ed. Note: Join me this weekend on Knoxcentric, broadcast live on WUTK (90.3 FM, streamed at http://www.wutkradio.com) when my featured guests will include Amy Dilworth, Director of the Knoxville Family Justice Center, Sandy Larson (Sandsation Dancers) and Ashley Capps giveing you his Big Ears Preview and recommendations. Join us at 10:00 AM on Sunday morning.