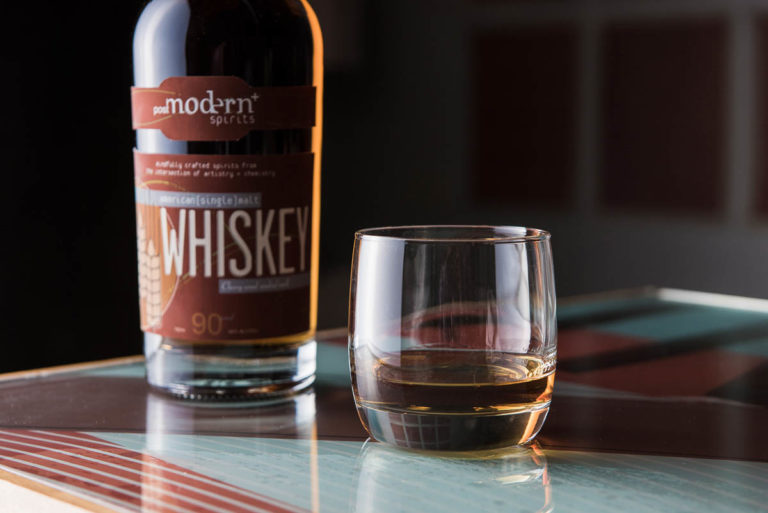 PostModern Spirits, Single Malt Whiskey, Photo Courtesy of Aaron Russell, Fist Full of Tigers
A lot has happened in just over a half year since the opening of PostModern Spirits and Methodology, it’s tasting room, cocktail lounge. Owner Stanton Webster says response has been very supportive of both bottle sales and cocktails at the tasting room. It’s allowed the business to find its feet financially and to buy time to begin ageing various whiskeys to maturity.
It’s also given the distillery and tasting room time to refine what it does, set goals and determine directions. From the beginning, being a small batch distillery meant doing some things differently: Barrels were smaller to cut time required for ageing. Some methodology was borrowed from local breweries. And Stanton recognized the collaborative spirit among local breweries and determined the distillery would be a part of a larger community of small, creative businesses.
The introduction of single-malt whiskey is both a statement of individuality – it’s modern Knoxville’s first, and maybe the state’s second single-malt whisky – and of cooperation, as the whiskey, made from 100% malted barley (no other grains like corn, wheat or rice used in most whiskeys) is, “made from the same malt recipe as Crafty Bastard’s Hawaiian BBT Pale Ale.”
Crafty Bastard Brewery and PostModern will join forces for an introductory event next Thursday (March 22), from 5:00 PM – 8:00 PM at Public House. The two will offer whiskey and beer pairings at the event. The new whiskey will be available that night, “straight or in cocktails.” You’ll be able to purchase bottles the following day, Friday March 23, at PostModern’s tasting room at 205 West Jackson Avenue. It will also represent the initial release of Crafty Bastard’s Hawaiian BBQ Pale Ale.
The fact that he’s coordinating with others in related industries is not a random occurrence. “It’s a way we can work with the people we love around town.” And the launch at the beginning of Big Ears is also deliberate. “We wanted to launch now for Big Ears visitors to see how we roll.”
Of the new whiskey, Stanton said, “It’s refined, but accessible. It’s got a little bit of a smoky character, with some nice vanilla and caramel notes and a lightly sweet finish.” And it’s all local, from the mash recipe to the distilling and ageing process. It all happens here and it’s the product of a combination of local creative minds and the cooperation that so marks many of the local industries.
“On its own, sipped neat, the American Single Malt Whiskey is great. “It’s fantastic to relax and enjoy the American Single Malt Whiskey paired with a cigar.” As is the case with all PostModern liquors, the alcohols are also distilled with an eye toward mixing well in a cocktail. “This whiskey makes an outstanding old fashioned, with a depth and complexity that accents the cocktail, and the American Single Malt Whiskey works really well with sour flavors, such as a whiskey sour.”
Those drinks and more will be available at the Public House event. In another layer of collaboration, Crafty Bastard Brewery’s Hawaiian BBQ Pale Ale is aged in PostModern’s American Single Malt Whiskey barrels. “We love the local brewing scene, and so pairing this whiskey release with the release of a great beer such as the Hawaiian BBQ Pale Ale from Crafty is a natural fit,” Webster said.

The other major news is that PostModern Spirits will soon be available in the Nashville area and throughout middle Tennessee, marking a turning point for the local distillery, as it becomes a regional brand. Ajax-Turner, a major distributor, will handle the chore staring in the first two weeks of April. Nashville is about to learn about the liquors that have been immediately embraced in Knoxville. It’s fun to consider Knoxville becoming known for its whiskey and other spirits, as Tennessee whiskey has not historically been associated with our end of the state.

The American Single Malt Whiskey will be available for $40 per bottle exclusively in the tasting room on the weekend following the release, and then will be available widely in local liquor stores starting March 27. Stanton says, their “goal is to produce gins, liqueurs, whiskies and other spirits to elevate beverages for the modern cocktail and whiskey enthusiast.” They seem to be off to a good start.