Turning a Dysfunctional Eyesore into a Critically Functional Work of Art 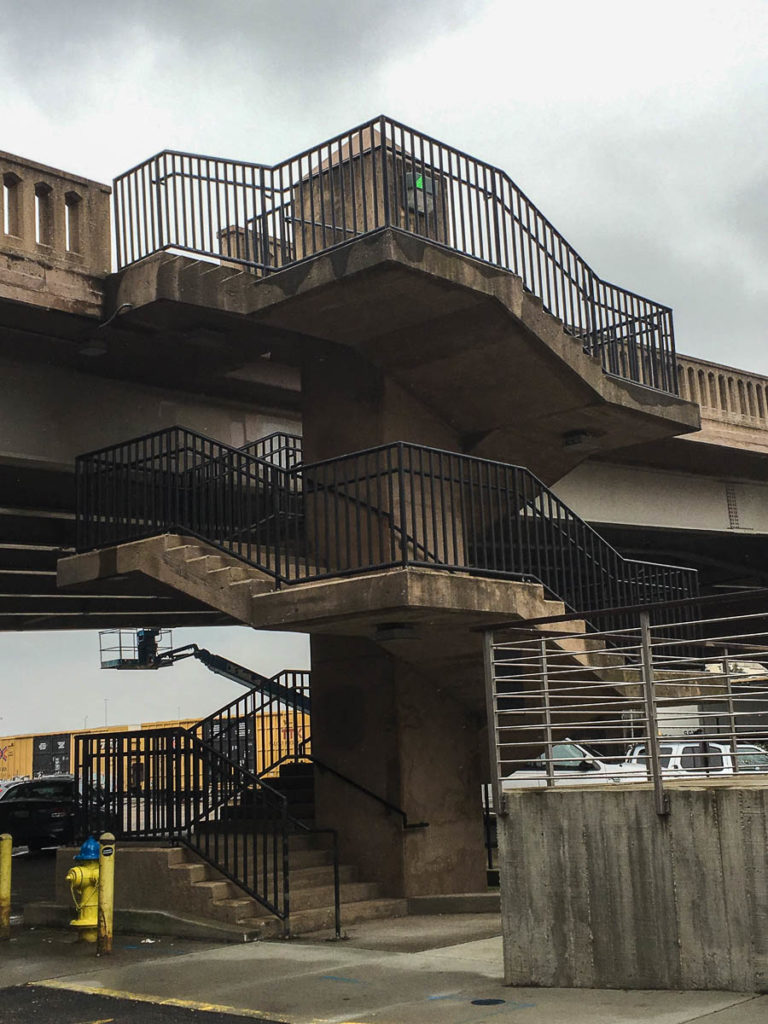 It’s a staircase I suspect most people who come downtown haven’t even noticed. It’s often dirty, smelly and it’s built just a bit different from most stairwells – it sort of spirals, but not quite. The location doesn’t inspire many people to use it – it leads from a spot most people don’t walk – the Gay Street Viaduct, to, well, beneath the viaduct, though that spot is changing rapidly with the new businesses in the Jackson Terminal Building.

So, why is it getting attention, now? Because it is about to become a critical connector from the 100 block down into the Old City. In fairly short order – this summer into fall seems likely – the ramps from each side of the Gay Street Viaduct on Jackson, both east and west of Gay Street, will be removed for repairs likely to take as long as a year.

Consider yourself on a First Friday night standing at the Emporium on the 100 block of Gay Street and desiring to carry the party to the Old City. The best known options will be ugly – to walk across the viaduct to Depot over to Central and around or, alternately, walk out to the Summit Hill side of the block and walk down the hill that way. The only good option will be the little staircase that could. And it will be ready for you.

The CBID (Central Business Improvement District) in conjunction with a host of partners is fast-tracking a major aesthetic and functional upgrade of the critical connector. Liza Zenni helped get quick approval for the concept through the Public Arts Committee. The city came on board, Robin Easter Design, with lead designer Erik Vass, developed the concept. Dollar and Ewers Architecture designed the lighting with help from Jack O’Hanlon of the O’Hanlon Group.

If you do know the stairway, you may have noticed that fencing now surrounds it, making it unusable for the duration of the improvements. The plan is to work quickly to add treads to the steps, re-coat the steps and landings with a non-slick surface, add lighting from top to bottom and apply Erik’s design to the steps and to the center of the structure.

Beyond simply an attractive mural, the design is intended to be interactive. Throughout the piece you’ll find Knoxville references, some obvious and others more subtle. The idea is to spotlight historical and contemporary people, attractions and qualities that make Knoxville the city of which we are all proud.

With nearly fifty such references embedded, the stairwell should be fascinating to consider. A brochure will list the references and challenge passersby to find them. A website will provide the connections. Famous people with Knoxville connections such as Hank Williams, Sr., Patricia Neal, Peyton Manning and Cal Johnson sit alongside Johnny Knoxville, the Body Farm (hint: the reference is a skull – so you have a start), White Lily Flour, the World’s Fair, Pat Summit, Alex Haley and Big John Tate.

The steps will match the mural in bright colors, but, for safety reasons on the stairwell, will not include the same design. It should be a fun eye-catcher that will generate interest even before the ramps are removed and it becomes essential. I’m most excited to see it from down the street at night, which should be spectacular.

For those who don’t see it here, there’s an event planned to let the wider world know about the stairwell while also helping with crowd control for a popular annual event schedule for April 21. Attracting thousands each year, Market Square is nearly impassable with the press of the crowds for the annual Chalkwalk. Planned for the same day this year will be a major sideshow: The Sidewalk Sideshow.

Described as “Whimsical, wondrous and wacky, the site says to prepare for, “jugglers, stilt walkers, giant puppets, unicyclists, musicians, marching bands, aerialists and more all along Gay Street and around the Old City…something around every corner.” And much of the pedestrian traffic will be directed over the little staircase that could. It will add to the festive nature of the day while spreading the crowds around the city and teaching the masses a new path to the Old City. Sponsors for the day include the Old City Association, CBID and City People. Watch for the new project to take shape very quickly in order to be ready for the big day. It’s just one of many changes and festive events happening in the city in the next weeks. It also represents what can be done, with a bit of creativity, to turn an urban liability into an attractive asset.