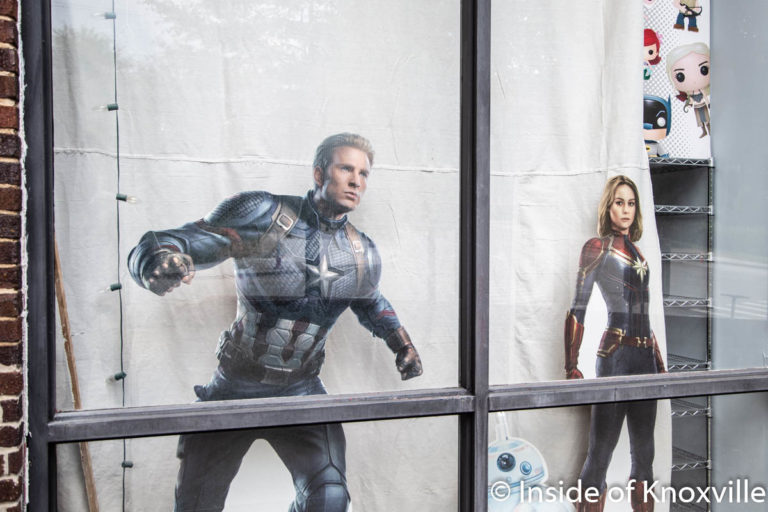 It may seem counter-intuitive for a business to move to a new location and expand during a global health emergency. The news may be filled with dire economic reports, but for people with vision, this is the time to take the leap with the move they’ve been waiting to make. Today we look at two businesses doing just that.

I first introduced readers to Mike Hermann with Tall Man Toys and Comics in June 2018 when he opened his shop at 609 North Gay Street. More recently, we checked in on Mike to see how the business was doing during the pandemic. As he said then, the business has done well during these months.

Mike entered the new year building cash to find a new location. When the pandemic hit, he opted not to apply for the relief funds as he felt there were others who would be more in need of the money. Tall Man has been operated for sometime as an online business with a brick and mortar presence and not the other way around. When the doors closed, he kept selling.

They were getting two pallets a week of new merchandise simply to keep up. He started a video series to cheer people up and promote the celebrities whose likenesses the store sells. He hired new people, including then out-of-work hairdressers to fill orders. At a time when all his competitors were closed, his business boomed.

Being temporarily closed did not shift his attention from the fact that he needed more space both for inventory and for customers. On weekends before the pandemic, he was overrun by customers who came from near and from as far away as hours. As the third largest Funko Shop in the southeast, the store was a large draw.

He began exploring spaces all over town looking for the right fit. One day as he passed the Candy Factory, he noticed a large vacant space and began digging to find the owners of the unlisted property. He found the crew at Draft Agency had purchased that floor of the building and would not be using the front space. It seemed a perfect fit.

He’s excited to be in a place that once made chocolate for children and others and now he will sell toys and comics for children and grown-ups in the same space. He’s increased his space from just over 800 square feet to about 2800 and he anticipates the store will be a regional destination once we move past the pandemic. He said his new stock room is about as large as his old store.

He’ll have comic books, action figures, a range of toys and he will now become the largest Funko dealer in the southeast. He anticipates opening at the beginning of next month. Keep up with the store on Facebook and Instagram and place orders on the website.

Lillian Ruth Bride has already moved into their new location. I first introduced you to the business as it moved into a second floor shop on Market Square in August of 2017. Owner Leslie Rosenbaum was excited to be downtown and looked forward to having a location where brides could both find a dress for their special day and enjoy the city. She said it would be destination, and not dependent on foot traffic.

She was right. The business grew so fast that she realized she would need more space. She said she loved the tucked away feel of the loft, but she was short of storage space and there was no room for an office. More of a concern, brides sometimes felt slightly crowded. The business has now moved to a lovely space in the newly renovated building at 102 West Summit Hill Drive.

Leslie says she started looking for a new space in January and was finalizing the lease when the pandemic struck. She was closed for the month of April and felt a brief uncertainty, but after some thought, decided to “take a leap of faith.” She wanted the business to continue to grow, as had always been the case, and realized to do so would mean needing more space.

The new space is almost double in size and features two bridal areas with separate dressing rooms, as well as ample space to display inventory. Largely operating by appointment, the store continues to not depend on foot-traffic, but the new space is significantly more visible.

She said people are still getting married and, while the number in attendance may be smaller, the brides still want to look beautiful. If anything, fewer guests reduces some expenses and allows more to spend on a dress! She said she is happy to have been able to find the additional space she needed and still remain in the downtown area.

You can spot the new shop by the bridal gown in the window, next to Old City Medspa, just around the corner from Olibea and across the street from Merchants of Beer. You can follow along with the business on Facebook, or Instagram and set appointments or learn more on their website.