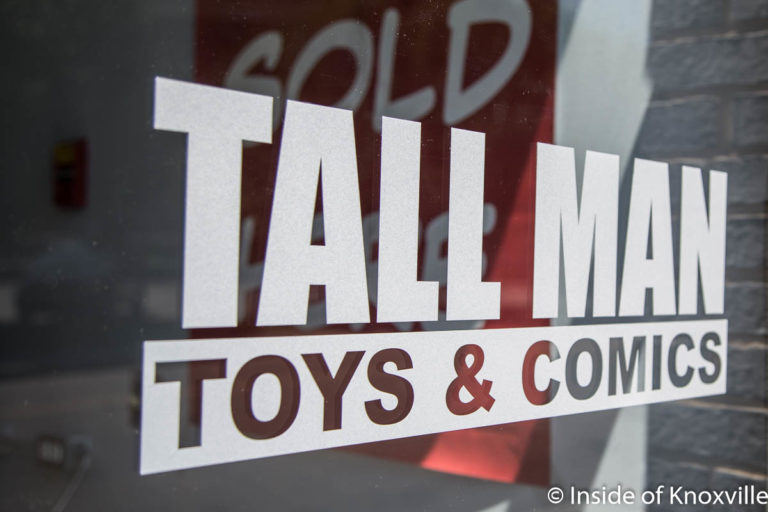 The development push out from downtown’s core to the north continues, with the soft opening this past weekend of Tall Man Toys and Comics. Located at 609 N. Gay, it is found in the Beaman Building, right next to Pop Weasel Emporium which opened almost two years ago. Owner Mike Hermann says he’d planned to open a retail spot, but didn’t expect the opportunity to come so soon. He’s happy it has.

Originally from Wisconsin, Mike moved to Knoxville with his family in 1996 when his parents took research positions at UT. He was a junior in High School and graduated from Halls with every intention of leaving town as soon as possible. But he grew to like the “small, big town. I felt like I fit in.” He started Pellissippi, then transferred to UT.

He’d always collected 80’s toys and when they came back, he started buying and selling. Pops! became popular and he started selling those out of a friend’s store. He went to work for Kroger and worked his first Fan Boy convention as a Kroger representative with a toy booth.

He also began supplying a some local comic book stores with his stock. He worked with Nirvana, Level Up, Mary Death Antics and the The Golden Age. When Ebay took off in 2005, he began dabbling in buying and selling there, mostly for fun. He’d buy a collection and sell the parts he’d already collected. New Krypton in Powell asked if he would supply Pops! and that got him started on that track.

He gradually expanded the shows he attends and they have been very successful. He met Ted DiBiase, the Million Dollar Man, and formed a friendship as he has with many celebrities at fan shows. He’s friends with Butch Patrick (Eddie Munster), for example. A number of them sign their Pops! for him and he, in turn, supplies them for shows.

He’s continued to work Ebay, but his Shopify store is where he does most of his business. His entire stock is online, meaning that walk-in business doesn’t necessarily drive the majority of his sales. Shows continue to be a core of his business and a recently spectacularly successful one (tens of thousands in sales) convinced him he needed to consolidate his collections, which were in his house and at storage units, to make his operation more efficient. He was really looking for a larger storage facility – and then he found this great opportunity thanks to Gina who alerted him to the opening.

He’s also involved in a local charitable group, Pops! for Patients, which has supplied local chronically ill children with nearly seven thousand of the toys. It was, in fact, a child who gave him the idea for the name of the business. At one of the regional shows, a child bought a toy from him with the child’s own money. Mike overheard the parents ask where he’d gotten that toy and the child replied he’d gotten it from the tall guy. Mike liked it and shifted it to Tall Man.

He’s already enjoying having a retail spot and loves his part of town. He saw the Stone Temple Pilots out for a walk one day recently and he loves the proximity to so much else that’s happening nearby, from the Mill and Mine to Public House and all around. He pointed out that he can walk to Yassin’s Falafel House in eight minutes. I told him he must be a fast walker.

The soft opening got a great response and he’s currently restocking shelves. Expect a grand opening in July, but in the meantime, he’s open for business Saturday from 10:00 AM to 7:00 PM and Sundays from Noon to 6:00 PM until Fanboy. In July he’ll add Thursdays and Fridays 12:00 Noon to 7:00 PM. You can also find the store on Facebook which has a direct link to the Shopify Store (or you can use this link). You’ll also find Tall Man Toys on Instagram and Twitter.