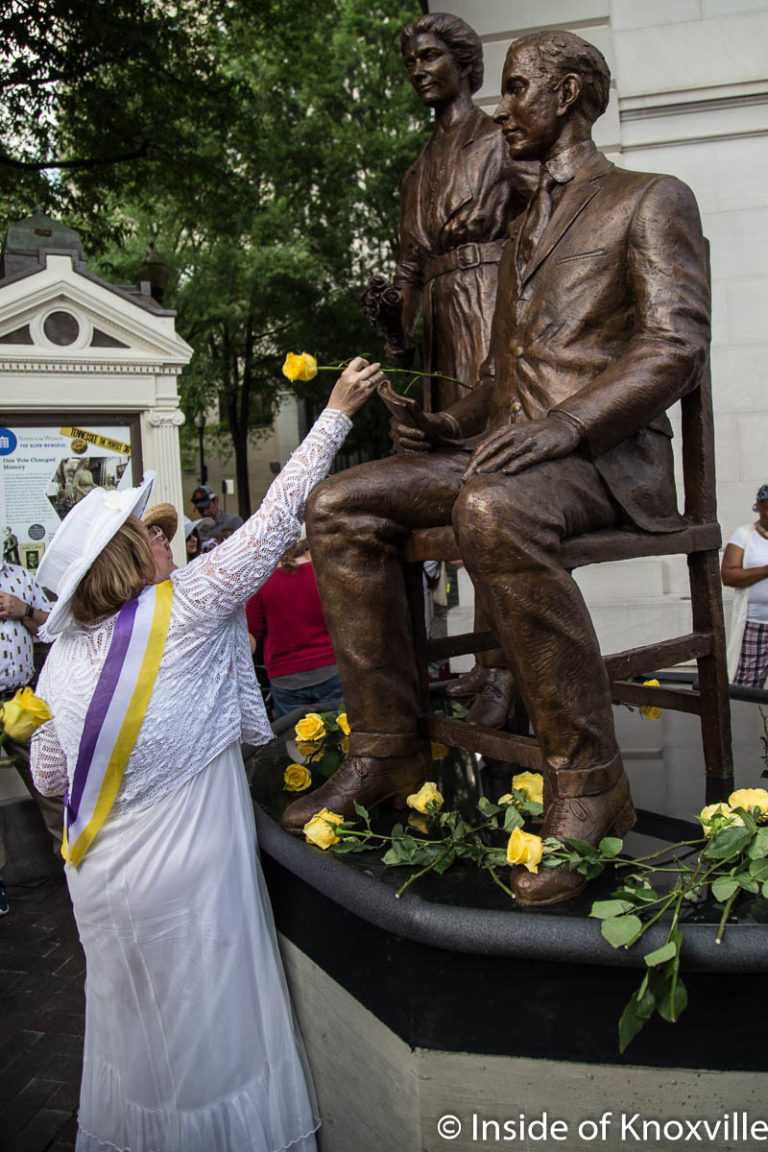 Saturday was a hot and humid day in the city, with temperatures hovering in the 90s by afternoon. It was a perfect setting for a suffrage march, rally and the unveiling of the latest sculpture in the city: The Burn Memorial. The memorial, which I wrote about only last October, seemed only a dream then, but has quickly become a reality.

The effort, spearheaded by the Suffrage Coalition and president of the board, Wanda Sobieski, was funded by sponsors lined up by the group. Large sponsors will have plaques added to the site of the sculpture and $100 donors will have their names on bricks surrounding the sculpture. The sculptor responsible for the work, Alan LeQuire, also produced the suffrage statue on Market Square.

I was able to slip down for a bit on Friday as the statue was lifted into place. After a few harrowing moments, the statue sailed through the air like it was meant to fly. Harry and Febb seemed to study their new home with interest from high above Market Street.

Urban Boy and Urban Girl enjoyed telling the story of seeing a flying sculpture on a downtown street and the occasion offered a great opportunity to discuss with Urban Girl the story behind the memorial. If you don’t know the entire story, please go back and read the previous article. It really is high drama and it puts Tennessee at the cutting edge of tremendous social change for the better.

Saturday afternoon’s festivities began with a suffrage parade from Main Street to the Market Square stage. The girl scouts presented the colors for the crowd to pledge allegiance to the flag. Wanda Sobieski and Mayor Rogero addressed the crowd and Candace Corrigan performed songs she’d written for the unveiling of each of our suffrage statues.

From there, the crowd moved to the much anticipated unveiling. After brief remarks, the unveiling commenced, hitting a literal snag atop Febb Burn’s head. Help came in the form of Ferrell Garramone, who stepped up from the crowd to free the covering. Ferrell was present representing the sculptor who was in France and unable to attend. She was his assistant for the project and noted that she had sculpted the intricate flowers held by Febb in the statue.

After the unveiling, it was clear the crowd did not wish to have the moment end. Various groups posed for photographs. Mayor Rogero and a number of elected officials and candidates took turns posing, with many placing the yellow flower, symbolic of the movement, on the base of the statue. It reminded me of the many women who did the same at the other suffrage statue on the night of the 2016 presidential election.

Robert Large, age 95 from Niota was in attendance. His mother, Mary Snyder Large, who lived to be 108, was a part of the movement. (Thanks to Georgiana Vines for this info!) Members of the Burn family – grandchildren of Harry – were also present and seemed very proud.

My favorite moment came as Sue Raskin Groves and I chatted and turned to leave. A group of young men on bicycles pulled up and expressed curiosity about the event and the new memorial and Sue gave them the full story – and they listened, seeming to be genuinely interested. It was a hopeful moment to end the day.

If you haven’t already, please take a stroll the memorial and take a look at an excellent addition to Knoxville’s somewhat surprising collection of sculptures honoring writers, suffragists, Native Americans, pianists and more. It’s located at the corner of Market and Clinch just behind the East Tennessee History Center.