Hen+Hoc Deli and Butcher Opens Today in the Old City 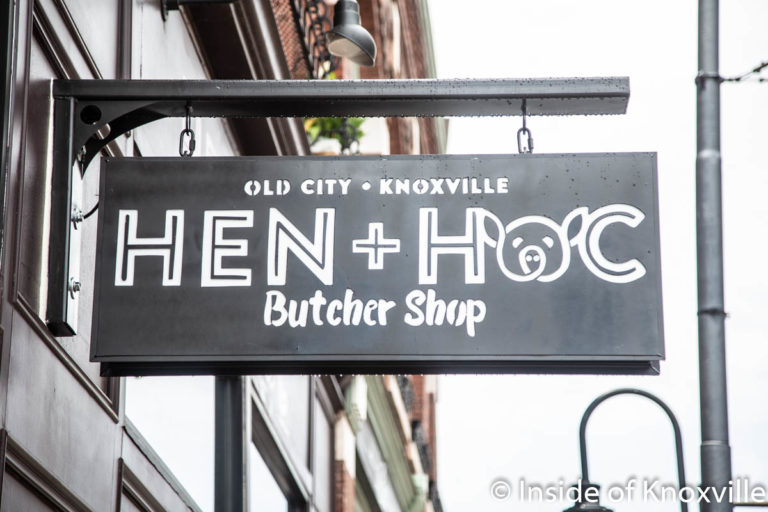 It’s been a long time coming. Opening a new business in the middle of a pandemic might seem less than ideal. But Chef Jeffrey DeAlejandro says that he and partner Chef Jon Newman have taken the extra time to learn what people might want from a downtown deli and butcher shop. And at long last, it is ready. The shop opens at 11:00 AM today and has the fine, fresh meats ready to share.

The last months have been a challenge, as you might expect. Opening a business is difficult under the best circumstances and these could hardly be mistaken for that. It takes a village and part of that village for Hen Hoc has been Thomas Boyd who owns the building. Jeffrey said that Thomas “has been exceptional. Without his patience, this would not have worked.

Jeffrey originally thought he’d open the new location of Oli Bea and then, within a couple of months, open Hen Hoc. The new Oli Bea locations opened on February 28 and Coronavirus opened immediately thereafter in March. In addition to operating in a new space, Jeffrey had to navigate the shifting requirements and guidance related to the pandemic, while trying to keep his staff safe and the business afloat.

He’s done some catering during the last few months and has had the restaurant open for pickup and carryout and has operated with limited seating. He closed for a week recently because customers were so abusive toward his staff regarding wearing a mask into the restaurant and when they moved about. Here’s a sample of a recent comment from the Facebook page, “When you stop complying with tyrants, I might stop by. If no business that required a mask got any business, I bet they’d stop requiring masks before they went out of business.”

The staff was shaken on a Saturday, they pushed through Sunday and “it was worse.” He had one customer throw a mask in the face of a server. He gave the staff a week off and they came back with new signage and other ways to enforce the rule and it has been better. It was the last kind of thing a battered small business owner needs to deal with at this time.

The good news is that the new shop is ready to fill a need in the downtown area. His beef had longer to age and he’s gotten a good sense of what he thinks people want and he’s ready to go. One major meat of interest has been seafood and he’s been able to contract with vendors in Charleston and on the Alabama Gulf Coast and they will deliver seafood as soon as it is caught. What he’ll have depends on what they catch, but he should have shrimp and one or more types of fish at any given time.

The beef, pork and chicken are ready to go, as well as wide range of sausages and deli meats. As the shop gets a few days under its belt, you will find an increasing number of items. Starting today, pre-made sandwiches and salads will be in the cooler, along with cheeses and deli meats, eggs, butter, cream, a few vegetables, such as onions and corn.

You’ll find peaches, lemons, limes, pate‘ and hummus. The sandwiches will be made with locally made bread, high end meats and cheese. They will have small meals they call “adultables,” rather than lunchables. He’ll likely add charcuterie plates to go as he gets underway.

For the cuts of meat, they’ll have steaks, short-ribs, pork loins, pork chops and whole chickens from which they will cut the pieces you prefer. The available meat in coming weeks will begin to reflect what customers want. He’s already gotten requests for oxtail, for example, and he’ll soon have some in the freezer, along with stocks, bones and rendered fats. There will be excellent brats and hotdogs.

He’ll also be building a selection of herbs and spices, sauces and small staples that people living downtown might like to have as an option. He’ll have meal, grains and potatoes. As a nod to the kids, he’ll have Annie’s Macaroni and Cheese. He even plans to keep a little toilet paper and paper towels. It’s not a grocery store, but he’ll be able to cover some basic needs in a pinch. He’s even planning to share recipes.

Moving forward, he and Jon will be able to have an order ready if you want to order a large amount of meat in advance. There will also be an option of ordering online via Toast and pick up at the door, if you prefer. For in-store service, they will monitor how many people enter, masks will be required and tape will be on the floor showing proper distancing.

There will be a few limited seats, but those will come after we’ve made our way through the pandemic. He also plans to expand his catering once the virus is under control.

Jeffrey says he misses hospitality just like he misses hugs and greeting friends. The place will reflect his personality and he can’t wait to be the guy that takes care of people in the butcher shop. He wants to get you your favorite cut of meat and he wants to give you ideas for meals and preparation of the meats, as well as maybe introduce you to some you’d not encountered before.

The shop opens its doors for the first time, today, at 11 am. Hours to start will be 11 to 6 Tuesday through Saturday and 10 to 3 on Sunday. Hour expansions will be considered as he learns the flow of the business. He may well open on weekend nights to serve sandwiches. You can find (and follow and like) the new business on Facebook, Instagram, Twitter and on their webpage.

He says it’s just cool to see it come together and he’s ready to take care of you. The hugs will have to wait a bit.