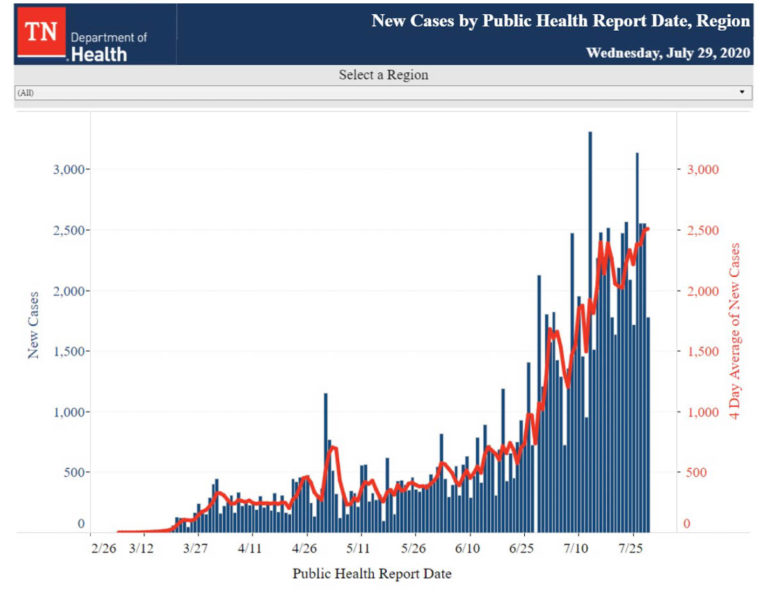 Earlier this morning I heard the sound of rain on the roof. We rarely hear it because there is a condo above ours. It made me think of sounds I miss. I miss the sounds of rollers on the bottom of my suitcase as I pull it along to the next destination. I miss the clatter of china and utensils and the murmur of quiet conversation at a nice restaurant. I miss the sound of a great guitar solo while surrounded by frenetically dancing concert-goers. What sounds do you miss?

Since the beginning of the pandemic, 17,287,630 people have been diagnosed with COVID-19 across the world. 672,159 of these people have died of the illness. Yesterday, 290,674 additional people were diagnosed and 7,023 deaths were reported. About 10.8 million people have recovered and a bit over 5.8 million cases remain active.

Yesterday’s increase in cases was the largest single-day increase since the beginning of the pandemic, displacing the record set six days earlier. The seven-day moving average increased by about 1,500 to 258,771 new cases a day. The rate of increase in the last five days has been slower than the weeks previous to that, which may offer some encouragement.

The 7,023 reported deaths yesterday is the second highest number of deaths across the world in the last three months, second to the same day of the week a week earlier. For that reason, the seven day moving average dropped by 22 to 5,651. The average has declined for two days consecutively so, perhaps we’re seeing a leveling off. The countries fueling international deaths yesterday were Brazil (1,554), the U.S. (1,485), Mexico (854) and India (779). No other country reported 400 or more. A total of ten countries reported 100 or more, with half of them found in Central and South America.

The four countries at the top of the list continue to be responsible for about 2/3 of the cases in the world: Brazil (70,869), the U.S. (66,921), India (52,249), and South Africa (11,362). That said, twenty-seven different countries reported over 1,000 new cases, a new high, if my memory serves. Ten of the countries are in Central and South America, with the others scattered around the globe. Spain, France and Israel have each seen resurgences and are now back into this top group for new cases.

Brazil’s First Lady and a fifth member of the president’s cabinet have tested positive for COVID-19. The EU has revised their travel list and we are still barred from taking a European vacation. WHO is expressing concern over the easing of restrictions in Africa as cases have doubled there in the last month to about a million. Norway and Iceland are reporting spikes in cases and are imposing new restrictions.

Since the beginning of the pandemic, the United States has reported 4,593,625 cases of COVID-19 and attributed 154,399 deaths to the illness. Yesterday, 66,921 new cases were reported, along with 1,485 additional deaths. About 2.3 million people have recovered and about 2.2 million people have active cases. The average daily cases continue to show a slow decline, with the current average of 66,683 new cases about 2,500 below the peak of a few days ago.

Deaths, however, continue to rise. Yesterday’s 1,485 deaths is the highest single-day total since May 27. The average is currently 1,022, over 1,000 for the first time since June 3. Florida has hit a new high in deaths three consecutive days. States pacing the country in deaths yesterday were Texas (313), Florida (216), and California (195).

Former presidential candidate and the head of Black Voices for Trump has died of COVID-19. Fox News reports that he attended President Trump’s rally in Tulsa and did not wear a mask. He was hospitalized less than two weeks later. Schools in Washington, D.C. have announced they will have virtual education for all students for the first semester.

On Fox News today, Dr. Birx reiterated that hydroxychloroquine has not been shown to be an effective treatment for COVID-19 and expressed confidence that Remdesivir does so. As the U.S. economy has shrunk at the fastest pace in history as Republicans struggle to agree on the next relief package. President Trump raised the possibility that the presidential election might need to be delayed.

110 additional Tennesseans were hospitalized with the illness bringing the total hospitalized since the beginning of the pandemic to 4,482. The number currently hospitalized grew to 1,161 COVID-19 patients, with 332 cases pending. About 19.6 K tests were reported, bringing that total to about 1.45 million.

The four-day moving average of new cases is 2,507, the new high mark for the pandemic. The trend in deaths is also upward, now sitting at a seven-day moving average of 19 per day, more than twice what it was at the beginning of the month. The positive test rate is 8.5%, below its high earlier this week of 9.2%, but well above the 5% goal. The number of Tennessee children being diagnosed with the illness has increased by about 33% in the last ten days, which is in line with state numbers for adults.

Locally, the Knox County Health Department is reporting 108 new cases, bringing the local total since the beginning of the pandemic to 3,641. It marks the ninth consecutive day new cases have topped 100, a mark only reached three times prior to that and all since July 14. That said, today’s number is the lowest of the nine days.

1,643 people have recovered and the number of active cases sits at 1,967, the same as yesterday. There have been 190 Knox County residents hospitalized with the illness at some point and there are currently 39 receiving treatment there. There are 119 probable cases, which marks a substantial drop from yesterday and previous days.

Four additional deaths were reported today, all in the 75+ age group. There were five COVID-19 deaths from March through June. There have been 26 reported in July.

In local news, the Knox County Board of Health ordered bars closed starting Sunday night. The move was opposed by Mayor Jacobs. An Oak Ridge Schools employee at Jefferson Middle School in Oak Ridge tested positive for COVID-19 on Tuesday and another employee who splits time between there and Oak Ridge High School tested positive on Wednesday. Half the students who are doing in-person education reported today. Two doctors are behind the lawsuit mentioned in last night’s Board of Health meeting. Their suit alleges that faulty data was used to support a mask mandate.