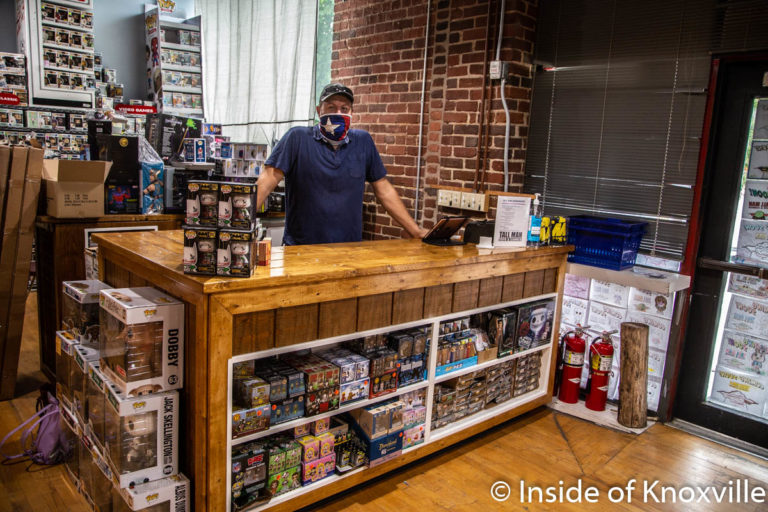 Tall Man Toys and Comics is nearing the finish line at their new location at 1060 Worlds Fair Park Drive. Owner Mike Hermann expects the store to open next week to in-store customer traffic, though they continue to operate online sales and curbside pickup of items. Just over two years ago, Mike opened the first brick-and-mortar location at 609 North Gay Street. He’s out-grown the location, and last month announced the move to the Candy Factory Building beside the Knoxville Museum of Art.

The check-out counter was built by Ron Broyles, better know as an urban mountaineer who reached fame with climbs across the country, including in Knoxville. You’ll also find 14 tall racks lining the store, filled with Funko Pops. The previous store held just 8 racks. He’s also added glass racks and now has about fifteen times the number of comic books he’d maintained in the previous store.

Vision Construction is responsible for the interior work and they’ve encountered some surprises that made for a bit of a delayed opening. Due to the size of the store, codes require a restroom be added. As that construction proceeded, crews found an old chimney which had not been included in building drawings of the 104-year-old building. That had to be addressed due to fire codes and so, the delay was on. They are also having to move a doorway to accommodate the appropriate slope for handicap accessibility.

People are stopping in even though the store isn’t opened and he’s been surprised at the amount of foot-traffic he’s had, though the store is not dependent on that. Most sales come online and the in-store sales are largely generated by people who’ve found them online and want to visit – often from hours away from the city.

He’s also starting to build stories about the new space as he has interesting encounters with skateboarders who like the front of the building, and he made one of his first sales at the new space to Mayor Kincannon. When Ruth Bader Ginsburg died, Mike had one of her Funko Pops in stock. He pulled it, as is his custom, out of respect. He typically won’t sell a figure for six months after someone has died. But then he thought Mayor Kincannon might appreciate it, called and offered it, and she came by and made the purchase.

He said that both mayors have been by and have expressed support for his efforts and appreciation for his work. Community Empowerment Director Charles Lomax happened by on a walk and came in and talked for a spell, expressing his support.

In addition to the expanded collections of comic books and Funko Pops, your’ll find other kinds of figures, graphic novels, board games and more. He’s not only expanded his collection of comic books, action figures, and toys, he’s become the largest Funko dealer in the southeast. He anticipates opening next week. Keep up with the store on Facebook and Instagram and place orders on the website.