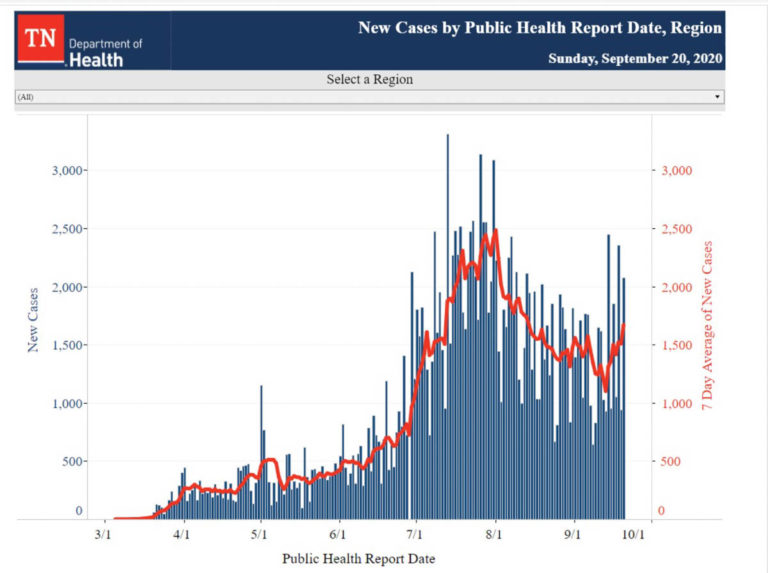 Welcome to the week in which we officially welcome Autumn. Cool air slipped in early and S.E.C. football seems dangerously close to actually happening after months of guesses and second guesses. It could almost seem normal if the world and the country wasn’t in such turmoil. We have no choice but to grieve for the pain in the world, the death, disease, inequity, political divides and more. In the moments when you can, embrace the coolness of the Autumn air, the soon turning leaves and all that goes with the grand pageantry of the turning of a season. Know that we will heal and may we all do our part to help us do so.

Yesterday, just over 249,000 new cases were reported along with about 3,900 deaths (Notably, Spain appears to have stopped reporting on the weekends.). The number of cases is up about 5,000 from the same day the previous week, with the number of deaths on that day about the same. The seven-day average of new cases is currently just under 284,000 cases per day, near its peak. The average of daily cases is about 29,000 per day higher than it was last week. Three weeks ago, the world experienced its first day of adding over 300,000 new cases. Two weeks ago there were two days above that number. Last week saw three consecutive days above 300,000 new cases.

With a number of ups and downs, deaths generally continue to track downward. That said, deaths are currently averaging just over 5,200 per day, compared with 5,100 a week ago and 5,300 two weeks earlier. There were just under 3,900 deaths yesterday, compared to closer to 4,000 the same day a week earlier. The four countries with reporting the most deaths yesterday remain the same as a week earlier, with a slight reshuffling: India (1,135), Mexico (455), Brazil (330) and the U.S. (294).

Reflecting the increasing overall numbers of cases and the wide nature of the spread, a growing number of countries are reporting 1,000 or more cases each day. Yesterday, 31 different countries reached that mark yesterday, as compared to 28 on the same day a week ago. Where last week there were three countries reporting over 10,000 on Sunday, there were four yesterday, with the top three remaining in the same order: India (87,382), the U.S. (33,344), Brazil (16,282) and France (10,569).

India broke its own single-country, single-day world record this past week, with 97,859 cases reported on September 16. France broke its single-day pandemic high with 13,498 cases on September 19. Its high in the first wave to hit the country was just over half that many (7,578) on March 31. It’s average daily deaths have gone from single digits in early August to its current 53 deaths per day.

The European Union, once more has become the most represented continent in the countries with the most cases. Eleven of those top 31 are from Europe (It would have been 12 if Spain had reported. It has recently reported multiple days over 10,000.), while eight are from Latin America. Senior medical officials in Britain are predicting exponentially rising cases in coming weeks (50,000 a day) and a surge in deaths if the country doesn’t act quickly to stop an emerging second wave. Officials in Madrid have ordered a partial lockdown.

Just over 33,300 new cases and 294 deaths were reported yesterday, reflecting about a 2,200 increase in cases and about 100 fewer deaths than the same day the previous week. Trends for new cases, after a nearly two month decline, reversed last week, with the average new cases rising yesterday to roughly 41,300 cases per day. A week earlier, that number was about 35,400 per day. The seven-day moving average for deaths is 782 per day compared to 753 a week earlier, though there was a spike between the two.

The per capita state comparisons for cases and deaths have changed over the course of the last two weeks. Eight of the top ten states for highest per capita case numbers since the beginning of the pandemic are now from the southeast. Notably, Tennessee has moved from the ninth highest to the seventh highest, Arkansas has moved into the top ten and New York has dropped out.

The biggest national COVID-related story in the U.S. in the past week has been related to the CDC. As previously reported, suspicions were raised four weeks ago when the CDC surprised scientists and medical professionals by dropped its recommendation that asymptomatic people who had been exposed should be tested. Four days ago, those suspicions were confirmed when reports surfaced the Department of Health and Human Services had changed the recommendations on the CDC website over their objections. After that confirmation, the CDC reversed its stance back to the original recommendation. As part of the latest revisions, the CDC now says the virus may be spread through simply through proximity to the breathing of someone who is positive, whereas before it said, coughing, sneezing or talking was likely required.

Yesterday, the state of Tennessee reported 2,075 new cases and 2 additional deaths. The pandemic totals for each are now 177,394 confirmed cases, 2,218 confirmed deaths and 6,120 probable cases. The seven-day average for new cases is now 1,670 per day and for deaths is 20 per day after recently cresting at 33 per day. 165.8 thousand are counted as inactive and just over 9,300 Tennesseans are currently ill with the virus.

COVID-positive hospitalizations continue to decline. As of yesterday, state-wide hospitalization numbers sit at 692 (from the state chart, as the front page differs and seems less accurate). A week ago, I reported the number as 703, though the state has retroactively revised that figure to 793, presumably by adding those that were pending. Current COVID-positive Tennesseans are also represented in 250 ICU patients and 126 ventilator patients. The number of pending cases also continues to drop and is now at 96.

As always, it’s good to look at testing rates and case increase together and the charts above show daily jumps up and down in case numbers and in tests reported for each day. The tests reported for yesterday (this is when results return, not when tests are given), surged to just over 39,900, the fourth highest daily total during the entire pandemic. The total reflected about a 75% jump from the day before. Cases jumped over 100% from the first day to the second: 942 – 2075.

The above testing information simply indicates that test reporting doesn’t flow evenly from day-to-day and, so, less should made of daily numbers and more of trends in , both testing and cases. Cases trended upward for the last week with the seven day average moving from 1,100 to 1,670, reflecting increased testing. The best news is that Johns Hopkins is reporting a declining trend in positive test results rates to the current 5.5%.

The Knox County Health Department is reporting 103 new cases today and no additional deaths. Numbers for Saturday and Sunday were 164 new cases and 75 new cases, with two additional deaths following the three reported on Friday. One of the deaths was in the 45 – 64 age group and one was in the 75+ age group. A total of 73 deaths due to COVID-19 have now been reported.

There are 1834 active cases and 7,699 inactive cases. 339 COVID-19 postive Knox County residents have been hospitalized at some point and there are currently 31 who are hospitalized. There are 380 probable cases, a number which, oddly, has not gone down since July.

The biggest news in the county continues to center around the Knox County Board of Health. In an article published today, The Compass did an excellent job detailing the various moving parts in opposition to the Board of Health’s recent mandates.

Further complicating the local picture, Mayor Jacobs narrated an incendiary video last week (released on FB in a group which is either gone or no longer public) which seemed to attack the Board of Health and paired that with images from violent protests in other cities, warning that we “could be next.” He has acknowledged co-writing the script. The video is either no longer available or has been made private.

Both Biggs and Mayor Jacobs have also thanked the Board of Health for their work and asked that they not be attacked, while seemingly fanning the flames. It will be interesting in the Wednesday night meeting to see if anyone on the board is willing to openly challenge the Mayor for putting out the video in the current environment.

The University of Tennessee News:

As of this morning, the University of Tennessee is reporting 338 active cases of COVID-19 on campus, down dramatically from a high of 680 just one week earlier. Of those, 15 are staff members and 323 are students. 1,026 have recovered. There are 1,305 students and staff in isolation or quarantine. Of these, 528 are non-residential students, 680 are residential students and 97 are staff members. No additional clusters have been identified.

As of Friday afternoon, the Knox County Schools reported 32 active cases, including 9 staff and 23 students. 212 are reported to have recovered and 816 remained in quarantine or isolation. In isolation, as of Friday afternoon, were 753 students and 63 staff. Active case numbers are significantly improved over the same day a week earlier, when there were 55 active cases. The number isolated or in quarantine is also down, though more modestly, from 863.

The benchmark for custodial staff remains red, while the benchmark for substitutes has returned to red. Also since Friday, Halls High School has been closed to in-person learning for at least ten days. A second Halls football game has been canceled due to the number of football players in quarantine.