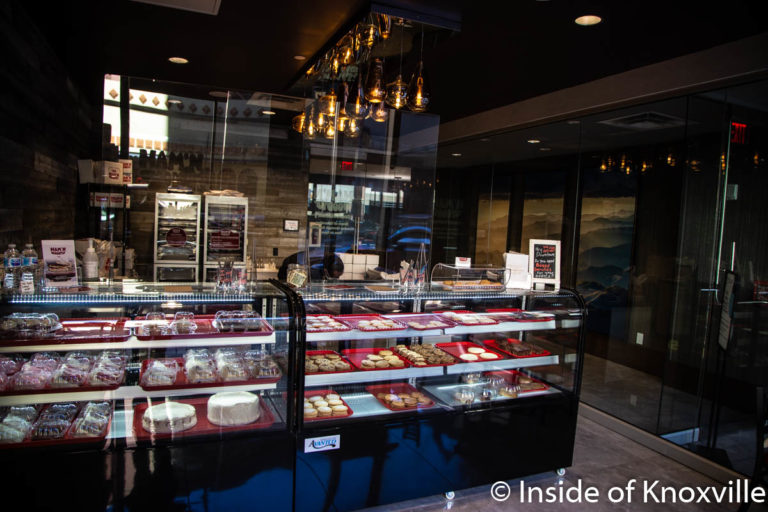 Knoxville has another great local business tucked around the perimeter of the Embassy Suites. With the addition of Ham’n Goodys, which opened last week, the hotel now is host to Knox Mason, K Brew, Top Golf, CJ’s Tacos, Wake Foot Sanctuary and Spa, as well as the new confection store. It’s an impressive lineup in spaces which could have simply been a part of the hotel, and now it’s even better.

The space is in a bright corner of the building adjacent to Krutch Park. It sparkles like the rest of the hotel lobby, with marble floors, large windows and modern, unique lighting. It’s a small space with a couple of tables and a display case showing the confections.

They do not sell coffee, as that is on the other side of the wall at KBrew. You can buy your confection and go next door to the coffee shop. Seating there is available in the lobby, as well as in KBrew. There is an entry and exit directly into the hotel, as well as off Gay Street.

The downtown location is a confectionery at this time, but there are hopes to expand into the “ham” part of the name in coming months (as well as their chicken salad and more). For now you’ll find their famous lemon glaze cookies and a list of other cookies. They have tea cakes, brownies and slices of several kinds of cake on any given day. Also available are whole cakes.

Dale Harold is the current owner of the Knoxville restaurant group. Founded in 1978 by Leroy and Emily Shoemaker, the business was subsequently purchased by Dale Harold in 2016. The original location in Bearden moved to Northshore, where it remains. A Cedar Bluff location was opened next and the downtown location is the newest. The business also operates two food trucks.

When you stop by, you’ll likely see Lisa Lawson, manager of the downtown location or Varnell Been, Jr. who was a warm host when I stopped by. He’s previously worked at the Tennessean, where he supervised the Drawing Room, and the Holiday Inn before that. Furloughed from the Tennessean, due tot he pandemic, he’s excited to bring his brand of personal hospitality to the business.