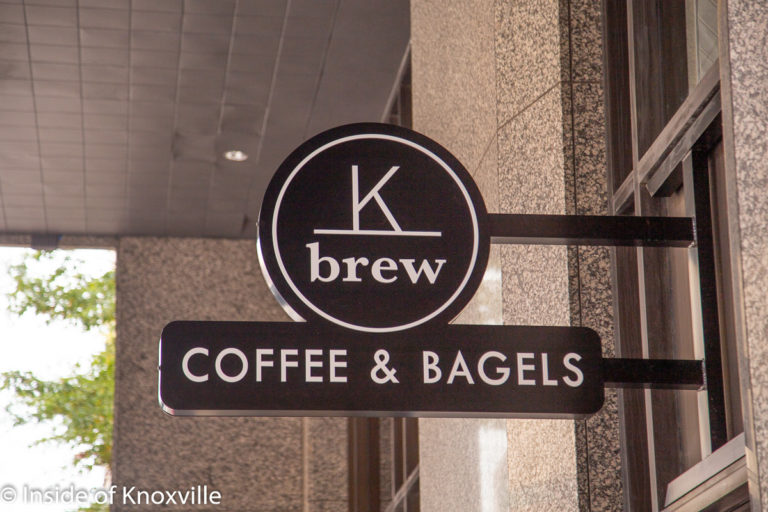 In addition to the opening of the Embassy Suites at 507 South Gay Street last Thursday, a number of ancillary businesses opened at the same address. Alpesh Patel, Embassy Suites owner and developer, was very deliberate in bringing local or unique businesses to the hotel, making the prime downtown corner an attraction for locals as well as travelers.

Last week I previewed the new location of Knox Mason, which is situated above the lobby entrance. Today I’ll look at the latest downtown venture for locally owned K Brew Coffee, which you’ll find to the left of the lobby as you enter.

I met with Pierce LaMacchia, co-owner of K Brew with his brother Michael. Originally located in a very small space at 1328 North Broadway, which opened in 2013, the brothers settled into their permanent flagship location at 1138 North Broadway in 2015. The coffee and bagel shop has become an institution in the area. Earlier this year, the brothers opened a location at 7822 Kingston Pike. With the new downtown location, they will grow to over fifty employees.

This is the second venture for K Brew in downtown. The brothers previously tried a small location in the Federal Courthouse and found it wasn’t a good fit. That spot was successfully taken over by Matt Robbins for Matt Robb’s Biscuits in April 2018. Pierce said the brothers always intended to have a location in the heart of downtown, but until Alpesh approached them, they had not found the right fit. Initially uncertain about the suitability of a hotel lobby, Alpesh’s vision won them over.

The splendid new location features bar seating facing Gay Street, four tables for two, and seating throughout the lobby. The lighting is intriguing, and a beautiful bar is set for service. Customers may also purchase t-shirts, cups, and other items, as well as bags of coffee beans for home brewing.

What you’ll find inside the new location is the full menu you’ve come to expect from K Brew’s other locations. It all starts with the coffee, and you’ll find their same high-quality brew at the new location, as well as espresso and specialty drinks. A rotating mix of their latest creations will also be featured.

The coffee shop added bagels along the way. Their fresh bagels, which have gotten great reviews, will be freshly made and delivered to the new location each morning. They have a wide range of house-made spreads available and they serve breakfast sandwiches with eggs and cheese, with meat and avocado options for dressing them up. Salmon Lox are also on the menu for those who enjoy a bagel and lox.

Pierce said the downtown location is very important to their business vision. “Michael and I love everything downtown and knew we wanted to return. We’re happy to be paired with Knox Mason and the Kana Group and Embassy Suites. We loved the lobby with its high-end, big city feel.”

He said their excitement grew as they began to understand the concept more fully and what the project means for downtown. Ultimately, he said, they began to feel honored to be involved. He said the staff has been great to work with, and they look forward to a long, happy relationship.