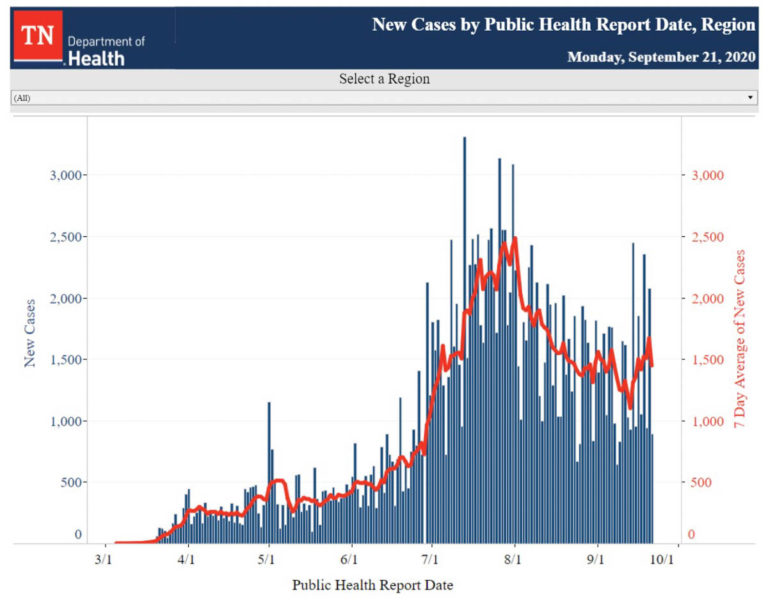 I’m thankful for my downtown neighborhood during the pandemic. It’s a great place to walk and enjoy the crisp air. The density and the fact that we’re moving around on foot ensures that there will be (distanced and masked) conversations on the street with people we cherish. Clearly, for now, it’s not like it was before (muffled): “How are you?” “Well, you know, about like everybody.” Still, there is crisp air, beautiful buildings and friends. That’s a lot to like. Happy fall, y’all.

The state of Tennessee reported an additional 895 cases of COVID-19 yesterday, and 15 deaths from the illness. Since the beginning of the pandemic, 178,190 Tennesseans have acquired the virus and 2,233 have died. An additional 6,219 cases are counted as probable.

As you would guess from the dramatic drop in cases from the previous day, tests being reported for the day dropped dramatically, as well. The state reported results for about 12.2 thousand tests yesterday, after reporting 39.9 the day before. The erratic daily returns on testing continue to make for a wild ride in case numbers at the state and county level. For the day, the state reported an 8.08% positive test result rate, while Johns Hopkins has the seven day average at 5.4%.

The Knox County Health department reported 59 new cases today, down from 103 yesterday, and continuing to follow the pattern of lows and highs seen in state reporting of cases and testing. Active cases dropped by four from yesterday, to 1830 and the number of probable cases is 407. 29 COVID-positive Knox County residents are currently hospitalized, down by two from yesterday.

Also worth noting locally, is that the Knox County Commission voted last night to add a community member to the board, though that person has not been named. They also kept open the possibility of voting to require the board to follow the dictates of the Tennessee Plan and not to be any more restrictive. It’s unclear to me if this is possible, as the governor has specifically said counties or Boards of Health could go beyond the plan as needed. The balcony of the large assembly room was packed with unmasked people demanding the restrictions be removed.

One other note: I asked the health department to help me understand why probable case counts never seem to drop. I was told that they are running counts and only go down if someone in the group gets a positive test, at which point they are counted as a case. If they are never tested, they simply stay in the total. My previous impression – that probable cases as a whole could become positive is not correct. The vast majority in that number are from months ago. It seems like an irrelevant number to me, in that case, unless we add it to the total and assume those are cases, even though never tested, which is truly likely. My head hurts.

Dr. Buchanan began by expressing gratitude to those planning to get their flu shot. She said there will be public flu clinics held by the health department in various communities. These are posted on the website. You can also make an appointment at the health department.

She discussed safely scheduling a play date for children. She suggested it be outside and older children should wear masks, wash hands and keep distance, if possible.

She discussed misinformation, saying the volume is staggering and it is imperative that people get their information from reputable sources and to not share information from other sources. She confirmed the above numbers.

She discussed probable cases and explained as above. She said the only time a probable case would be removed would be when they are tested positive.

University of Tennessee News (Including Briefing):

The University of Tennessee, after struggling early, seems to have found its footing as it battles COVID-19 infections on campus. While concern has been expressed that students may be avoiding testing in order to avoid quarantine or isolation, it seems likely there has been a real drop in cases, given the large numbers.

After peaking at 680 active cases on September 13, the trajectory has been steeply downward to the current total of 178, which includes 166 students and 12 staff members. 1,222 have recovered. The decline in quarantines and isolations has, as you would expect, been similarly steep. The school is currently reporting 849 in isolation or quarantine, including 393 non-residential students, 378 residential students and 78 employees. The 849 is down from a peak of 2,175 on September 13.

Also encouraging, Labor Day was two weeks ago and there is no apparent spike from students returning home. The fact that no additional clusters have been located is also encouraging.

Dr. Plowman started with the above data saying it looks encouraging. Dr. Gregg said it is encouraging to see the active cases dropping, though he said they continue to fear students are avoiding testing. He said the later interpretation is likely as those seeking testing are dropping across the state. The primary concern is for others as the asymptomatic, but infected students who have avoided testing are potentially spreading the illness as they are unlikely to isolate.

Contact tracers are reporting that contacts and cases are resulting from social circles and residential settings, not formal settings like classrooms. Isolation forms are still coming in slowly after positive tests or symptoms, which is a concern. They expect case numbers to increase as they begin systematic testing on campus and pool saliva testing and waste water testing.

Dr. Crawford spoke about the new systematic testing effort. In the first full week of testing the team did detect the virus in waste water. One complication with the strategy is that recently recovered patients continue to shed gastrointestinally. It will help monitor trends over time and to identify spikes. They also discussed an ongoing joint study with the University of Kentucky, with the goal of determining whether the 14 day quarantine period is necessary.

The Knox County Schools are reporting 45 active cases of COVID-19 among the school population, including 35 students and 10 staff members. While a large increase from the 32 reported the previous day, it is likely a reflection of cases accumulated over the weekend. The number remains below several recent days, about the same as a week ago, and well below the high of 58 on September 10.

212 are reported to have recovered and 975 are in quarantine or isolation, including 905 students and 70 staff members. The total given on Friday was 816, though that number appears to have been revised upward retroactively, to 1,008, which would be a new peak.