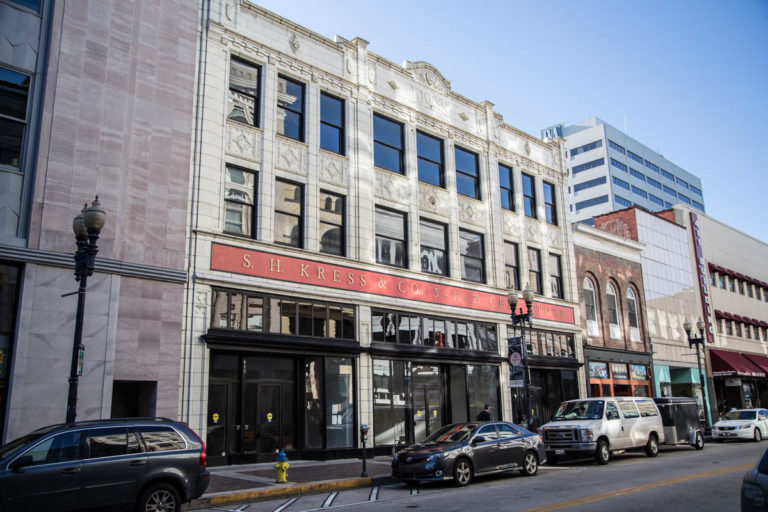 In recent months, I’ve been asked repeatedly about the Kress Building. Most recently, a year-and-a-half ago, I’d detailed Dave McFarland’s plans to bring Wild Wings Cafe to the space and that sign has been in the window since. But that wasn’t the first time plans were announced for the building. It wasn’t even the first time that Wild Wings had been planned for the space.

When I first wrote about the building, it had been purchased by Henry and Wallace and they’d announced development plans. For years it had been the quirky, if helpful, Jay’s Megamart. In the fall of 2015, I reported approved plans for Wild Wing Cafe, then canceled plans amid a dispute. In October of 2018, the story appeared to have come full circle, when Mr. McFarland, rather than leasing the space, returned to purchase the entire building.

It seemed the future of the 1925 building was set. Intending to open in the fall of 2019, construction seemed to never get started. There were a number of delays as Mr. McFarland replaced infrastructure and attempted to line up tenants. Construction began early this year and then halted after about three weeks, due to the pandemic.

Chad Turner and Will Sims from Oliver Smith Realty felt they had an interested buyer and connected Mr. McFarland with Thomas Boyd. Details were negotiated through the summer and the papers were signed yesterday to transfer ownership to Mr. Boyd.

I spoke to Thomas who said, “It’s a cool building and I want to find places that are in need of new life. I hope to bring a new spin to the block.” He said he his tenants are excited and are regional and local businesses. One tenant, Fat Tuesday, has been especially patient through all the delays and was transferred from Dave McFarland to Thomas in the transaction. Thomas said the building fit his goals of bringing residences and locally owned businesses to downtown.

Chad and Will gave me a tour of the building, along with the new vision, which is similar to the previous plans, but with some twists. Facing the building, the space to the right will be Fat Tuesday. The space allocated to them in the new plan is significantly larger, as the back half of that section was formerly to have been devoted to a kitchen for Wild Wing Cafe. It should allow them to expand their concept for the space.

The largest space on the main floor, previously set to be a Wild Wing Cafe, will be a restaurant and bar. The occupant hasn’t been announced, but it appears to be a “unique concept” featuring a Tennessee business. The space, about 4500 square feet, is a large one for downtown restaurants.

The basement is still in negotiation, but the second floor office space is just a bit of cleaning shy of being ready for tenants. The entire floor, including 7800 sq ft., may be taken by one company or the design allows for two or three companies to share the floor. Chad and Will said demand for office space has continued to be strong through the pandemic.

There’s a little room for flexibility on the third floor, but Thomas is intent on making it residential. Should an office tenant request a second floor, that might be considered, but residential development is a priority. The rooftop will feature an additional restaurant and bar with local ties. It will not be related to the other businesses in the building.

This time feels like the charm for the building. Sitting in the middle of the single block with the most businesses, it almost seems odd that someone hasn’t made it work before now. Construction should begin soon and announcements of new businesses should shortly follow.

If you have interest in discussing leasing any portion of the building that remains available, email Chad or Will for more information.