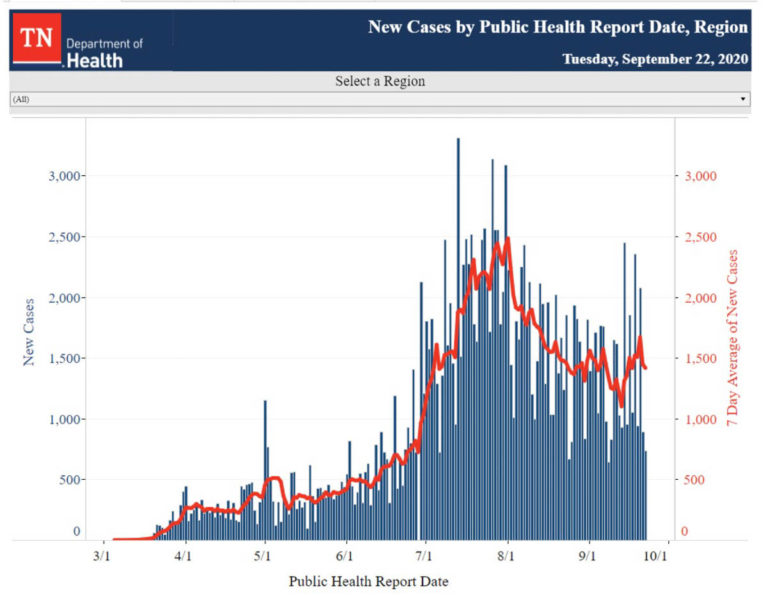 It’s Wednesday. That means we’re mid-week in game week for college football. How many games will get played? We’ll soon know. It’s also Knox County Board of Health meeting day and tonight promises to be fascinating as the pressure mounts on the board to get us out of this mess and leave us alone all at the same time. I’m assuming all the encouragement to apply to join the board was done out of respect and I appreciate that. At the same time, would you wish it on your worst enemy? They absolutely cannot win no matter what they do. I think I’ll do my best to keep this civic contribution moving along.

The state of Tennessee reported 739 new cases yesterday, bringing the total confirmed cases in the state to 178,759, with an additional 6,389 probable cases. 167,778 people have recovered, leaving 8,720 currently ill Tennesseans.

An additional 28 people died in the state yesterday, bringing that total to 2,261. Tennessee is averaging 20 deaths each day, down from 32 about a week ago, but up from 17 two weeks ago.

64 additional people were hospitalized to bring the pandemic total to 8,263. Current hospitalizations have increased for two consecutive days, the first time that has happened in almost two weeks, but the totals remain well below peaks of two months ago. Current numbers on COVID-positive Tennessee hospitalizations: 779 hospitalized, 260 in the ICU, 109 on ventilators.

Testing levels continue to dictate case numbers and to be erratic. After reporting on an impressive 40,039 tests on Sunday (Johns Hopkins numbers, which are slightly higher than the numbers reported by the state), Tennessee reported just over 12,000 on Monday and just under 12,000 on Tuesday. For the day, yesterday, the state reported a 7.55% positive test result rate, while Johns Hopkins has the state at a 5.6% average over the last seven days.

Tennessee garnered some early praise for its testing program, featured on NPR at one point for its efficacy. More recently, Dr. Birx has expressed concern at the drop in numbers of tests given in the state. Surveying testing from the beginning of the pandemic shows that Tennessee ranks 11th among the fifty states in total testing and 10th per capita. Two southeastern states outpace the state in total tests (Florida and Georgia) and one in per capita testing (Louisiana).

The Knox County Health Department reported 55 new cases today, bringing the total to 9,340 confirmed and 407 probable cases. 7,902 people are now considered recovered, their cases inactive. Hospitalizations increased to 33, but remains in a steady range. The total COVID-positive Knox County residents hospitalized at some point is now 345.

One additional death was reported today, once more in the older range of residents, bringing our total to 77 deaths. Of these, about 46% are at or over the age of 75 and 54% are under the age of 75.

The Board of Health meets tonight at 5:00 pm. “The meeting will be available to the public via Community Television (CTV) and by Internet at: WWW.CTVKNOX.ORG or the Knox County YouTube channel at: WWW.YOUTUBE.COM/KNOXCOUNTYTNor the Knox County livestream website at: STREAM.KNOXCOUNTYTN.GOV. It promises to be a lengthy and potentially contentious meeting.

The University of Tennessee continues to report dropping case numbers, with the current report indicating 132 active cases. The number includes 124 students and 8 employees. Just 10 days ago the total was 680. The hope is that these numbers reflect a student body that realized they would have to take better precautions to avoid the illness and that they have done so. The fear is they are simply avoiding testing. The surveillance testing program currently being instated by UT should help answer the question.

Also decline precipitously, as a result of dropping case numbers, is the number in isolation or quarantine. The number was as high as 2,175 on September 13 and is now 685, including 60 staff and 625 students. At the peak, there were 1,093 on-campus students who needed to be isolated, prompting the university to take extraordinary measures to move students and dedicate a dorm to the students. Just ten days after the peak, only 299 on-campus students are isolated or are in quarantine.

No additional clusters have been reported in the last two weeks. Football begins this weekend and the game, as well as activities surrounding it, becomes the latest test to the improving numbers.

The Knox County Schools are reporting 44 active cases, including 33 students and 11 staff members. The total is one fewer than yesterday, with two students dropping off and a staff member added. The number has remained remarkably stable, with 42 reported a week ago. The total has been in the 40s or 50s since September 1. 223 have recovered. The feared spike from Labor Day doesn’t appear to have materialized in the schools.

979 people connected with the schools are currently in quarantine or isolation. The number includes 908 students and 71 staff members. The number is up by four from yesterday, and is 71 higher than the number a week ago. This number has also been notably consistent, with somewhere between 800 and just over a thousand in isolation or quarantine since September 8.

Halls High School remains the only school currently closed to in-person learning. As has been the case, all metrics remain green, with the exception of custodial staff (yellow) and substitutes (red).