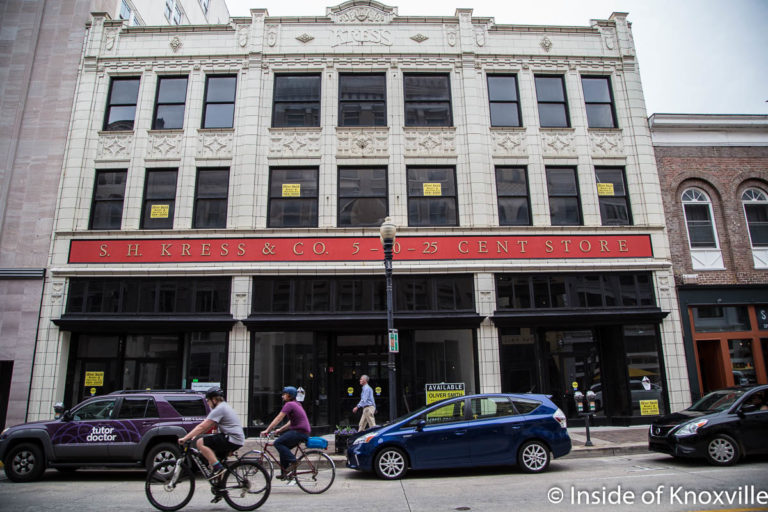 As I mentioned in yesterday’s article, Dave McFarland, current owner of the Kress Building offered to show me around the inside of the building and give me a look at the most recent version of the plans for the building which includes a large basement, three floors and a rooftop space.

It’s a building I’ve given a lot of attention starting in February 2015 when I first toured the building, later I reported approved plans for Wild Wing Cafe, then canceled plans amid a dispute. Most recently I reported that Mr. McFarland returned to purchase the entire building.

The centerpiece of the plans for the building and the literal center of the front of the building is set to be a location for Mr. McFarland’s sixth Wild Wing Cafe restaurant. It’s the largest space in the ground floor and will include seating for about 250 people. There will be a few seats on an outdoor patio, seating inside on the main floor and seating on a mezzanine which will be to the left and rear of the restaurant.

A horseshoe-shaped bar will center the room and will include addition seating. A stage will be built in the rear corner as live music is a focus for the restaurants. Mr. McFarland mentioned a range of genres “acoustic to bluegrass to Journey cover bands.” He said they have live music as many as six nights a week. You’ll also find your favorite sports on the televisions.

To the right of the Wild Wings Cafe (facing the building) is an available retail space of just over 700 square feet on the main floor and around 1500 square feet down a set of stairs, for a combined 2200 square feet. The stairs have yet to be added and a wall will be built in the space to separate it from the Wild Wing kitchen.

To the immediate left (facing the building) of the Wild Wing space is an entrance that access an elevator. The elevator will reach the basement and mezzanine of the restaurant. It will also be the primary entrance and exit for the two upper floors and the rooftop. To the extreme left is an entrance which leads to a stairwell directly accessing the basement.

Plans for each of the floors have begun to take shape for uses, if not tenants. In addition to the commercial space on the ground floor, there are two additional spaces in the basement,  of approximately 1300 and 1700 square feet. About 1800 square feet in the basement will be devoted to food prep, cold storage and a 3,000 gallon grease trap.

The second floor is divided approximately in half, with one half having nearly finished office spaces and the other half more open. Mr. McFarland considers it a good potential co-working space, but client needs could dictate its final configuration. He hopes to have the certificate of occupancy for the second floor by the end of this month.

The third floor includes a large open space. Much of it will remain open for an event space, while a bridal suite will be added to make the venue comfortable for weddings and receptions. It will be connected to the rooftop which will also be available for use as a wedding, reception or other event space. Mr. McFarland is currently developing a similar space in Johnson City.

When the rooftop isn’t reserved for an event, it will be an open-air bar featuring views of Gay Street and offering a capacity of around 200. Small plates would be available and a small warming kitchen will also be located there. The rooftop bar will be a separate endeavor from Wild Wing Cafe. Projected opening for the rooftop will likely be 2020.

The hope is to get the current plans into the permitting process by the end of next week. He hopes to have that process completed in about four weeks, allowing for intensive construction to begin around the end of April or beginning of May. Opening the restaurant is the highest priority and he hopes to have it open for football season.

At the same time, the retail space is being offered by Chad Turner with Oliver Smith Realty and Auction Company. If you’re interested in learning more about one of the spaces, contact him at chad@oliversmithrealty.com or call the office at 865-584-2000.

Mr. McFarland’s excitement about the project and about opening a downtown location was obvious. “I’ve been looking at this building since 2014. When I first came to town in 2007 I was interested in downtown. It took a while.”

The architectural design is being completed by Johnson Architecture. Tillman Construction is handling the build-out.