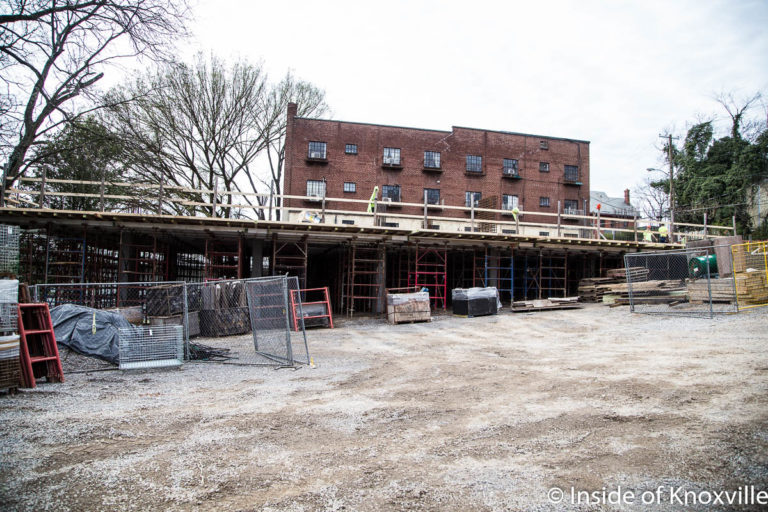 Answers always net new questions on this blog, which is a good thing. Knoxville has a lot of balls in the air at once and I don’t mean the iconic kind. There’s a lot going on here and you all are all about it. So, let’s look at some of the questions from yesterday and a couple of others, plus I’m going to make a sales pitch for a piece of real estate.

A number of people are getting the twenty-six story proposed apartment building, The T at Riverfront, confused with the much smaller, but adjacent development, The Overlook. For those of you who are unfamiliar with these plans, you can find my most recent article giving all the details on the T at Riverfront, here. You’ll find the original announcement and details of The Overlook, here.

It’s The Overlook that has broken ground. The street-level space will be a garage for residents and others who currently own parking spaces on the site, which has been a parking lot. I contacted Josh Wright for a brief update and he said all is going forward and one of the nine units has already been sold.

Interest has been high, he said and the anticipated completion date is summer of 2020. You can see plans and more on their website and anyone interested in a unit should contact Kimberly Dixon Hamilton at 865.405.8970.

The proposed T at Riverfront abuts The Overlook on Hill, but also towers over every building nearby and spreads down toward the river. It will be a very large endeavor and it will be obvious something major is happening when it breaks ground. I reached out to project manager Rick Blackburn for an update and he said:

Regarding the T, the Owners are getting closer to getting financing for the project secured. It is a week to week situation.  The Owner has never shown a lack of commitment to or confidence in the project.  He says it’s not if, but when.  We are proceeding with due diligence towards permitting and final design.

I also reached out to Downtown Coordinator Rick Emmett regarding the questions about the Jackson Avenue Viaduct. He confirmed what was reported in the comments yesterday, that plans at this time call for a July start on the project. Given the short timeline for this prediction, the time seems to have finally arrived. I’ll kind of miss the stalactites hanging from the old one.

I also asked him about the State Street Garage, as I know a number of downtown residents have a vested interest in having that completed. I’d understood that it would be June, but was told by a PBA employee that they were assuming October. He reiterated the June completion date and added that the Crane work would end this week and he hoped the project might even be finished before June.

And to conclude the question-and-answer section, I spoke to Dave McFarland, owner of Wild Wing Cafe and owner of the Kress Building. I told his story last fall. It’s sort of amazing that he’s come full circle to own the building. At that time he said beyond Wild Wing Cafe, plans were still being formulated for the building.

He said they’ve made progress since then and plans are more-or-less finalized for the spaces throughout the building (and on top!). They hope to take the Johnson Architecture plans to permitting in the next week or two. Want to know more? So do I. To that end, he invited me to tour the building today and promised to give me all the details. Expect them tomorrow, right here.

A couple of other things: A friend and sometimes contributor to this blog sent me a note about another closure happening this weekend. It had gotten by me somehow, but there is more construction fun coming your way:

Finally, I’ve got a real estate pitch for someone out there. I have no connection or vested interest and I don’t know the realtor or the owner. It’s the location that caught my eye: 304 Wall Avenue. It’s a street-level address between the most developed span of Gay Street and Market Square. It needs to be converted to retail and it is on the market for 459,900. That’s a lot of money, but the payments might even be less than rent in the area and it would be owned.

It’s a condo now and I’ve been told the way the building was built, retail could not work. I’ve been told by others this is not true. So, do your due diligence, but I can’t help but believe the city would help make retail workable on that street which used to be filled on both sides with just that. You can look at the details here and the realtor is Kristi Dunlap (865-740-2637).