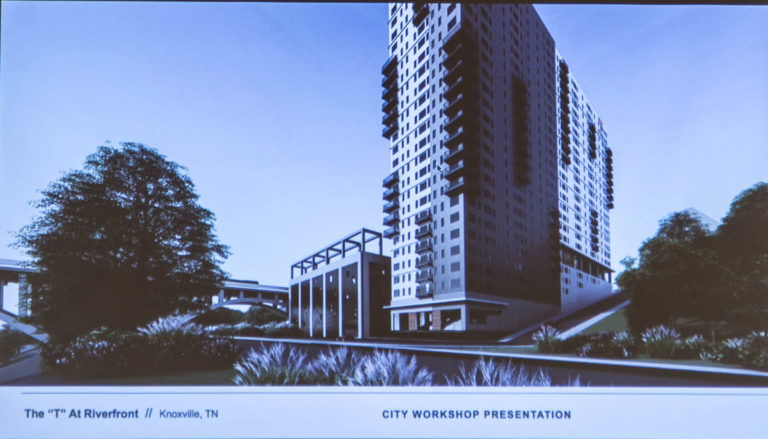 Most Recent Design for the T at Riverfront, July 2018

Is the skyscraper back in vogue? If the current version of the proposed “T at Riverfront,” is constructed, it would be the second tallest building (by stories) in the city behind the First Tennessee Plaza. Its base, however, would be down the bluff from the main elevation of downtown and, so, it would not tower as high as might be expected.

I first reported on the proposed building last April when the group, which includes Gamble and Gamble architects out of Atlanta, Cogent Bay investors out of California, local DIA architects, Blaine Construction and Rick Blackburn as project manager, presented to the Downtown Design Review Board for a second time.

Subsequent to that meeting, the group purchased the property on the bluff between Hill Avenue and Front Avenue. They’ve also continued to refine and shift the proposed building design in response to expense and to suggestions from the review board. The result – and the current rendition of the building – is strikingly different. It’s important to note it could change further in the coming months.

The images provided mostly show the contrast from the previous design on the left, to the new design on the right. The most obvious shift is that the building grew by seven stories to an eye-popping twenty-six stories. That said, there are fewer apartments (267 versus 287 before). There are more beds, meaning there are more high-number (four) bedroom apartments.

Height is only one metric, however, of the changes in design. The entire parking garage has been moved out of the tower and will be an adjacent, separate structure. Parking spaces have been increased to 298. Amenities for residents, including a work-out facility and pool will be located on top of the parking garage. The front and back sides of the garage are slated to have vertical gardens of sort in order to soften the visual impact of massive sheer walls. The garage will be six stories tall and will be adjacent to the Henley Bridge (fifteen feet away).

With the mass of the building shifted to the east, some portion of the views from Hill Avenue will be retained, meaning the existing properties won’t entirely lose their connection to the river, though lower floors would likely have no view. For Hill Avenue, the impact also includes an expanded retail space (now 5,000 square feet) on the corner of Hill and Locust and the previous entrance and exit to the garage on Hill has been eliminated and all ingress and egress from the garage will be along Front Avenue, which will become one-way (west).

Sidewalks will be rebuilt and expanded on all sides of the building, including along Locust. Also, the power lines along Locust will be buried to be consistent with the vast majority of downtown. Hill will still have above-ground power lines. The building will rise nineteen stories from Hill Avenue and above the brick base of the building will be steel, concrete and stucco. 4,000 square feet of retail will be retained on Front Street.

Some questions remain and Mike Gamble, of Gamble and Gamble Architects suggested they are aware of them and continuing to work on issues like providing parking to support the retail space, as well as providing easy pedestrian access. Faris Eid, of DIA, said the work with traffic engineers had taken a lesser emphasis while the building was re-designed, but they are prepared to re-engage them at this point. The chief question remaining there is how that many cars will exit via Front Street, which leads to Old Broadway in the Maplehurst neighborhood just on the other side of the bridge.

The response to the new design was largely positive. Concerns were expressed that perhaps the building could engage the public more – a rooftop restaurant was mentioned. Design critiques included not having the tall white striations on the garage and the lack of an identifiable “top” to the building, which just seems to stop in mid air.

In conclusion, Mr. Gamble suggested the group will be back in short order with additional changes and more information. This meeting was a workshop designed for give-and-take between the board and those involved in the project. A more formal request for approval of the project will come at a subsequent meeting.