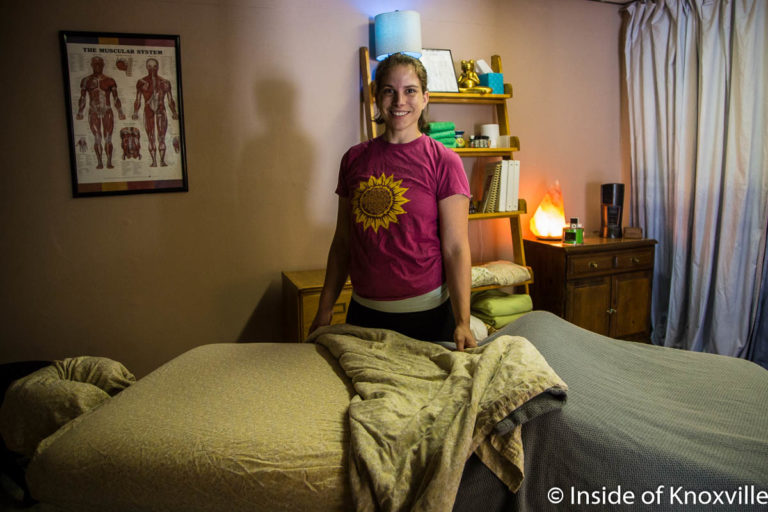 Evelyn Barnette moved her South Knox Healing Arts into a space inside The Bees Knees Hairdressing Salon at 1133 Sevier Avenue across from Alliance Brewing Company. It’s a continuation of her commitment to a lifelong interest in massage therapy and to south Knoxville.

Originally from Gallatin, Tennessee, she left there just after high school even though she had a culinary scholarship to study at Johnson and Wales. She decided to travel, instead, and worked in a French restaurant and a bakery in Sun Valley, Idaho. Mostly she enjoyed snowboarding and some time off. She worked in a resort in Mammoth Lake, California, which is where she met her future husband in 2007.

As fate would have it, he was originally from Knoxville. The couple moved back to the Nashville area in 2009, where he got his degree in nursing and she, now realizing she didn’t love the culinary world as much as she thought she might, got her training and certification in massage therapy. She says she’d always loved massage and convinced her mother to get them for her as early as middle school when she was sore from gymnastics or cheering. “It quickly became something I couldn’t live without. It is so beneficial to my health.”

She graduated in December 2011, got licensed and began practicing in January of 2012 in Gallatin. By the summer of that year, he’d finished his program and the couple moved to Knoxville. He wanted to be near his family, here, and she wanted out of the Nashville area which she said and changed a lot since she’d known it before.

She worked a couple of places out west, but south Knoxville was calling. The couple has lived in south Knoxville since moving here six years ago, renting first and later purchasing a home. In January 2015 when she was offered a space in Everything Mushroom, she grabbed the opportunity. They’d had a therapist there before and she easily assumed her spot.

She says it was slow at first, getting the word out and building a clientele, but the business eventually began to grow. She offered a few yoga classes and movement or yoga classes is something she’d like to get back to in the future. “So many of my clients come in and I can help muscles, but they need to do work on the inside, like yoga and movement.”

When she began looking to move to another spot, she was determined it would remain in south Knoxville. From the time she and her husband visited Knoxville before moving here, the area had appealed to them both. They enjoy outdoor sports and always made time to get to Ijams on those early trips. The fact that she has a sunflower motif for her business (they are everywhere once you start looking) is because she considers the sunflower to be an icon of south Knoxville with the Sunflower fields.

She knew Amy Feener who operates The Bees Knees and the room in the back of the salon seemed like the perfect fit. She opened last week and laughs that when customers show up at the old location and call her, confused, she steps out the door and waves at them just a block or two down the road. “I had worked so hard to build a practice on this street and I didn’t want to move. I love south Knoxville.”

She offers myofascial release, local and distal acupressure and deep tissue massage. She says, “I’m focused on getting in there and finding out the problem. It may not be pleasant, but afterward you’ll feel better. My clients like that it is not just fluffy, but more therapeutic. She makes her own massage lotion.

You can find her via the South Knox Healing Arts Facebook page or the webpage. Hours are 10:00 AM to 2:00 PM Monday and Friday and 2:00 PM to 7:00 PM Tuesday and Thursday. Other times you’ll find her chasing her eleven month old child around. Rates may be found and appointments may be made here.