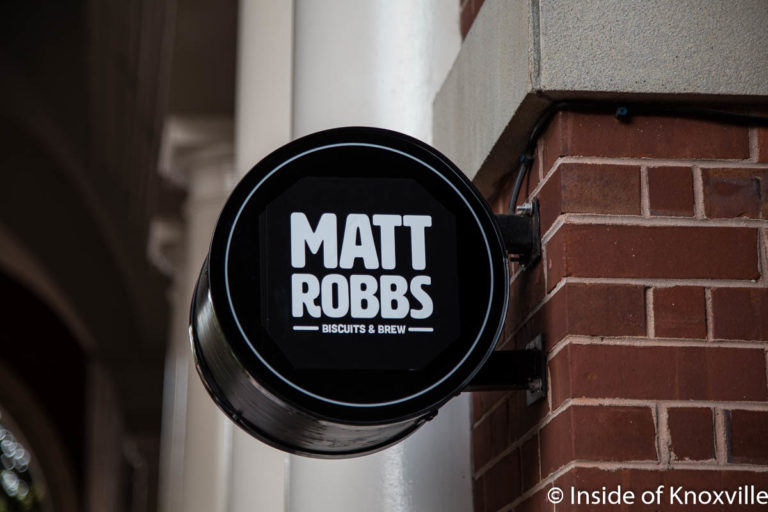 Last April when I first wrote about Matt Robb’s Biscuits and Brew, the plan called for it to open in May. This being July, you might imagine a few misadventures happened along the way. While it took a little longer to open his doors and start serving his amazing biscuits and Counter Culture coffee, open those doors, he has. A grand opening event last Friday and the first day of official business, yesterday, left him tired and happy. And virtually sold out of biscuits.

The opening is still a slight work in progress. He was informed in a final inspection, for example, that he has to replace the household grade stove with a commercial grade stove. Arrangements are underway for that to happen which will give him the stove top for making gravy (something to anticipate).

Of the early success, Matt says, “When you make biscuits like this, you’ll be busy.” I have to confess, I’m not a big biscuit fan. One on a rare occasion will do me just fine. He offered me a taste and I accepted – only to be amazed. It was perfect for someone like myself – the outside was crispy and the inside was a perfect fluffiness without that heavy dough feeling I get from so many biscuits. Just to test my reaction, I took one home to Urban Woman and handed it to her without comment. From the other room I heard, “Wow!”

He’s shifted the delivery method just a bit from his original plan. The new plan is BYOB – Build Your Own Biscuit. He’ll actually help, but you make all the decisions. It starts with his classic buttermilk biscuits. From there you add what you wish. He has bacon, egg, sausage, honey parsley butter, honey and chipotle cream cheese. He says a lot of his regulars from his time at Remedy and Awaken prefer the chipotle cream cheese combined with bacon. Oh, he also house-made strawberry and blueberry jams from made from fresh fruit.

There are also grab-and-go options like an assortment of drinks and Nalads – that’s salads made by his girlfriend Nancy. She makes a fruit and veggie salad that looks great. She plans to add a steak and arugula salad to the offerings in the next few days. Additionally, you’ll find pre-made biscuit sandwiches with chicken salad or turkey and bacon.

It’s not necessarily to grab-and-go, however, there are tables in the beautiful arched breezeway outside and stools lining a window table facing the window with a beautiful view of Market Street. It’s a great spot to take a break for a cup of Counter Culture coffee or a coffee and biscuit, whether you are working in the courthouse or nearby buildings or just a downtowner taking a stroll. It’s open to everyone.

Initial hours are 7:45 AM to 3:00 PM, Monday through Friday. If you’re confused on the location, look at the south end of Market Street under the pretty arch that marks the entrance into the courtyard for the federal courthouse. It’s just inside the arch. If you’re on foot, walk out Market Street from Market Square and three short blocks later, you’re there. Connect with them on Facebook or Instagram.