A Gay Street Business Closes, So Does Part of the Street (and an Art Exhibition Opens Briefly) 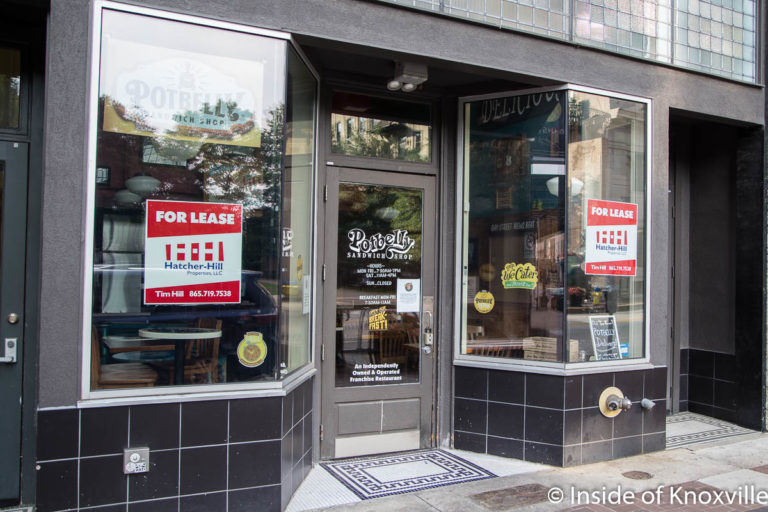 It was just a year-and-a-half ago that I announced the opening of Potbelly Sandwiches at 522 South Gay Street. It was the second Knoxville franchise location operated by the same investment group and operated by local musician and businessman Mark Ray. It took the place of the recently closed Lenny’s Sub Shop at the same location.

In the end, the investor group just couldn’t climb out of the financial hole from the initial cost of building and opening the two shops. Our sales downtown had been steadily climbing, despite not a single dollar ever being spent on advertising or marketing. Technically we were making money each month. Of course what I will miss most are the great customers-we had so many regulars Monday through Friday who ate lunch with us.

Here’s wishing the best to Mark as he looks for new opportunities. It’s hard operating a business in any environment and downtown (or Turkey Creek) is not a low-priced place in which to operate. It also may raise the question of how many of one type of business downtown is currently able to support, with fine sandwiches at Frussie’s and Cafe Vicolo and sandwich alternatives at Subway on Market Square among other places. The closure does open an opportunity for someone who wants a prime location on Gay Street. The space is offered by Hatcher-Hill.

Speaking of closures, how about two blocks of Gay Street? I’d mentioned it before, of course. The intersections are having the brick replaced with a faux brick that looks attractive and is hoped to have a longer life with less maintenance, though repairs have already been done on some of the earlier work.

The interesting opportunity presented by the closures is that the street between the intersections is not torn up. It’s open an available for creative people to utilize as they will. I’ve seen a photograph of citizens playing foosball in the street. My photographs showed some currently available corn hole sets.

It’s a perfect time to get into the street and be creative. It’s a chance for a street party! Presumably restrictions on alcohol in the street still apply, so keep the party dry, but enjoy the street while we have it. And speaking of that, what horrors have been visited on the populace with the closing? Hmm. Makes one wonder if it couldn’t be closed more often. Imagine every weekend on Gay Street . . .

Finally, there was a pop-up art exhibition this past weekend that merits mention. If you’ve been around downtown Knoxville long enough, you’ll remember Kevin Bradley who was co-owner of Yee-Haw Industries and was often seen walking around downtown in a coonskin cap. (He told me the cap was a hit on the west coast, but eventually gave up the ghost.) His letterpress work with Yee-Haw is still highly sought after.

He left Knoxville around 2010 for the west coast where he founded Church of Type in Santa Monica. He has continued to explore and push the limits of letterpress, as seen in the pop up exhibition this past weekend at 132 West Jackson. The work on display this weekend certainly attested to his continuing creativity.

The exhibition was set to close Saturday, but there was some hope its stay might be extended. You might catch a glimpse if you hurry down there. You’ll definitely find some of his work at Rala and you can find him online here. The site includes a gallery of some of the work seen in the exhibition.