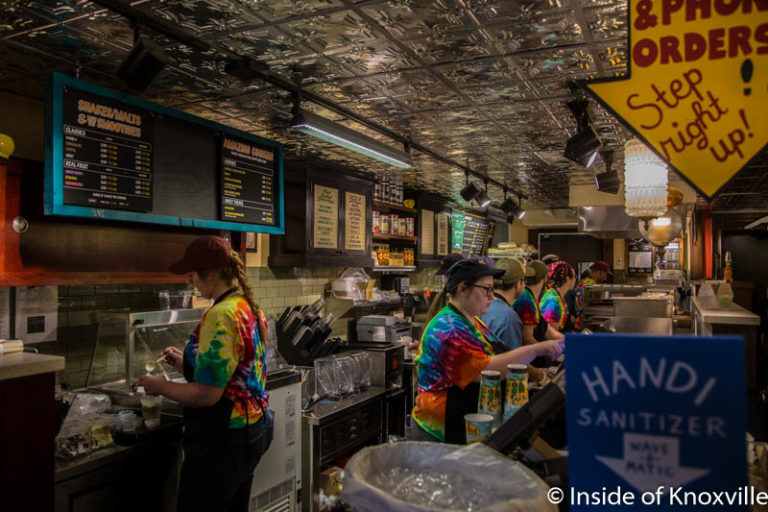 The latest Potbelly location opens today at 522 S. Gay Street. It’s the second location in Knoxville (the first is owned and operated by the same group) and the third in Tennessee. A national chain, there are over 400 shops nationwide. Starting in Chicago in an antique store turned sandwich shop, the restaurants strive to maintain a similar vibe to the store that started them all. You’ll see the potbelly stove just inside the window of our local shop.

Mark Ray, who took a few minutes to talk to me in the middle of the chaos that is part of any opening, will manage this shop while partner Tom Knight will focus on the Turkey Creek location. The two are joined by a group of four investors in the project. The Turkey Creek location was the first in Tennessee and both Mark and Tom have been with it since the beginning.

The group had originally eyed the KUB building just down the street and had plans drawn to occupy that space, but when the building changed hands, that deal ended. The search for an appropriately sized space was difficult, but when they heard Lenny’s would be vacating their building, the group knew this would be the best space for them.

Mark, who also performs as a guitarist with the cover band Hillbilly Jedi, worked training general managers for Panera Bread for eleven years and sees the business models as being very similar, but he feels Potbelly is simpler. After identifying the company as one they liked, Mark and the others traveled to Chicago to check out the company and liked what they found. They went through training, also in Chicago, to prepare for their first restaurant.

Mark is from Knoxville and remembers coming downtown with his mother and shopping on Gay Street and Market Square. As he pointed out, there wasn’t much in the way of other choices: Downtown was the center of activity. He senses that is happening again and since the company favors urban locations, it was a natural step to target downtown. He points out there are 90 Potbelly locations in the urban area of Chicago.

Growing up moving around east Tennessee with his minister father, his roots remained in Knoxville. His wife is from Powell, which is where the two settled while he worked in Oak Ridge with Panera. Given the current opening, he’s spent most of his waking hours the last month in downtown and says the amount of construction is what has struck him the most.

When a new Potbelly franchise opens, senior managers and front-line employees from established stores come to help get the new business started as smoothly as possible and in line with company practices. Support personnel from Chicago and New York are currently helping at our location and will be here until just before Christmas.

When asked to describe the food, Mark says everything is made fresh everyday. Nothing comes pre-cut or partially prepared. Employees are given good training and then allowed to do their jobs more independently than at many stores. He says they are given the opportunity to take ownership and pride in the store.

As you can see on the photographs, the restaurant offers soups, chili, sandwiches and salads, as well as smoothies and shakes. And if you are counting calories, they’ll help you by listing the calorie count for nearly every dish. Sandwiches are served hot unless otherwise requested, but Mark says the 590 degree oven sends them out at a perfect temperature to make the flavors explode in your mouth.

The decor holds a lot of interest and Mark says about 70% of that is left to the local owners. References to the restaurant’s history are included among local references. Mark has chosen to include a significant number of musical references from the Beatles to Elvis. You’ll find expressions of corporate perspective, but a lot of Mark’s personal input. The framed guitar picks are his and the long piece in the hallway featuring guitar picks spelling out “Potbelly,” is his work. He said he did a letter a day while on vacation.

The store’s twenty-one employees have already been busy. Two events on Monday offered a sandwich, drink and chips for a $5 donation to the Alzheimer’s Association. Every store opens with a similar charity event. Additionally, since the opening was delayed a day, he had employees make and distribute hundreds of meals to downtown workers yesterday.

Hours are 10:30 AM to 8:00 PM Monday through Wednesday, 10:30 AM – 9:00 PM Thursday through Saturday and Noon to 5:00 PM on Sundays. Hours may be adjusted to account for demand. You’ll find a full corporate menu here, though the local menu may vary.